Anthony Gagliardi thought he'd be throwing topwater, but the Carolina-rig proved to be a better presentation.

Ticonderoga gets a lot of buzz at Champlain. Big largemouths swim there, and it propelled Tim Horton to a dominating and memorable Bassmaster Elite Series win a few years ago.

The area – site of a famous Revolutionary War fort – reared its head at last week's Champlain FLW Tour, but it petered out over the final 2 days, largely because big winds on day 2 kept Clark Wendlandt and Dave Lefebre in the north end (Kyle Mabrey and Mike Hawkes made the run). And that cold front seemed to funk out the Ticonderoga fish on day 4.

Instead, north-end smallmouths and largemouths dominated this event. Scott Martin won with Missisquoi Bay largemouths. Here's how the rest of the Top 5 caught their fish.

After his practice, Anthony Gagliardi (who fished north) figured on a topwater bite. He caught two 4-pounders the first day on a Lucky Craft Sammy, but the bite slowed and he had to scrounge around and eventually weighed two bed-fish and one dropshot fish.

There was no topwater bite the second day and all his fish came on a Carolina-rig. He weighed four smallmouths and one largemouth.

Day 3 was all about the Carolina-rig again. That was the windy day, with a 20 mph south blow. "There were 5-footers where I was fishing and I wasn't able to fish it," he noted. "One thing about the place was there weren't a lot of fish, but the ones that were there were big. But it wasn't a huge school. You really needed to sit still and fancast."

He struggled that day and weighed just four fish, which in the end was the difference between 1st and 2nd place. He did have his fifth fish on – one he estimated at about 5 pounds – but it shook off. "It was probably the biggest smallmouth I ever hooked in my life," he said.

He described his area as "a flat – a grass flat. The first day the topwater fish were on isolated rockpiles. Then I moved up on the flat. It was a pretty expansive flat and each day they moved, so I had to fish around."

The flat was fairly uniform at 12 to 14 feet deep with a "couple of high spots here and there."

He added that the fish basically wouldn't bite a topwater in wind, and he thinks that's because the wind pushes the grass down and the fish "settle down" underneath it.

> His topwater bait was a Lucky Craft Sammy 100 in ghost-brown. 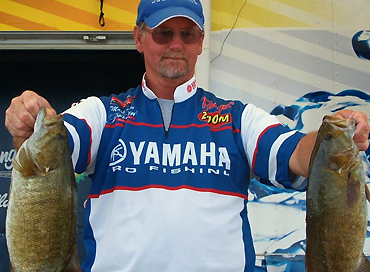 
Mark Hardin worked the tip of a flat with a jerkbait and Carolina-rig.

Mark Hardin led days 1 and 2 on the strength of a single smallmouth hotspot. He was blown off the spot on day 3 and a 20-pound day 4 wasn't enough to overcome it.

He described his spot, which was in the north end, as "a flat that runs out there, and there was a point that stuck out on the end of the flat. It was way out there – maybe 500 or 600 yards from shore. It all tapered gradually out to about 18 feet, but there was a spot where it jumped up to 15 feet on the end. That's where they were.

"There was a little bit of grass on the bottom, and smaller rock," he added. "There wasn't a lot of grass there."

He worked the spot with a jerkbait and Texas-rigged craw. 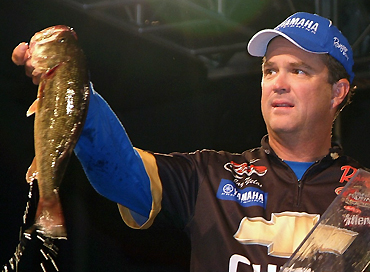 
Jay Yelas says he fished Scott Martin's winning area a little bit, but couldn't figure out how to catch the big ones.

Jay Yelas fished the Missisquoi and caught his fish three different ways: He pitched milfoil with a jig, fished offshore rockpiles with a big worm, and also skipped a jig around docks. The milfoil and rockpiles produced most of his fish, but he caught 5-pounder the first day and two 4-pounders later on docks. 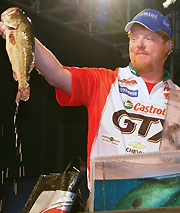 
Kyle Mabrey was the only pro in the Top 5 who fished Ticonderoga.

Kyle Mabrey spent all 4 days at Ticonderoga, where he cranked deep milfoil edges.

"The best (edges) were when my boat was sitting in 12 to 13 feet of water," he said. "I was casting parallel to the edge and the main thing was getting it tight to the grass edge and cranking is down (the edge). A lot of fish bit when the bait first got down and out of sight – just four or five turns of the reel handle."

He also added a few flip-fish.