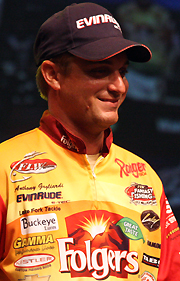 Anthony Gagliardi has yet to make a decision about his Gamma sponsorship – he's waiting to see a revised contract.

It's a function of the times that companies both within the sport and without have trimmed their expenses. Ad spending and marketing budgets are in a precipitous fall, and that leaves pro bass anglers in a precarious position since many make their primary living off marketing sponsorships – not prize winnings.

So far, a lot of the sponsor fallout has come from without – non-endemic companies like Advance Auto Parts, GE Silicone and Evan Williams have dropped their title-sponsorships of pros.

But cuts are starting with the endemic companies as well. One example? Gamma line. Although that's an especially curious case, since at least a few former Gamma pros think the recent cutbacks there weren't necessarily economic.

BassFans may remember when Gamma Technologies first entered the fishing scene. The year was 2005 and Gamma, a tennis and sports company, had recently applied its molecular-alteration technology to fishing line. The first product was Frog Hair fluorocarbon fly fishing leader. But in the summer of that year, Gamma product line manager Tom Ference attended the Cabela's Top Gun Championship and set up a small table at the registration dinner.

Gamma put up a modest contingency for Top Gun, and several pros like Hackney, Chapman and Terry Scroggins first used the line that week.

A central component in both trends – Lucky Craft with hardbaits and Gamma with line – was the pros. Even though Lucky Craft had a modest (call it non-existent) pro staff when its product first hit North American shores, word of top-ranked pros throwing Pointer Minnows spread through the sport like a wildfire.

In terms of Gamma, the angling public trusted faces like Hackney, Scroggins, Chapman and Lefebre. And it was Lefebre who'd been with the company longer than any other and in fact was the one who convinced Ference to attend Top Gun and charge headfirst into the bass market.

For the following 2 1/2 years (2005–08), Gamma could certainly be called a success. The top-shelf fluorocarbon battled it out in the already crowded line market (largely controlled by Pure Fishing) and is now carried by national retailers and local shops. It's been featured in key media alongside (and often atop of) longstanding brands. And its heavy-hitting pro staff has won marquee events and titles.

But as the dawn of 2009 approaches, the face of the Gamma pro staff will look decidedly different. Leaner would be an apt descriptor. Perhaps emaciated.

Of those, only a handful plan to continue with the company, if that.

Several calls placed to Gamma by BassFan went unreturned, so there's no official word from the company about who's on staff now or who isn't, or the reason for the upheaval. However, BassFan did speak with each member of the Gamma pro team, and it appears that Gamma's offer for 2009 was substantially different than it was for 2008.

That's a contributor. Some pros mentioned too that their relationship with Ference, who's no longer with the company, was also a decisive factor in their decision to stay or go.

Matt Herren, who's making the jump from the FLW Tour to the Bassmaster Elite Series next year, told BassFan that he's leaving Gamma.

"I was released – basically, they released all the pro staff," he said. "We all had our negotiated deals, and for whatever reason through the fall we went back and forth negotiating contracts, then all of a sudden they released us. They say they didn't, but we went from being a paid pro staff busting our heinies to promote a product, to where we're only going to get a discount on the product. That's not something that I'd do.

"I'm very disappointed," he added. "I worked extremely hard pushing their brand in the Southeast. I'm responsible for getting it in the largest independent retailer in the country and in with a lot of rep groups. And I had a great relationship with Tom Ference, who was over the pro staff. It's an incredible product. I'm really disappointed this is what happened."

Herren noted he's "in negotiations" with another line company that "isn't a big player in the U.S."

Also notable was Herren's reference to Ference, who as stated used to oversee the Gamma pro staff. Ference is no longer with Gamma. Ference told BassFan he was let go by Gamma more than a year ago – the day after he testified in court in support of another former employee who was suing Gamma. Pro staff duties at Gamma now reportedly fall to Douglasse Sieber.

So the fact that Ference is gone may have much to do with the fallout – at least it does for the next pro, Lefebre. 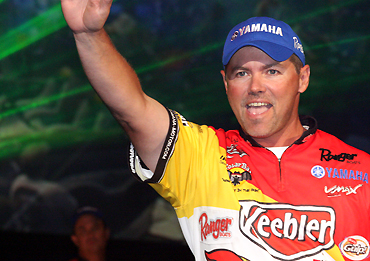 
Dave Lefebre's decision to leave Gamma was personal as well as financial.

The most vocal pro in the Gamma fallout is certainly Lefebre – again, the pro who'd been involved with the company the longest. When Lefebre first got involved, Gamma didn't even have a bass line yet.

"Originally, I was approached by Tom Ference back in 2004 for my opinions on how the line would work for bass fishing," Lefebre said. "Soon after that, I took Tom with me to BassFan's Top Gun. Fast forward to now and I've never let up, and neither did most of the anglers that started with the company way back then.

"I promote companies that are respected and have good morals and good people," Lefebre added. "Tom Ference was one of those rare, good people who loved his job, worked his tail off at it, and was very, very skilled at what he did. Tom was Gamma as far as I'm concerned. I met him through Gamma and he's still a very good friend of mine, but when he left Gamma, good and morals went with him, in my opinion."

Lefebre said that he was "thinking of quitting" after Ference departed. Then he spoke with Gamma VP Ron Carr and that convinced him to make a change.

"According to my last conversations with Ron Carr at Gamma, this whole deal had nothing to do with the economy, but that the pro-staff simply had not and was not working – totally ridiculous in my opinion," Lefebre said. "I feel they did us wrong, used all of us, and then spit us out. On the flipside, I think we're all excited to move on – I know I am."

Lefebre plans to fish for Berkley and Spiderwire next year.

About his status with Gamma, Jeff Kriet said: "I'm going to go in a different direction. The guy I signed my deal with, Tom Ference, was a pretty nice guy and we worked out a good deal. The new group that came in – I'm not sure the direction they're wanting to go. I just feel like it was going to be more of a hassle than I probably wanted to deal with for free line.

"If you deal with a company that makes line, the amount of line you use or need isn't something that needs to be questioned," added Kriet, in reference to what he said was a restrictive line-allocation policy that forced him to buy some of his own line this season. "I wasn't going to get enough line to last me halfway through next season, so it's easier to go buy line than mess with the hassle."

He noted that he'll likely sign a line-endorsement deal with Lake Fork Tackle for its new fluorocarbon.

Chapman, who suffered several hits to his portfolio this fall, including the loss of title sponsor GE Silicone, said this about his status with Gamma: "They've changed my contract for next year. It's kind of unfortunate, because it seems like whole industry's doing that right now. I'm keeping my options open." 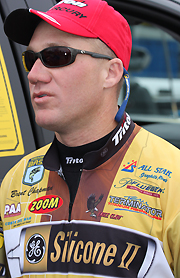 
Brent Chapman, who lost several of his sponsors this off-season, will stay with Gamma for now.

"At this point, I'm waiting to see," Gagliardi said. "They're sending (revised) contracts out to everybody. I at least want to see it before I part ways – make a decision after I see what they're proposing. So at least for now, I'm still with them."

Kota Kiriyama hasn't had a chance to discuss things with Gamma, he said. He just got back from Japan, where his father recently passed away after a long fight against kidney cancer.

Like Kiriyama, Andy Morgan hasn't had much of a chance to iron out his Gamma status. He's also been away, although on a less serious note. Morgan's been hunting for the past 6 weeks.

Hackney was the No. 1 ranked pro in the world when he first involved himself with Gamma via a handshake at Top Gun, and he was a key signing for the company as it entered the bass market.

About his current Gamma status, Hackney said: "I'm going to be honest – I basically feel like I got fired," he said. "I feel like we really benefited the company – a company that really wasn't known. In fact, until I spoke with Tom Ference (at Top Gun), I hadn't even heard of the company. I felt like we were a big plus for them, and I actually felt we could have helped them through these hard times. Now they're turning their backs on that."

Hackney also noted: "The biggest thing is, if you've got a bait out there that's going to catch them every time it hits the water, if you don't have somebody out there to show folks how it works, how's anybody going to know about it? It'll be interesting to see what happens with them down the road." 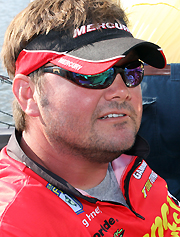 
Greg Hackney, who first became involved with Gamma in 2005, says he feels like he "got fired."

Hack didn't reveal his line plans for next year, since he's still under contract with Gamma through the end of this month, but he did say he plans to use "lots of braid."

"I'm definitely off the team," Alvin Shaw said. "When it came down to it, they were unwilling to compensate me for next year. There's a lot of other companies out there that would love to have me representing them. Am I disappointed? Yeah. The management (at Gamma) has really not appreciated where we brought the line in such a short time. I just don't think they understand the (pro) marketing part of it."

Shaw is now with Berkley for line.

For Scroggins, his decision to leave Gamma was about the money.

"They said they're restructuring their pro staff, and they're not going to pay any of their pro staff," Scroggins said. "That's fine, but I'm not going to promote their product for free. They've got good line, and there are several companies that have good line. As I told them, I can pick up the phone and get free product wherever I want – it's just a matter whose do I want to use."

Scroggins doesn't have a plan in place for line next year, but will "look around and see what's available."