BACK
Fitness For Fishermen 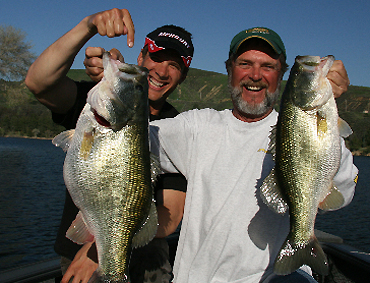 Troy Lindner poses with father Al, pointing to the fish he caught.

Injuries in pro fishing continue to mount. After legends like Mark Davis, Larry Nixon, Zell Rowland and Denny Brauer had their go-round with orthopedic problems, the next generation of anglers began to suffer fishing-related injuries.

Luke Clausen, Mark Tucker and Dustin Wilks are but a few examples. All had surgery within the past year or two to fix elbow or rotator-cuff problems.

Fact is, there are a lot of techniques in fishing that are brutal on the upper arms. A short list would include punching mats, sidearm roll-casting and spooning.

Although there's been a decided trend toward conditioning among some fishing athletes, there's room for a whole lot more. And one new tool that'll soon be available is a new 30-page booklet aimed strictly at anglers.

The booklet's author is Troy Lindner, who brings several talents to the table.

First is his lineage. He's a member of the famed Lindner clan, and his father Al, uncle Ron and cousin Bill have all suffered fishing-related injuries of one form or another.

Second is his line of work. He's a personal trainer and owner of California Complete Fitness in Los Angeles. His list of credits there includes strength and conditioning training for Olympic swimmer Amanda Beard.

Third is his own familiarity with fishing, and tournament fishing in particular. He's an up-and-coming pro who's climbing the ranks of the Western Strens and FLW Series, as well as several California circuits in which he competes with partner and Big Bass Zone author Bill Siemantel.

"This booklet is about combining my two passions – to bring my knowledge of exercise and nutrition, and ally it with the modern fisherman," Linder said. "It'll show them what exercises they can do to become better fishermen and avoid injury, and will give them guidelines on what to eat so they'll fish better, catch more fish, and fish a longer and healthier life."

Lindner noted that, even for pros who are health conscious, it can be a challenge to maintain a regimen while on the road. Challenges include meals on the fly, long hours on the water and cramped motel rooms.

That's why his booklet opens with examples of exercises BassFans can do right in their hotel rooms.

"The first chunk of the booklet is about exercises you can do with a water bottle, towel and the floor – without any other equipment," he said. "They're the same ones I do on the road just to kind of keep tuned. They're ones you can do after you come in from hours and hours on the lake.

"And they're definitely preventative," he added. "The exercises and stretches are specifically geared toward the hours in the boat, straining, leaning over, repetitive casting. Their aim is to correct postural problems – straighten out the spine, keep the shoulders back, hips level. That helps ease any pain from the shoulders, hips and feet."

Other portions of the book will deal with nutrition.

Lindner said the free booklet will be available soon. He'll be giving it away for free at all the western FLW Outdoors events, as well as several FLW events further east. They'll also be available at West Coast sportshows, and perhaps by special request.

And more volumes are coming, he promised. "They'll be more in-depth and deal with exercise bands, dumbbells and other things. This first one's just aimed at exercises and nutrition for the road – preventative and corrective – until you can get into a gym and get a full workout in."

> Lindner recently competed in the Stren Championship at Table Rock in Missouri. Al and Ron joined him after the event for some fishing at Bull Shoals. "That was the first time I can remember being in the boat with both of them," Troy said. "Both of them were telling me how to position the boat, where to cast, what to do. Both were telling me totally different things, and of course, both thought they were right (laughs)."

> Below is a sample page from the booklet that deals with nutrition.

In competitive fishing, just as in many sports that require continuous physical movement over protracted periods of time, renewed caloric energy intake is required. Today we know a lot more about these things than we did when professional tournaments began back in the 1960s.

Few sports take as long a time to complete a round as does tournament fishing. Portal to portal (from and back to) your motel room usually takes about 12 hours (5am to 5pm is quite common). Normal eating patterns and other bodily functions obviously are disrupted.

Make no mistake about it, your body – just like your outboard engine – runs on converted energy. Ingesting just a little bit of the wrong stuff – like placing sugar or water in your gas tank – can cause big problems. So too can wrong food and drink. In years past, and in fact even today, some pros feel they can run all day on caffeine, nicotine and adrenaline. Today, we know you can keep the adrenaline rush. But to be at the top of your game, you'd better drop the caffeine and nicotine.

The true goal of nutrition is to keep the fishing contender focused and fueled. When I was at the Olympics in Beijing, believe me, nutrition was at the heart of every athlete's training program.

Fishing is usually an endurance activity, rather than requiring numerous bursts of energy affairs. So you need sustained energy paced throughout the day. This booklet is not the place to get into the fine points of nutritional training. However, be aware that what you eat can have a great effect on how well you can perform all day long.