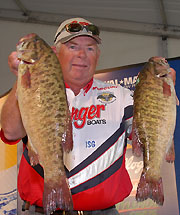 Local Steve Clapper says he's having difficulty finding the quality of fish that propelled him to a win here last year.

Throughout the year as certain tournaments approach, there's really not much debate as to what the dominant pattern or bait will be on that body of water. This week's FLW Tour event at the Detroit River isn't one of those tournaments.

Angler's competing this week can choose from a number of viable options. They can fish Lake Erie, or they can head to the smaller Lake St. Clair. Or they can ditch both of those options and cast their lot in the Detroit or St. Clair rivers.

And then there's how to fish. When the bountiful bronzebacks that inhabit these waters make their annual summertime journey offshore, dropshots and tubes are the only way to go. But reports from the field say that these fish haven't made the mass exodus to the deep stuff yet, and that means they can be caught on hardware - like crankbaits and jerkbaits - up closer to the bank.

This system is absolutely loaded with fish, and finding numbers doesn't seem to be a problem for most of the pros BassFan spoke with. However, a limit of 2- and 3-pounders won't do you much good here. The 20-pound limit is the winning benchmark for these waters, and finding a way to consistently boat 4-plus-pound smallmouths is the key to assembling that kind of sack.

Before getting into more bite information, here's more about the fishery itself.

The big question that's always on everyone's mind when any tour-level event visits the Detroit River is where the majority of the field will spend their time. The two obvious choices are lakes Erie and St. Clair, but the river bite can't be glanced over, either. 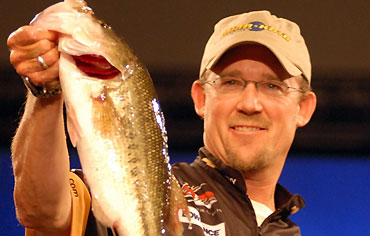 The typical mindset in past years has been that Erie holds better quality fish, while St. Clair holds the numbers. That'd make Erie the obvious choice, but the quandary lies in the fact that Erie is a beast. High winds can blow in without warning, and when they do, Erie turns into a washing machine.

Current forecasts show the winds staying below 10 mph throughout every day of the tournament, and you'd think that'd lead just about every angler in the field out to the big pond, but that's not the case according to Michigan stick Art Ferguson.

"There'll definitely be more people on St. Clair this year," Ferguson said. "I'd say the field will probably be split about 50-50 between the two - maybe even a little more in St. Clair. Erie always plays a big factor, but St. Clair is holding its own.

"It seems like in the last couple years some Erie-style fish are moving into St. Clair, and that's encouraging," he added. "I think this one could definitely be won out of St. Clair. That's where I'm going, and I'm not fishing for 2nd place."

"I really personally think the tournament will be won in St. Clair," Clapper said. "There are good quality fish in Erie, but there are some St. Clair gurus in this field, and they'll figure out how to catch some good weight in there.

"The thing about Erie is that there's just so much water to cover. With the different practice rules guys can't spend weeks out there looking at every nook and cranny of Erie, so that makes St. Clair a little more appealing, because it's so much smaller."

And then there's the river bite. Granted, 99 percent of the field will be in one of the lakes, but the rivers have been known to cough up some heavy stringers from time to time.

"There's a possibility the rivers could play," Ferguson noted. "I checked the river one day. There's definitely potential in there, but the bites are slow to come. If somebody went in there and focused on just getting five bites a day it could happen, but I won't be spending my time there."

Every angler BassFan spoke to all agreed on one thing: this fishery is running about 2 to 3 weeks behind schedule compared to when the FLW visited here in 2007. The tournament is taking place on virtually the same date as it did last year, but a mild summer combined with lots of rain in the region have kept water temperatures and the fish a little out of whack.

"If you compare this event to last year, it's just going to be tougher all around," said Erie ace Dave Lefebre. "I haven't talked to a whole bunch of guys, but the few I've talked to are all crying the blues. I'm not sure how much you can listen to that, because everybody does that at every tournament. But the bite is definitely off from what it was when we were here last year." 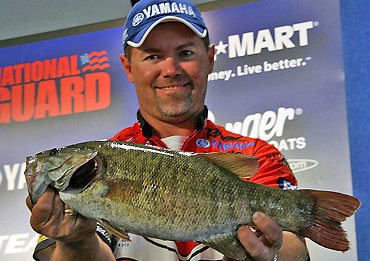 
Finding numbers of fish has been no problem for Pennsylvania pro Dave Lefebre, but quality fish are a different story.

'Tough' is a relative term. Lefebre said he and a partner caught over 150 fish during a practice day. It's the quality bites that are tougher to come by.

"Don't get me wrong, we're still going to catch them," he said. "But those 20-pound bags that won it last year aren't going to be easy to find. I'm sure somebody will find a concentration of fish and put together a big sack, but overall I expect the weights to be down."

Last year water temperatures were hovering in the mid-70s in most places and pushing the 80-degree mark in others. Reports from this week's practice are putting temps in the low 70s, which has fish closer to their post-spawn mood than their summertime routine, and that's what's slowing everything down.

Clapper admitted that he's having difficulty getting on a bite similar to the one he found last year.

"Last year this lake played into what I like to do, which is get out deep and fight those waves on Erie," he said. "I've been spending 14-hour days on the water and that should tell you something. If I had something better figured out I wouldn't have to stay out there so long.

"You've got to watch out, though. That summer transition can literally happen overnight. One day you'll go out deep and there might be one or two big fish on a piece of cover, and then the next day it'll be loaded up. That's what I'm hoping will happen during this tournament."

Last year's event turned into a dropshot war with so many fish positioned offshore, but with fish being more scattered throughout the water column, many anglers are predicting that power-fishing tactics could play a big role in this tournament.

"I've caught fish up in 2 feet all the way out to 40 feet," Lefebre said. "This year isn't going to be dominated by that vertical dropshot stuff like we had last year. They'll still eat the dropshot, but you can catch them with other stuff, too."

Clapper noted: "I think power-fishing will really play a role in this event, especially in St. Clair. Jerkbaits, spinnerbaits and crankbaits should all get some bites. But the dropshots and tubes will catch 'em, too. You're going to see a bunch of everything up there. This isn't going to be one of those deals where one style really runs away with it. It's anybody's game.

"This one could be won out deep with a tube or a guy could win it on the bank with a spinnerbait," he added. "It all comes down to finding a concentration of big fish that will last for 4 days."

In no particular order, here are BassFan's recommendations on the Top 10 to watch at this event.

1. Joe Balog – This event is setting up in such a way that it could heavily favor the locals who can fall back on past experience and intercept the post-spawn bronzebacks ready to make the trek out to the abyss. Balog's record on Erie is tough to argue with. Look for him to be in the mix.

2. Steve Clapper – He's singing a sad song about his practice, but his knowledge of the fishery makes him impossible to pass up. And he's one of the few anglers who thrive when the Erie wind starts to blow.

3. Dave Lefebre – He was noticeably candid about his practice, and that's usually a sign a guy is on to something good. Add that to the fact that he's a stud on these waters and that makes him a solid pick to finish high.

4. Kevin Vida – He's a known bronzeback buster and is certainly no slouch when it comes to this area. And you can bet he's looking to finish out the season strong after failing to cash a check at Ft. Loudoun-Tellico.

5. Trevor Jancasz – Another local who always seems to show up big on these waters. He nabbed a 6th-place finish here in 2007.

6. Art Ferguson III – He's a tube-tossing machine and in his own words: "They're eating the tube pretty good." He's in his comfort zone and should have no trouble putting together a high finish. 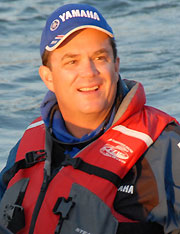 
Jay Yelas is one of the few anglers who've managed to find fish holding in a summertime pattern.

7. Terry Baksay – He notched a 3rd-place finish here last year by jerkbaiting on St. Clair. That type of bite could be even better for him this year.

8. Vic Vatalaro – If winning fish are to be found in St. Clair, Vatalaro probably knows where they are. His highest finish in 2008 is 43rd at Toho. He's looking at his best opportunity for a Top-10 showing this week.

9. Bryan Coates – Another local who needs to be watched. He scored a 28th-place finish here last year and the local advantage should play even heavier this time around.

10. Jay Yelas – Yelas told BassFan that he believes he's on a group of fish that could put him in the Top 10, and he's never been one to blow smoke. Scroll down to the notable section to find the link to his practice report.

The FLW Outdoors Family Fun Zone will be open from noon to 6 p.m. at the Cobo Center each day.

Here's the forecast for the tournament days.

> Jay Yelas had a good practice and thinks he could compete for a top spot if everything goes as planned. To read his report, click here to go On Tour With the BassFan Big Sticks.

> Usually concentrations of fish play a big role this time of year on Erie and St. Clair, but Ferguson noted that he's been finding big fish mixed in with groups of smaller fish. "You just have to keep going through them until you get the right one," he said.

> "My best fish are coming in the 16- to 22-foot range," Clapper said. "I've caught them as shallow as 4 feet and as deep as 26, but right about 20 seems to be where I'm finding them best. That could change overnight, though."