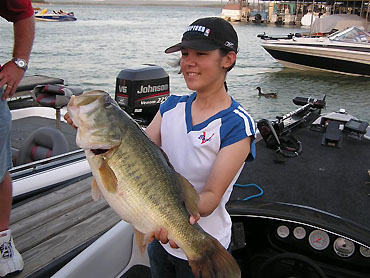 Tiffany Spencer founded the bass fishing club at the University of Texas at Arlington just last spring. The school will be represented by three two-angler teams at this week's National Collegiate Bass Fishing Championship.

(Editor's note: This is part 2 of a 2-part story on the state of collegiate bass fishing.)

Participation in college bass fishing has increased dramatically over the past couple of years, primarily due to the formation of an organizing body for the sport (the Collegiate Bass Anglers Association, or CBAA) and the launch of the annual BoatU.S. National Collegiate Bass Fishing Championship (NCBFC).

The second edition of the NCBFC will take place this week (Thursday through Saturday) at Lake Lewisville in Texas. With nearly 90 two-angler teams registered, representing nearly 50 institutions, the event is about twice as big as last year's inaugural tournament.

Those involved, of course, hope that college fishing continues to grow, but they all realize there are obstacles. One of the biggest is access to boats.

Not many college students own fully equipped bass rigs. Some have parents who do, but more than one college club has fallen on hard times due to the graduation of members who could provide on-the-water transportation.

The CBAA tries to alleviate that problem with the help of The Bass Federation (TBF). When a school informs the CBAA of its interest in starting a club, the CBAA contacts local TBF officials to see what can be worked out.

"There are a few fortunate clubs that have had boats donated to them by alumni or professors or someone else," said CBAA co-founder and commissioner Troy Heckaman. "But overall, the availability of boats is probably the biggest hassle.

"We try to work with the local groups and see if we can get them to partner with the colleges and provide some opportunities locally. I have nothing but good to say about the TBF – they've helped us out in that area, and they've also been willing to assist with weigh-ins and just about anything else we've asked for."

On the bright side of the financial picture, the fishing industry has embraced the college game. The sponsor list for the NCFBC includes Ranger, Yamaha, Cabelas's, Garmin and many others.

It didn't take much salesmanship to get most of them to come aboard. In fact, in some cases, it was the company that made the initial contact.

"We didn't have to go to them – a lot of them were calling us asking, 'How do we get involved,''' said tournament director Wade Middleton, who'll also produce coverage of the NCFBC for Fox College Sports. "They recognized that this thing is growing."

FLW Tour angler Michael Murphy, a graduate of Purdue University and a former president of that school's fishing club, worked in the marketing and publicity departments for Spro and Shakespeare before becoming a full-time tour pro. He said the industry is fully aware of what an investment in college fishing can bring down the road.

"When you look at people who are in college, in just a year or 2, they're going to graduate and get a job and have more income than they've ever had before," he said. "They won't have a house payment, and for the first time in their lives they'll have buying power – probably more so than a 40-year-old guy with a wife and two kids and a house payment and a truck payment.

"The industry sees this as a huge market. These people are the future buyers."

Up from the Ground Floor

Some of the well-established college clubs receive substantial backing from sponsors – not just in the form of product, but also money for travel and other expenses. Conversely, those just starting out often have to resort to old-fashioned fundraising events like car washes and spaghetti dinners.

The University of Texas at Arlington will have three teams at Lewisville, which it can afford only because of the short travel distance. The club was formed just last spring. 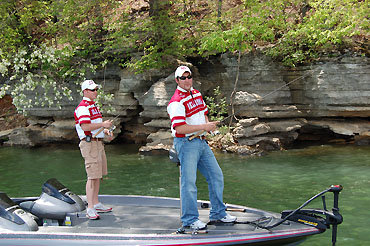 
Jarrett Morrison (left) and Justin Hurd comprise one of three University of Oklahoma teams that will compete in the NCBFC.

"We have about 10 people right now, but we're in the middle of recruiting, so that's fluctuating," said Tiffany Spencer, who founded the Arlington club and is one of a handful of women who'll compete this week. "Right now, just about everything's coming out of our personal money. We haven't been around long enough to have had any fundraisers.

"We have a lot of ideas (to generate funds), but nothing's set yet. They're all pretty vague right now."

Where Will it All Lead?

It's too early to say where bass fishing will ultimately end up in the overall scheme of collegiate athletics. As a "club sport," it receives no official recognition or backing from the schools, although some teams are able to draw from funds set up to support all of the institution's affiliated clubs.

If it were to ever achieve varsity status, the schools could provide money for equipment and transportation, and even dole out scholarships.

There'd be a downside to that, though – the whole thing would fall under the control of the NCAA and its myriad of rules and regulations regarding what an athlete can receive without paying for it.

"Some people have a lot of desire to see it get to that level, and some don't," Middleton said. "Right now (the sponsors) can really help these kids. If the NCAA got involved, nobody could give them a rod or a reel, and it would end up limiting the ability of an unknown (smaller school) to come up and beat the big powerhouses.

"I'd hate to see it get to that point because I'm just so energized by these kids' passion. They'll go somewhere and sleep five to a room and they'll spend their last $5 to buy a spinnerbait. How cool is that?"

> North Carolina State's Alex Freeman won last year's NCBFC fishing with the since-graduated Chad Craven. He'll try to defend the title with new partner Randall Hess. "I think we have a chance, but it'll be tougher this year. There's a lot more teams, and not as much practice time (due to pre-tournament sponsor events)."

> The CBAA recently created an athletes' advisory council comprised of 15 students from all regions of the country. "They're all involved in club leadership and they're people we can bounce ideas off of," Heckaman said. "We try to find out what's important to them and what they think is important for the sport."