Plastics A Big Key For Delong And Rook 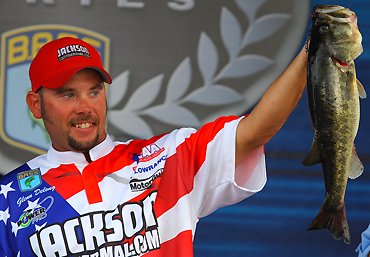 BassFans yesterday read about Bill Smith, Jr. and Brent Chapman – how they camped at the recent Toho Bassmaster Elite Series.

What follows is how 4th-place Glenn Delong and 5th-place Scott Rook caught their fish. Delong made a critical bait change, while Rook largely stuck with a Carolina-rig, although he did catch a key flip-fish.

Rookie Glenn Delong had what he described as the tournament of his career. It moved him up in the final points standings and he requalified for the Bassmaster Elite Series, which was his primary goal. The money and status of the Top 5 were just gravy.

He started strong with 15 1/2 pounds, then tapered off, but never suffered a sub-10-pound day like so many others in the field. In other words, he held the line all 4 days.

He fished Kissimmee, down near Jack's Slough, where he concentrated on flipping the first 2 days.

"I caught most of my keepers flipping a NetBait Paca craw," he noted. "I was flipping in thick hydrilla. There were little clumps of hydrilla – little 3- to 4-foot circles of it – with some wood scattered in-between."

He said that was his "main pattern," but on day 3, he switched up a little. And another key for him was the brief topwater window in the morning, which was good for a fish each day.

"I kind of picked up on the Fluke deal in some of the hydrilla outside the area I was fishing," he said. "The water was a little deeper, and (the last day), that's basically what I did."

> His caught a topwater fish each morning on either a Brian's custom propbait or Yellow Magic Magnum popper.

> Main factor in his success – "The biggest thing was getting a good topwater bite in the morning. It only lasted for an hour, and it was an hour ride down there."

> Performance edge – "My rods and reels, definitely. The rods are so sensitive I can feel everything. And the reels are dependable. I can cast what seems like a mile, and the Revo outcasts every reel I've ever used." 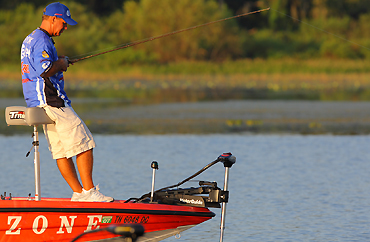 
Scott Rook fished a popular area on Toho, where he keyed on shell-beds.

When Scott Rook began day 1, he didn't have much of a feel for his stuff. Like others, he decided to just start on an area in Toho where he'd gotten some bites in practice.

He had plenty of company, because Kevin VanDam, Kevin Wirth and Casey Ashley had all found the same fish. Plus, he invited his roommate Davy Hite to join the fray.

Rook boxed a limit in the first 30 minutes of fishing, at which point he waved Hite in. Problem was, Hite didn't catch more than 5 pounds, but his co-angler whacked over 20.

When Rook returned the second day, the fish were gone. "I didn't catch anything," he noted, and his 3 1/2 pounds dropped him from 6th to 38th.

He added: "The window of opportunity was real short on those places. They were shell-beds, and I was Carolina-rigging. They'd bite for about 2 1/2 hours, then just quit."

With his shell-bed spot in unwind mode, he started day 3 on what he considered a secondary area. It was another shell-bed spot, and he caught 14 pounds in 2 hours. But then they quit again, just like in the previous area.

After the bite died he flipped hydrilla mats with a Berkley Chigger craw. He did catch a 7-pound flip-fish, but he felt the shell-bed bite was the most important.

> About his Tru-Tungsten weight, he noted: "It was a big key. I felt things so much better with that tungsten weight on the Carolina-rig. I found more shell-beds this week than I'd ever found in six or eight tournaments here before. It's a night-and-day difference between tungsten and lead."

> Main factor in his success – "The shell-beds were the big deal. I was throwing that Carolina-rig on the outside edges of hydrilla mats, and everywhere I found a shell-bed, I got bit."

> Performance edge – "The bait was a big key – that straight-tail worm was huge. I threw a lot of other baits and didn't get bit on them. That weight definitely played a big part in it, because I was able to find all those places. I'd say it was the Shaky worm more than anything though."