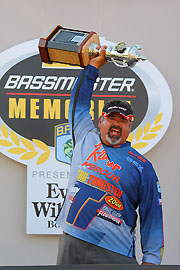 Pro bass fishing has been around for four decades now – enough time to compile all sorts of lists covering who's won this and who's accomplished that. But unless BASS changes its plans, there will never be a list of Bassmaster Memorial Major winners.

Only one angler has done it. And with the Majors set to go by the wayside after this season, it's likely that only one will ever do it.

Florida's Peter Thliveros caught 18-03 from the six-hole course on New York's Lake Onondaga today to snatch the Memorial trophy and the $250,000 check for the second straight year with a 39-00 total over the final 2 days. He won by 2 ounces over Alabama's Steve Kennedy, who incurred a 4-ounce penalty for a dead fish.

Only five majors have been contested thus far (three in 2006 and two this year), and Thliveros has won 40% of them. He'll be sorry to see them go, considering he's made more than half a million dollars off them and has cashed a check every time out in the no-entry-fee events (his worst finish is 23rd).

The veteran has been on a roll lately – this was his seventh Top-25 showing in nine events after he opened the Bassmaster Elite Series season with bombs at Amistad (95th) and the California Delta (71st). The victory was his seventh at the tour level over his 26-year career and gave him a win in each of the past 3 seasons.

Thliveros achieved a feat that's been on his objective list for awhile.

"I've always wanted to be a defending champion, and then win again," he said. "I did it at the (ESPN) Great Outdoor Games, and now I've done it here. I may not ever win a (Bassmaster) Classic or Angler of the Year, but this is something nobody can ever take away from me.

"I feels really great. It's as good as I could possibly do, is the way I look at it." 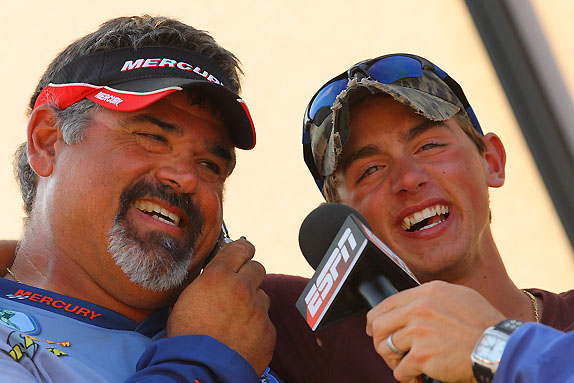 
Thliveros and son Nick share a laugh during a call home to Florida.

At Onondaga, he fished the outside edges of weedlines and grass contours in 8 to 10 feet of water with a Zoom Super Fluke. At Oneida, he focused primarily on smallmouths and caught them on a Carolina-rigged Super Fluke. He also caught some key largemouths by pitching a Zoom Super Hog into thicker weed clumps.

Kennedy ended up with nearly 19 pounds in his livewell, but his day was nonetheless filled with frustration. The dead fish – a 3 1/2-pound smallmouth – cost him the title, and he either lost or broke off several others that would've helped him.

"I'm happy with 2nd – there's nothing wrong with that," he said. "But I'm just very disappointed with my performance on the final day.

"All week I'd managed to land all but one big fish on 10-pound line, and today I broke one off on 65-pound braid. When that happens, you know it's probably not going to be your day."

He said the fish that cost him the 4-ounce penalty was alive 10 minutes before weigh-in.

"It wasn't like it was gut-hooked or anything. It was skin-hooked, and I probably just overstressed it by playing it out. I had an opportunity to release him and keep a smaller largemouth, but at the time he was alive and kicking pretty good, even though he was acting kind of strange.

"Five minutes later, he was dead." 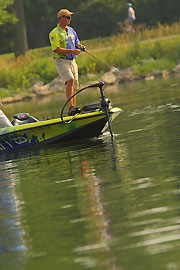 
Steve Kennedy caught a good bag today, but he endured lots of turmoil along the way.

He got on a swimbait pattern today that was effective for both species. He weighed three largemouths and two smallmouths, and a 4-08 green one garnered him his second big-bass award of the tournament.

He said he lost his best bite of the day – a largemouth of at least 5 1/2 pounds that was hanging out near a barge at the mouth of a canal. He hooked it on a jig, but it wallowed up to the surface and came off.

"I about had a fit right there. I was about as bent out of shape as I can get."

With three anglers in front of him at the start of the day, John Murray knew his chances of winning were slim. He was happy that he could catch another solid bag and gain a spot in the final standings.

"It was a great week," he said. "Today I just tried to go out and maximize my bag, and I feel I did all I could do."

Conditions were very calm this morning, and he didn't have his best action until the hint of a breeze kicked up this afternoon.

"It was like an aquarium out there at first, and that seemed to slow things down a little bit. It wasn't all that great for me until the wind picked up at about 3:00.

His bag included two smallmouths that weighed about 3 1/2 pounds each.

"I moved out a little bit when the wind started because the inside stuff had gotten pretty beat up. I caught a couple of 2-pounders, and then I got the 3 1/2s on back-to-back casts."

5th: No Complaints from Rojas

Rojas said there were no negatives surrounding his 5th-place finish.

"I fished perfectly all week, " he said. "Even at Oneida, I never lost any big fish or key fish that would've helped me.

"The last 2 days I caught everything that bit. I just came up a little bit short."

He caught more than a dozen keepers, and all of this weigh-in fish were in the 3 1/2-pound range.

"I couldn't get the big bite today. I knew that what I needed was one or two good ones, and they just never came." 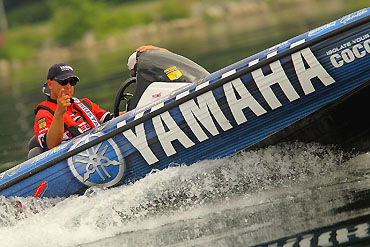 
Dean Rojas said his execution was flawless all week, but he never got a big bite today.

He flipped up a couple this morning, then endured a mid-day lull before culling a couple of times with his signature frog this afternoon.

"It was really good right around 'happy hour' (the final 80 minutes of the day when anglers can fish where they choose). I caught three of four good ones on the frog."

Lintner, whose wife will deliver their third (and he says final) child this week, wasn't too upset about dropping a place in the standings today.

"I'm pleased overall – I just had some unfortunate things happen today. But that's the way fishing is."

His day got off to a rough start when he lost a good fish at his first stop.

"I was fishing this (sunken) barge or whatever it was and I threw a jig in, and the fish ate it. I set up on it and it was a big one – the biggest I had (at Onondaga).

"I got her away from there and I could see her and I thought everything was cool, and then my line snapped. It'd gotten frayed when it went around the piling. If I had that cast to do over again, I'd do it from the other side."

He caught about 20 keepers for the day and the biggest went 4-02. He caught his fish at Onondaga on jigs and Senkos, and he also flipped mats with a Berkley PowerBait Sabertail Tube.

At Oneida, he caught smallmouth on jigs and largemouth on frogs.

"It was fun. I fished the way I like to fish the whole week, and I caught a bunch and had a good time. Now I'm ready to go home and see my family for a few days."

> Thliveros was one of the few competitors in the 51-angler field who sacrificed practice time on Oneida last week to drive around Onondaga. He couldn't fish, but he marked places that looked interesting on his GPS, and said some of them were productive over the final 2 days.

> Kennedy has won three tour-level events and been in contention in a lot of others, but he said the extra hoopla that surrounds the final day still gets to him. "There are so many more things going on," he said. "I mean, how can you practice fishing with a helicopter hovering over you?"