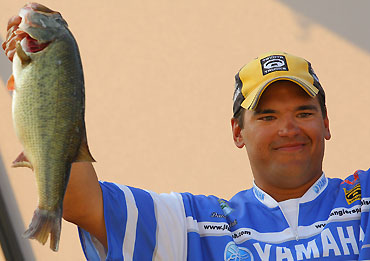 The experience of having already won a major should have a calming effect on Dave Wolak tomorrow.

Maybe the bass in Onondaga Lake are somehow aware that they're unfit to eat. That might explain why they bite just about any bait that comes their way – they're pretty sure they're not going to end up on somebody's dinner table.

The Top 12 in the Bassmaster Memorial Major caught the tar out of them today as the action shifted to the six-hole course on chemically polluted Onondaga. The biggest of 102 limits caught during the first 2 days on nearby Oneida (Steve Kennedy's 17-12 on day 1) would've been good enough for only 9th place today.

North Carolina's Dave Wolak, seeking his second major victory in five tries over the past 2 seasons, led the slugfest with a 22-00 sack. He grew up not far away and has fished extensively in the region, but today was his first day ever on Onondaga.

Defending Memorial champion Peter Thliveros of Florida is 2nd with 20-13, and Alabama's Kennedy is 3rd with 20-03. Then there's a drop of about a pound and a half down to Arizona's John Murray, who's 4th with 18-10.

California's Jared Lintner is 5th with 18-08, and day-2 leader Dean Rojas of Texas rounds out the Top 6 who'll fish tomorrow with 18-07. Rojas was the last angler to weigh in, and bumped Skeet Reese by just 2 ounces.

Here's a look at the group that will vie for the $250,000 top prize tomorrow (red numbers in parentheses indicate deficit margin from leader):

The day was primarily sunny, warm and breezy, and the field took advantage of the pleasant conditions on a relatively small impoundment (4.6 miles long and about a mile wide) in metropolitan Syracuse that served as the final stop for tons of industrial waste throughout much of the 20th century. But despite its rancid history, Onondaga supports a thriving warmwater fishery.

Most of the field reported catching at least 20 keepers despite being on the move throughout the day. Several 5-pounders came across the scales, headed by a 5-12 brute caught by Murray. Wolak caught two over 5

The winner will be determined by highest combined weight over the final 2 days.

Wolak had a simple explanation as to why he'll take a lead into the final day.

"I was fortunate to catch two fish that were over 5 pounds," he said. "A lot of us were doing pretty much the same stuff, and a lot of us caught good bags. Those two bites were the difference."

He caught fish in each hole and ended up with 15 keepers for the day. 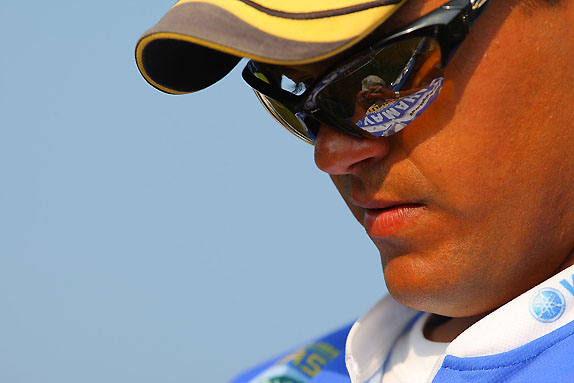 
Wolak's focus on how to catch fish will be narrower tomorrow.

"This lake is pretty phenomenal – the quality of fish is well above average. When you get bit, it's usually a solid fish."

He caught his first one on a spinning rod – a 3 1/2-pounder that he saw before he cast to it.

"Then I got dialed in on a couple of different ways to catch them, and I ran those patterns the rest of the day. I got it narrowed down to a couple of rods, and I'll just stick with those."

He won last year's American Major at Lake Wylie, so he knows how to close one of these things out.

"That might help calm me down a little bit. I'll go out and fish as hard as I can and fish to win, and my imagery will be of winning, but I know that sometimes it doesn't happen. This sport can be humbling.

"The potential is out there for somebody to get 25 pounds, so it's still anybody's ball game."

Thliveros' day got better as it went on, and he eagerly looks forward to trying to sustain his momentum tomorrow.

"I got on something early and I knew it would work, but I kept trying to make other things work, thinking I could get bigger bites," he said. "It turned out that what I'd figured out at first was the deal, and it just kept getting better and better.

"It worked in every one of the holes, and there's some places I found Wednesday (when he drove the lake during practice) that I'll be able to fish tomorrow. And I don't think anybody else is doing what I'm doing."

He was so hot at the end of the day that he culled twice during "happy hour" (the last 80 minutes during which anglers can fish wherever they want). He had about 19 pounds in his well before that, and his mindset was to avoid his best areas.

"I'm absolutely confident (about tomorrow). This is about as good an opportunity as you can have." 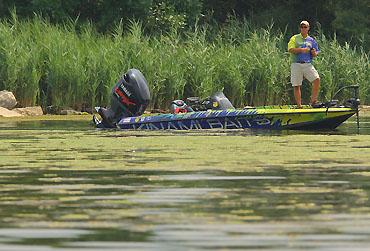 
Steve Kennedy thinks he has a shot at winning if he can catch a 5- or 6-pounder tomorrow.

Kennedy caught quality fish in every hole except the one he started in. He made a depth adjustment after that and the game was on.

"I went in there like we were still at Oneida and I was fishing dirt-shallow," he said. "I got a bite or two, but I wasn't impressed."

At his second stop he started focusing on the 4-foot range and caught about 20 keepers over the remainder of the day. His biggest was about 4 1/2 pounds and the smallest was 3-10.

He'll fish the same way tomorrow and hope for some even bigger bites.

"I'm confident I can catch 17 pounds worth. Above that, it may not happen.

"I'm probably going to need a big one to get over the hump, like a 5- or 6-pounder. I'll do pretty much the same thing – I don't see a reason to change anything, other than I might have a big jig rod out."

He weighed all largemouths and boated just one smallmouth over the course of the day.

"It was in the 2 1/2-pound class, but it was long and skinny. It didn't look like something I'd want to target."

Murray's 5-12 held up as big bass of the day, but he lost one early that might've been even bigger.

"It was on my first cast, and it was at least a 5-pounder and maybe a 6," he said. "I threw the same jig I was using at Oneida, which was a light-wire Yamamoto jig.

"That fish bent the hook out a little bit and came off. After that I had to go to a little big bigger tackle."

He went through about 20 keepers, including three smallmouths. With a deficit of nearly 3 1/2 pounds, he knows he can't lose any big bites tomorrow and still have a shot at winning.

"I might have a chance with 22 or 23 pounds, and I had that on today. In this place, you never know what you're going to catch.

Lintner had a pretty good day considering that it was his first experience with a hole-course format.

"It was kind of weird, and I still don't have a real good grasp of what's going on," he said. "I found myself fishing way too fast – just burning down the bank trying to get something going.

"Then I'd see a grassline and I'd force myself to slow down and fish it, and that's when I'd get some bites."

He had a lot of rods on his deck today, but will probably stick to flipping and throwing a jig and a topwater plug tomorrow. As the survivor who ranks highest (3rd) in the Angler of the Year (AOY) race, he had first pick of the starting holes for tomorrow, and selected No. 2.

"I don't think I kept a fish from there today, but toward the end of the period I ran into a (sunken) barge and proceeded to catch nine fish in a row. There was just a giant school cruising around in there.

"If I can get a decent limit in the boat out of there, that would help relax me for the rest of the day."

6th: Rojas Knows What he Needs

Rojas' bag included a fish that topped 5 pounds, and he expects to bring in more than one of those tomorrow.

"I have a plan," he said. "I'll do a lot of the same things I did today, and maybe add a couple more things. 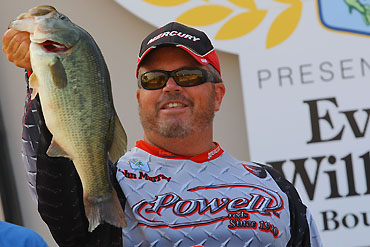 
John Murray's 5-12 took big-bass honors, but he lost one that might've been bigger.

"I know now what I need to shoot for, and I'm going to go out and hammer them."

He thinks he still has a reasonable shot at winning.

"All I need to do is find the right school. If I can whack a couple of 5-pounders, then I'm back in the ball game again.

"The fishing's so good here, and there's big ones in there. It's still wide open."

Crews doesn't know why he struggled so badly.

It wasn't due to a lack of effort.

"I did all kinds of things – deep cranking is about the only thing I didn't try. I dropshotted, I threw a tube, I flipped with quarter-ounce weights, half-ounce weights and 1-ounce weights.

"I threw a Senko around. I tried topwaters, frogs, toads, you name it. Sometimes you wake up on the wrong side of the bed, and I think that's what happened to me today."

His wife is due to deliver their first child in a few weeks, and he looks forward to getting home to Virginia after spending most of July in New York.

"She's ready for me to be home, and I'm ready to get back there and start helping her out."

> Fishing in Onondaga was banned from 1970 until 1986. The New York State Dept. of Environmental Conservation recommends anglers eat no walleye from the lake, and no more than one meal per month of all other species.

> Lintner's wife was due to deliver a baby on Thursday, but he talked to her after weigh-in and she plans to hold out until he gets home. He'll try to arrange a flight out of Syracuse either tomorrow evening or early Monday morning. Then he'll have to fly back east the following weekend to practice for the Potomac River Bassmaster Elite Series.

Here's the forecast for the final day of the tournament: