BACK
Long Moves Up To 2nd 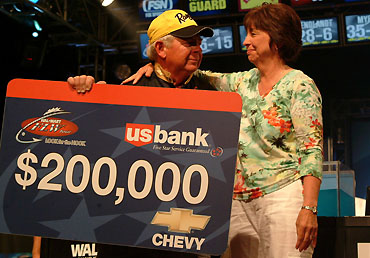 Steve Clapper is congratulated by wife Linda after winning his FLW Tour debut.

Day 4 at the Detroit River FLW Tour got off to a shaky start for Steve Clapper. But it ended the same way the previous 3 had – with him in the lead.

The 59-year-old Lake Erie master from Ohio caught a 22-06 bag to close out a wire-to-wire victory in his tour-level debut. His 45-09 total over the final 2 days gave him a margin of victory of better than 6 pounds.

Most predicted that the Tour's final regular-season event of 2007 would be won on Erie, and that proved correct. But the two anglers who finished right behind Clapper both spent all 4 days on Lake St. Clair.

Two Indiana residents – jackpotter Thomas Moleski and Tour regular Shad Schenck – rounded out the Top 5. Moleski, who was among the Top 5 after each day's weigh-in, caught 19-12 today for a 4th-place, 39-01 total. Schenck tied Clapper for the biggest sack of the day and moved up two places to 5th with 38-07.

Here's how the rest of the Top 10 finished up:

The 25-mph winds that hammered the area on day 3 were gone today, which allowed everybody to fish their best stuff. That made it even easier for Clapper to sew things up, and he more than doubled his advantage from the previous day.

The Top-10 finishes by Long, Schenck and Pirch propelled them into the 40s in the final Angler of the Year (AOY) standings and should garner them Forrest Wood Cup berths due to double-qualifiers among the Top 40. Oregon's Jay Yelas clinched the AOY on day 2 with his 25th-place finish.

Clapper Pulled it Together

Clapper has won numerous events on the Detroit, including five BFLs and last year's Canadian Open. But none were anywhere near as lucrative or prestigious as this.

Because of the way his early morning unfolded, he thought he might be in trouble. The FLW Outdoors-supplied boat he was assigned to wouldn't accept his GPS waypoints, but the problem was just a blown fuse.

Also, his hat camera didn't function properly to begin with, but that issue was also rectified quickly.

"It about sent me into a panic mode. I was thinking, Man, this just isn't going to happen."

Once he got out on the water, though, everything went smoothly. He had four fish by 8:30, then completed his limit awhile later.

He fished a dropshot rig and a tube throughout the tournament. His last four weigh-in fish today were enticed by the tube.

"I just fished the same deal I'd been fishing – I didn't change much at all. I was surprised by how much weight I ended up with."

His bag included two fish that were over 5 pounds each.

"They didn't seem that big when I was catching them, but when I was taking them out of the livewell, I said, 'Doggone, these are bigger than I thought.''' 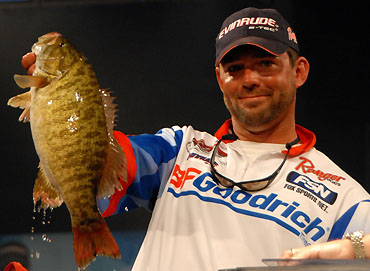 
Kevin Long made some serious money by moving up three places to 2nd today.

Long was a bit stunned that he gained three places today with his 20-10 stringer.

"I knew I had a real nice bag for St. Clair, but generally you can't win there," he said. "With the way I caught them, I was sure the guys on Erie would have really hammered them.

"This is just a great feeling. My whole goal today was to go out and try to catch 22 or 23 pounds to give myself a shot."

He said he caught between 30 and 40 keepers for the day.

"I got on one primary deal where I caught a big one, and there were about 15 other big fish following it. That's where most of my weight came from.

"I started out doing a little drifting, but I wanted to cover some more water, and I eventually found what they were holding on."

3rd: No Biggies for Baksay

Baksay lost one place in the standings today, but he couldn't fault his performance.

"I didn't think I could catch Steve – none of us did. And I'm very good friends with (Long), so I'm also happy for him."

He caught a bunch of fish today, but only one topped the 4-pound mark. That one weighed 4-01. 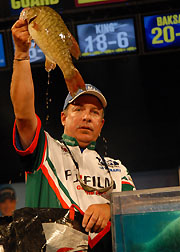 
Terry Baksay caught a lot of fish today, but only one reached the 4-pound mark.

"I can't tell you how many I caught that were 3-07, 3-08. I caught fish on a tube, a jerkbait and dropshotting, and the bite was all day long. It never stopped."

Like Clapper, Moleski was competing in his initial Tour event.

"I'm pretty happy," he said. "It was a rather respectable debut, I'd say."

He opted not to hit some of his best big-fish areas today.

"I have a couple of spots that have traditionally yielded some giant fish for me, but I had some boats chasing me around – both officials and spectators. There isn't much chance of catching Steve Clapper when he has a 4-pound lead, so I decided not to give up some of my best stuff.

"I decided to save them for some other tournaments and just take what I could get today."

He caught more than 20 keepers, and his bag was headed by a 4-pounder.

"These fish tend to school up by size. and today I had a few infiltrate my humps that were a little smaller. I had a batch of 3 1/4-pounders that didn't do much except chew on my fingers when I took them off the hook, but I managed to get a few that were pretty close to 4 (pounds) out of them."

Schenck was pleased with his big bag today and his advancement into the Top 5, but he wishes he'd stayed a little longer on a roiling Erie on day 3.

"It feels real good," he said. "I had a great tournament – I came in with a good plan, and I executed it. 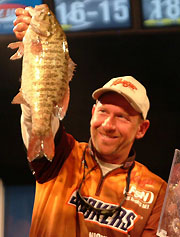 
Thomas Moleski avoided some big-fish spots today in order to save them for other tournaments.

"But if I had it to do over again, I'd have made a couple more drifts yesterday and culled out one fish, and that would've given me 2nd place. But my co-angler was sick, my camera guy was sick and I was getting sick, so I figured we'd better get out while we could."

He said he caught 23 fish from two different areas today, and all of them were over 3 pounds.

"I went and did the same thing I've been doing, but today I could go sit on my spots and make consecutive casts and catch them."

> Long ended up 41st in the AOY race. Pirch was 43rd and Schenck 45th. Baksay climbed to 54th, but his Cup berth was cinched via last year's FLW Series.

> Michigan's Trevor Jancasz (6th) actually caught 18-15 today, but was docked 8 ounces for a dead fish. The penalty didn't cost him any ground in the standings.