Clapper Overcomes The Elements To Catch 23-03 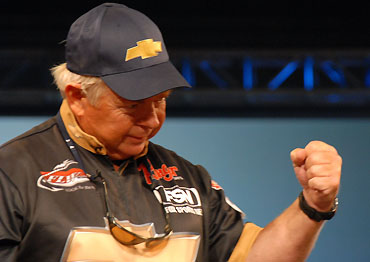 Lake Erie ace Steve Clapper is just a day away from winning his FLW Tour debut.

Steve Clapper is just 1 day away from a wire-to-wire victory in his first-ever FLW Tour event.

The Lake Erie stalwart from Ohio caught a 23-03 bag today – the best of the tournament – to forge an advantage of nearly 3 pounds on day 3 at the Detroit River. Conditions were as nasty as expected – a steady 25 mph wind that gusted to 30 at times created 7-foot rollers on Erie – and Clapper got beaten up as badly as anybody who ventured out there.

But he came back with a sack that'll make him real difficult to beat tomorrow.

Connecticut's Terry Baksay, who caught the only other 20-pound bag today, is his closest pursuer. He brought in 20-05 and trails by 2-14.

Two other Tour first-timers occupy the 3rd and 4th positions. Michigan's Trevor Jancasz, a force on the co-angler side who switched to the front of the boat for this event, caught 19-06 and Indiana's Thomas Moleski, another Erie expert, boated 19-05.

Here's the bottom half of the Top 10:

For those who went to Erie today, it was imperative to allow enough time for a slow ride back to the launch in Detroit. Clapper allotted 3 hours, though it only took him 2.

Ohio's Christopher King, the fourth Top-10 member fishing his initial Tour event, had to be trailered back from the Canadian side of Erie due to the rough conditions. He missed the weigh-in and took a zero for the day.

Baksay and Long continued to catch strong bags from St. Clair, but they'll likely need multiple 5-pound bites there tomorrow to have a chance of catching the leader. A 25-pound stringer is more likely to come from Erie, and Jankasz thinks he can catch it if conditions are right.

But they'll all need at least the hint of a stumble from Clapper, and thus far he's shown no sign that he'll give it to them.

Clapper paid a price to catch his huge sack, and the toll was purely physical.

"I've seen it worse, but it was plenty tough out there," he said. "I'm so sore I can hardly move. My whole body's sore, but it's mostly in my legs."

He'd been alternating between a dropshot rig and a tube throughout the tournament, but the tube was predominant today. He fished the ISG goby-colored model on a 3/4-ounce Bite-Me Big Dude jighead.

"It's easier to fish than the dropshot in the wind, and the fish seemed to want the bait more on the bottom today."

He caught about 10 keepers, and the biggest was a 5 3/4-pounder. He had a limit in the livewell in just over an hour.

There's a chance his primary area won't be as productive tomorrow, despite the expected calmer conditions.

The five-time Detroit River BFL winner said he'll likely be a little nervous tomorrow with $200,000 on the line.

"I'm sure I'll be a little jittery until I catch that first one, but I'm just going to go out and go fishing." 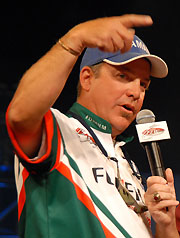 2nd: Baksay Mixes it Up

Baksay needed to make only five passes over his St. Clair fish to put together his second straight 20-pound bag. He did it with three different baits – a dropshot rig, a tube and a jerkbait.

"I'm using a couple of baits that my son (16-year-old Christopher) was throwing in practice – the colors he thought were good," he said. "They seem to be working."

He caught his two jerkbait fish when the sun emerged from behind some clouds for about 10 minutes. Both were 4-pounders.

"They came on back-to-back casts. It was like, 'Thank you, God.'

"Then the sun went away and I threw it for another half-hour, and never got another tap."

He said all of his weigh-in fish were almost exactly the same size – 3-15 to 4-02. He knows he'll need some bigger ones tomorrow to make a run at Clapper.

"My son and I had seven over 5 in practice, and I'll need to catch five of those in 1 day. Do I think it's possible? Sure.

"If it's calm, maybe the Erie fish won't bite. I'm not saying that mine will bite, but we did awfully good in practice when it was calm."

He said he'd rank this fishery the best in the world right now.

"I'm very partial to Champlain and Lake Winnipesaukee in New Hampshire. But there are more fish here, and they seem to be bigger."

Jancasz is a little more than 4 pounds out of the lead, but he plans to give Clapper a run for the big money tomorrow.

"In practice, I thought if I got the exact right conditions and landed everything, I could catch 25 pounds," he said. "That could happen tomorrow.

"(Clapper) only has to slip up a little and someone else could slide right in there. I'll go out and give it my best shot and see what happens."

He fished the same stuff today as the first 2 days, but had to use his big motor to reposition himself after each cast.

"It (stunk) trying to hold myself up there with that short-shafted trolling motor (on the FLW Outdoors-supplied Top 10 boat)," he said. "So I'd just use the engine to get up on the waypoint, make a quick cast, and catch one. Then I'd go back and do it again."

He ended up catching about eight keepers, including a 4 3/4-pounder. He had all his weight by 9:15. 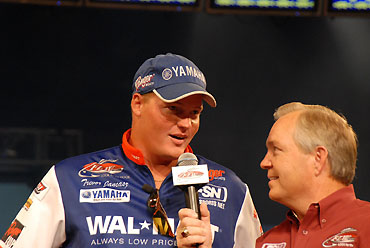 
Trevor Jancasz thinks he can make a run at the victory if things go right for him tomorrow.

"It took an hour to get there, and then a little over 2 hours to get back," he said. "And we got really, really wet."

"If (the wind) lays down like it's supposed to, it'll be good times for sure. It'll fit me absolutely perfectly, and I won't have a co-angler back there sharing the weight.

"If things go right, I'm going to smash them."

The wind was blowing Long off of his primary spot on St. Clair, so he transferred to another location about 10 miles away and had an excellent day.

"For awhile this morning I could still hold on my spot and everything was cool, but we started spearing waves and my (bilge pumps) weren't working," he said. "I caught a couple, but I decided I had to move.

"I went to a whole new stretch that was more out of the wind, and I caught a 4-pounder right away and culled several times. It was a good call."

He ended up with nearly a dozen keepers, including a 4 1/2-pounder. But realistically, he doesn't think he stands much chance of winning tomorrow.

"Not unless Clapper's motor blows up or something. I'll go out and catch everything I can catch, but he's just smoking them and it's going to be tough to make up that ground.

"To catch 24 or 25 pounds doing what I'm doing, that would be something special."

Cliff Pirch of Arizona is competing at the Detroit for the first time, and the rugged conditions today caused him to depart Erie earlier than he should have. He weighed a four-fish bag for 13-11 and is in 9th place.

"I was a little apprehensive because it was blowing so hard and those waves were getting big," he said. "I don't have the experience here, so I didn't know for sure what I was supposed to do or not supposed to do.

"I started thinking that maybe I was just too stupid and maybe I shouldn't be out here any longer. I should have stayed and gotten two more fish. I'll learn from it."

He had three in his well when he left Erie at 10:45. He thought he could fill out his limit on the river, but only managed one more.

"I had another one come off – it was the first fish I've lost all week. But I'll go out and catch a big stringer tomorrow and try to make up as much of it as I can."

The inability to move around was his biggest hurdle on Erie today.

"If (the fish) aren't on a certain spot, you can usually move around and find them. But today you were kind of constricted by the waves."

> Clapper said this was not a day for recreational fishing on Erie. "I ended up having fun, but that would've been hard to do if I hadn't been fishing for this kind of money. I saw some 7-foot waves, and there were a lot of steady 5s."

> Baksay caught a 30-pound musky – his sixth on this trip that was in excess of 40 inches. "If anybody wants to go musky fishing, I'd recommend Lake St. Clair. People fish their whole lives trying to catch what I've caught this week."

Here's the forecast for the final day of the tournament.