Yelas On His Title, His Year, And How He's Changed 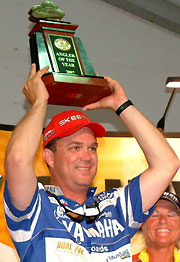 He nearly lost it yesterday, when he floundered with 15-12 and ended day 1 in 46th. That left the door wide-open for Shinichi Fukae, but Yelas caught what he needed to today (18-04) and locked up the title.

Yelas won his first FLW AOY title in 2002 – the same year he won the Bassmaster Classic. He then won BASS AOY the following year. For reference, here's a look at his finishes this year.

In the Q&A that follows, Yelas talks about the title, his day today, and how he's changed as a fisherman since his first AOY title in 2002.

BassFan: This is your third AOY title in six seasons. How do you feel?

I feel great. It's a major title in the sport, and you never get tired of winning those. The caliber of fishermen you're competing against gets better and better every year. So it's kind of neat to know you're not over the hill.

But really, by historical standards, my career should be peaking right now. When you look at most pros, they peak in their early 40s – at least in my research. I'm 41, and hopefully I have some more good times to come.

You made it pretty close. Was there a point today when you thought you'd maybe lost the title?

I just barely won it. I was one bite away from not winning it. So I'm very thankful. It must have been God's will for me to win. I caught a 5 1/4-pounder today, and without that big smallie, I wouldn't have won.

I think a close finish like that makes you more appreciative that you did get the breaks and win. I've won three AOYs, and all of them have been real close. And I've never wound up on the short end of an AOY race. Whenever I've been in the hunt, I've won.

I'm just so thankful to God that I had those opportunities and they've gone my way. A lot of guys have been close and never won. I don't have any explanation for it, but when you're one bite away from winning or losing, it's "Praise The Lord" when you get the bite. It's a pretty neat experience.

Talk for a minute about your big fish today – was it a late bite?

That big fish was my first bite this morning. I knew when I caught it that I was on my way. I told my partner, "Four more good ones and I'll be there."

So your moment of uncertainty was when you came off the water?

It was a trailered weigh-in, and the biggest suspense was when I put my boat on the trailer. When I checked in, I thought I'd lost the title. I thought I had 14 or 15 pounds. I was shocked that my fish weighed that much. I have a bad tendency to underestimate weights of fish.

I'd lost the title yesterday, and Shin had it, but I snatched it back today, thanks to a good day of fishing.

And here's another story. This is the first time this has happened to me in my career. Today, my partner gets a bite, sets the hook and breaks his line. He's digging through his tacklebox for another tube, and I throw out, set the hook, and catch a 4-pound smallie. In the fish's mouth was my partner's tube and 4 feet of line.

Did you weigh the tube in the bass?

It was so far down in the fish's mouth I couldn't take it out without killing him. So I weighed the tube, yeah.

You find that a lot of pros sometimes just have unusual things like that go their way. That's what you call getting a break, and I got a major break today. Things just went my way. 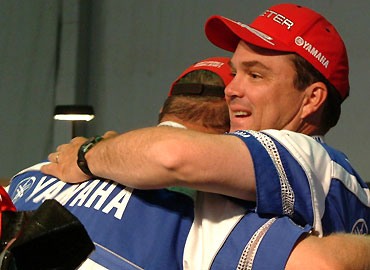 
Yelas said he's changed considerably as an angler, and he caught most of his fish this year on a dropshot and swimbait.

Of course, you didn't win AOY today, you just clinched it. You won it by virtue of your finishes this season. When you look back, what made the biggest difference in your fishing this year?

This season, I was trying to stay on the cutting edge of lures and techniques – trying to gain an edge on my competition. I've come to realize, after doing this for 20 years, that you can't use the same tacklebox for a 20- or 30-year career. Your tacklebox must change over time. Not totally, but you have to learn to incorporate new things.

I caught a lot of my fish this season on swimbaits, and also on Berkley Gulp. I caught my big one today dropshotting a Gulp goby.

The first tournament of the year, at Travis, I caught all my fish dropshotting Berkley Powerbait and Gulp worms. In a nutshell, Berkley Gulp's a very innovative, cutting-edge product, and I found it made a big difference for me this year, along with the swimbait. And here at Detroit, half my fish were on the dropshot, and half were on the swimbait.

That's why I had to move back out west – to learn more about the swimbait and dropshot (laughs). There's too much West Coast blood in me. That stuff works in the East too.

You're fishing the Western FLW Series this year. Did those events sort of get you moving toward your current technique focus?

You have to pay attention to what's going on in California, because a lot of the best techniques start out west. By fishing the Western Series tournaments, I learned a bunch about swimbaits and dropshots, and I was able to apply that stuff back east.

Among your many career achievements, where does this one rank?

It ranks right up there with all of them. I think the first time you win an AOY, that's the biggest thrill. But to me, this is a huge accomplishment – to get back to the top of the sport.

As I said, I'm a totally different fisherman, technique-wise, than when I won in '02 and '03. Those were all jig and spinnerbait fish mostly. This year, I couldn't get any bites on a spinnerbait, although I did catch most of my fish at the Potomac on a jig.

I think there's a lesson there for BassFans. As time goes by, you need to incorporate all this new stuff into your fishing. I'd never fished a dropshot much before this spring, and I never really embraced the swimbait like I did this year.

In 2002, when you won FLW AOY, you won the Bassmaster Classic a short while later. Does this title mean another championship win's coming next month?

It happened before, so that gives you confidence it can happen again. There's a lot to be said for that. With a championship coming up, it's a good time of year to get hot.

> Yelas declined to name the swimbaits he used this year, since he pays full retail price for them without a sponsorship arrangement. He did say he threw "several different brands" though. 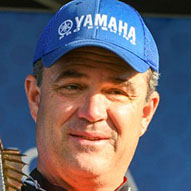