BACK
Is He Human? 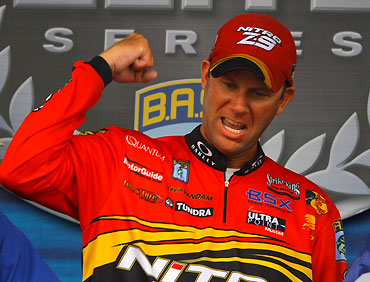 VanDam said he's tired, but it's all good.

BassFans who read Kevin VanDam's comments last night didn't need a crystal ball. The world's most dangerous angler stumbled yesterday with a 16-pound bag at the Grand Lake Bassmaster Elite Series in Oklahoma, and as all BassFans know, he seldom has 2 bad days in a row.

So he put on the mad mask, attacked Grand Lake today,

That's because day-3 leader Jeff Kriet mustered only 14-08 – his lightest weight by far of the 4 days, and 4 pounds less than he needed to surpass VanDam.

When it was over, VanDam contacted Weyerhaeuser paper from the weigh-in stand. His resume just keeps getting longer.

The two-time Bassmaster Classic champion and three-time BASS Angler of the Year won his second event of the season – a rare accomplishment at this level.

With the $100,000-plus in prize money, he's moved further ahead of 2nd-place Denny Brauer on the BASS all-time money list.

He also moved into the lead in the Bassmaster Angler of the Year race.

And it's likely (nearly certain) that he'll retain the title of No. 1 ranked angler in the world in the BassFan World Rankings presented by Tru-Tungsten.

Kriet rocketed into the lead yesterday with his 24-11 – the heaviest weight of the event – but couldn't hang on today in the ever-shifting battle of schooling bites. "I don't feel like I did anything wrong execution-wise." he said. "It was a great week. My day's going to come soon. I'm going to win one of these events soon. Mark my words."

Rookie Marty Robinson, who began the day in 3rd, caught 10-15 and fell to finish 7th.

Kevin Short weighed 16-09 today and finished where he started the day – in 4th.

Hite sacked 17-08 and finished where he started the day.

VanDam's previous win this year was at Guntersville. He won that event with the exact same bait he used this week.

"I'm tired, but it's good," he said shortly after weigh-in. "Wins are hard to come by." 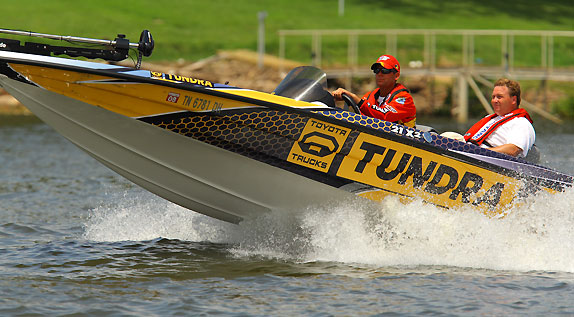 
VanDam fished his trademark run-and-gun style and caught all his fish on two crankbaits – a Strike King Series 5 and Series 6 – both in his new sexy shad color.

He noted that to win twice this year feels a little special, because he let a few opportunities slip by last year. "I just couldn't get over the hump (last year). These guys are so good, it's hard to win."

"It was a great week – a great shootout," he added. "(Kriet's) a great competitor. And he's a great friend of mine."

He threw two crankbaits all week – a Strike King Series 5 and Series 6. Especially notable was the color – sexy shad. It's one he designed, and it should be available soon.

"I caught every single fish I weighed in the tournament on those two baits," he said. "It's a color I developed for Strike King and they're going to be introducing it. It's the same one I won Guntersville with."

He added: "Shad vary from region to region, and to me, it's important to match the hatch. We're doing it." (Meaning, Strike King will release regional color variations of shad like sexy shad). 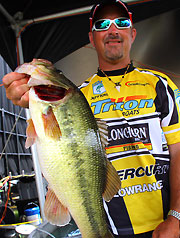 
Jeff Kriet, who has yet to win a tour-level event, said: "My day's going to come soon."

The full details of his winning pattern, and pattern information for the other top finishers, will be posted soon.

"I feel good about today – I had a good comeback today – but I feel real disappointed because I had the opportunity to win," he said. "If I'd had any kind of decent day yesterday, I would have only needed 18 pounds to win."

About yesterday, he said he lost four fish on four consecutive casts – "all good ones. It was just a run of bad luck. I just didn't get them in the boat. But that's fishing."

Short weighed a 20-plus sack yesterday, but he never really hovered in that 19-pound range it took to win. Alongside his 20, he weighed 17s on average.

"I have kind of mixed emotions," he said of his finish. "I'm pretty happy considering where I finished last year (99th), so I feel like I'm getting a little better. 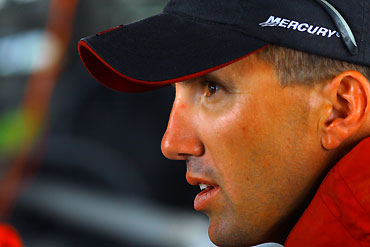 
Edwin Evers feels good about his comeback, but he's disappointed about his four-fish fumble yesterday.

"And overall, any time you make the Top 12 in this crowd, you have to feel good. But to get that close to actually winning the thing, but not being able to get it done – it's a little disappointing."

About today, he said he was never really in the right place at the right time. He also noted that he didn't really get on the crankbait bite until the second day. He eventually used it to supplement his bags, but continued to flip more than others in the Top 5, even late in the day.

He's currently 27th in the AOY race – which means this is his best season by far.

"Out of 4 years, this is the first year I've ever really been concerned with points, and trying to make sure that every day I get a decent limit," he said. "I've played small-ball. Obviously, it's doing a little bit better job."

Before the last half-hour of day 1, Jordon had no love for Grand. He missed a check here last year, and was sitting on about 7 pounds. But then he picked up a crank, caught two good fish and cranked the rest of the week.

He caught two 20-pound-plus limits en route to his 5th-place finish. What haunts him, though, is what might have been.

"I just made my adjustment too late. I was way too hard-headed. I stayed with the jig (on day 1). I couldn't get those suckers to go on a jig or Carolina-rig, and I pulled out the crank in the last 20 minutes. I knew then that I'd missed the boat."

About his finish, he said: "I'm tickled to death about it after that dismal first day. Catching 20-pound bags deep-cranking is just awesome. It's a lot of fun.

"And another cool thing was that I sold my boat to some guys up here 3 years ago. They were following me every day, and cheering me on. They were Butch, and his two boys Tyler and Blake. It was awesome. It was killer."

Matt Reed's fished Grand twice in his life. Each time, he made the Top 10 (last year he finished 2nd).

About his finish, he said: "It's a good finish. Anytime you get in the Top 12, you've had a good tournament. I caught a whole lot of fish – I just didn't get enough of the really big bites to get all the way to the top.

"But I had a ball. I caught at least 20 3-pounders today, and only weighed 16 pounds. They were all the same-type fish, and it was really fun."

He caught fish on several baits this week, and noted that each day they seemed to prefer one more than the others, so he had to "lock on to what it was each day." His selection included a Carolina-rigged Yum Wooly Hawg Tail creature, an XCalibur Fat Free Shad crankbait, a shakey-head, and a football jig.

He didn't credit any one thing with his repeated Grand success, but did note: "I do kind of like this place. It fishes the way I like to."

He also needed this finish, bad. Before the event began, he was 68th in the Elite Series points and well out of Bassmaster Classic qualification. But he picked up 260 points today, which puts him 54th, so he's moving up.

"This kind of got me back to where I can see the horizon," he said. "I've just had a mediocre season so far, and I just hope to get back on the right track. I've had good finishes in two of the last three tournaments (he finished 13th at the Memorial Major), so hopefully the wheels are tightened up a little bit, I can keep the tires on, and get back on track.

"I'm looking forward to the northern swing. I enjoyed it up there last year."

> VanDam said this was his first win in Oklahoma.