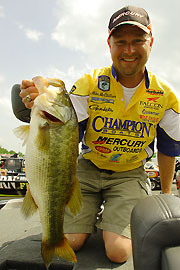 If there's one factor that hurts a deep bite more than any other, it's mud. Limited water clarity shrinks the strike zone to a point where you pretty much have to hit a fish on the head to catch it.

So it's no surprise that, in the wake of flood waters, Bassmaster Elite Series pros had to chuck pretty much everything they knew about Oklahoma's Grand Lake. Tomorrow's competition here marks the 7th stop of the Elite Series tour, and high water has largely blown out the lake.

Last week, heavy rains in southeast Kansas and southwestern Missouri filled Grand well above full pool. But the Grand River Dam Authority kept as many as 21 flood gates open, and the water level has been steadily falling. As of noon today, water elevation was 746.42 feet.

Normal elevation for this time of year is 744, so the lake's still within the bounds of flood pool.

What that means for anglers is that a lot of debris is floating in the lake, which can make long runs more time-consuming. It also means the water's muddier than normal. One plus, though, is there's been water in the bushes.

Muddy water? Bushes? Sounds like a flipper's paradise. It might have been on Monday, when practice began, but the lake's fallen at least 3 feet since then, so the fish are moving in reaction to the falling water, and the bush-bite now isn't nearly what it was a few days ago.

And the deep bite's nothing like what it was last year, when Mike McClelland won with 79 1/2 pounds for 4 days (or about 20 pounds average per day). That said, many feel the gradual clearing will accelerate and the event will be won out deep again.

The trouble there is it would probably take a mid-tournament switch to cash in on that bite, since the deep bite in practice was largely a bust.

The happy medium seems to be the first breakline off the shore. That's where pros have connected with Carolina-rigs, cranks, and spinnerbaits. But overall, few have reported any significant concentrations of fish.

And the dock bite will be somewhat of a factor, but few believe the event will be won on such cover.

It seems the falling water has changed fish activity and location on a daily basis, which should make this event a great one from a fan's perspective.

Before getting into more specifics about practice, here's more about the lake itself.

> Lake name: Grand Lake O' the Cherokees (Grand)
> Type of water: Lowland impoundment
> Surface acres: 59,200 at full pool
> Primary structure/cover: Willow trees (bushes), flats, points, ledges, some laydowns, tons of docks and brushpiles
> Primary forage: Gizzard and threadfin shad, crawfish, bluegill, crappie
> Average depth: 35 feet
> Species: Largemouths, smallmouths and spotted bass
> Minimum length: 14 inches
> Reputation: A super lake for numbers with potential for 20-pound-plus bags, but big bites can be hard to pattern
> Weather: A passing front will give way to stable conditions with partly cloudy skies, highs in the low-90s and moderate winds
> Water Temp: high-70s to low-80s
> Water visibility/color: 6 to 8 inches, but clearer near the dam and in some creeks (like Elk)
> Water level: 2 1/2 feet high but falling
> Fish in: 0 to 25 feet
> Fish phase: Summer
> Primary patterns: Flipping bushes and docks, cranks, jigs, Carolina-rigs, spinnerbaits, finesse jigs and worms if the water clears
> Winning weight: 73 pounds
> Cut weight (Top 50 after 2 days): 21 to 22 pounds
> Check weight: 21 to 22 pounds (Top 50)
> Fishing quality (1=poor, 5=great): 2 for Grand
> Biggest factor: Will the water clear in time for a deep bite to dominate?
> Biggest decision: Shallow or deep? Also, whether to fight the clearer-water crowds near the dam, or try to get away
> Wildcard: The flipping bite – could be a hero or zero deal

What follows are practice notes from several pros in the field.

"Up until yesterday, they had 11 floodgates open and were running all the generators to get the lake down. I'd say it dropped 3 1/2 or 4 feet in the last 5 or 6 days. Over the last 36 hours, they shut the gates and it's stabilized at about 3 feet higher than last year.

"Clarity's probably the biggest factor hurting the offshore bite. It's tough. There's a lot of fish to be caught shallow, but the dingy water's definitely hurting the deep bite right now. That doesn't play into my favor, but it is going to open the door for some other ways to catch them.

"I still think the opportunity's there to catch 18 or 20 pounds a day, but I don't think it's going to happen like it did for as many people as last year – at least not consistently every day. The winning weight will be down a little from where it was last year."

> VanDam finished 22nd here last year. He's currently ranked No. 1 in the world, and is 2nd in the Elite Series points. 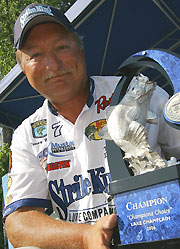 
Denny Brauer had a flipping bite going, but clouds and falling water could mean it's going away.

"For me, it's a lot different than it was last year. I'm having a hard time with it. The fish seem to be moving. They've been dropping the lake, and that's never a good thing. Dirty water's usually good, but I think this time it would be better if it was clearer.

"I think if it was clearer, the fish could find your baits a little easier. Last year it was not a power-bait tournament – it was jigs and Carolina-rigs and things like that. I don't have a lot of confidence throwing those when the water's dirty.

"The water's clean down by the dam, but there's also a ton of pressure down there. It's going to be interesting.

"I've caught some shallow, but to me, it's been real inconsistent – a lot of small fish, and not many big ones. But I'm sure it's just like any other lake where certain little stretches of willows and bushes with a little deeper water on them will hold more fish. It just all looks the same to an outsider like myself."

> Scroggins finished 39th here last year. He's ranked 22nd in the world, and is 7th in the Elite Series points.

"I've been in the bushes, and I've been fishing out. I've been doing a little bit of everything that's going on, but I'm not real strong in any one suit. I think you can really catch them three or four different ways.

"I'm probably going to flip bushes for the most part because the water in the main lake's kind of muddy, but it clears up in the creeks a little bit. It doesn't bother me when it's muddy in the bushes, but when I'm offshore, I want some clarity.

"I think the majority of guys will be flipping bushes."

"It's been hit and miss for me. They're dropping the water, and that definitely didn't help the bush bite any. They took 5 feet out in a couple of days, and that was not a good thing.

"I would have had a good flipping bite but they dropped the water so fast on me. There'll be some fish caught that way, but I don't think it'll be won that way."

"Practice has not been real good. It's the first time I've been to this lake, and it's tougher than I expected it to be. I'll just go fishing. That's all I can ever do.

"I don't feel overly confident. You never can tell, but it's just been a struggle.

"Anything stable with the water would have been easier. I wouldn't be guessing constantly what they're going to do next. I haven't caught any big ones, and I never caught them grouped up. Even outside, it's always just been a bite.

"I'll just cover a lot of water and hope for the best." 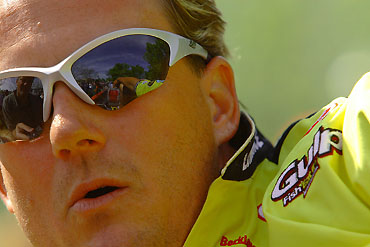 
Skeet Reese's grip on the Angler of the Year race might hinge on this event.

Here's BassFan's recommendation on the Top 10 to watch at this event. In no particular order they are:

1. Mike McClelland – He makes the list not just because he won here last year, but because he's a perennial big stick at Grand. While the practice conditions did level the playing field, he might have clearer water by late Friday or Saturday, so if he can hang around, he could close with a deep-water bite on his personal-favorite brushpiles.

2. Tommy Biffle – Makes the list because he's one of the all-time great flippers. He's probably fully committed to shallow water, and if that bite's happening, he'll be right on top of it.

3. Kevin VanDam – He's the No. 1 angler in the world, and he's hunting the Angler of the Year (AOY) title. He comes off an uncharacteristic 39th at Smith Mt., but rarely messes up twice in a row. What makes him stick out is his planning. He's probably banking on a big change at about the mid-tournament point, at which time he'll strike.

4. Skeet Reese – Grand was his bomb last year – he finished 70th – so the changing conditions likely favor him. He noted there could be a low-point coming anytime the rest of the season. Could this be it? Probably not.

5. Takahiro Omori – Tak's back in Classic-qualifying position after a 3rd at Smith Mt. What makes Tak stand out this week is the potential for an explosive crankbait bite. He moved away from power-fishing at Smith Mt., but he'll be back with the power-stick this week.

6. John Murray – He's one of the few who was stoked about practice and seems to have something going. Murray's a strong summer stick – benefits of his desert roots – and water changes don't phase him. And if it clears, he's wicked out deep too.

7. Ken Cook – He's an Oklahoman and finished 8th here last year. At 61st in the points, he desperately needs to get going. Any rally has to start here. 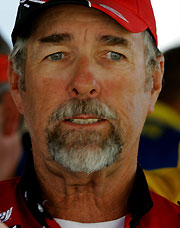 
Ken Cook's one to watch – he finished 8th here last year and needs to find a new gear soon.

8. Marty Stone – Seems strange to call him a darkhorse pick, but there you go. Stone's basically fallen off the map. We think he'll start moving in the right direction this week.

10. Stephen Browning – He's quietly perched at 14th in the points. Yes, his 66th-place world rank illustrates his inconsistency, but he's due for a breakout event. Call it a feeling.

Here's the forecast for the tournament days.