BACK
Dudley A Pound Back

Baumgardner Moves To Front With 16-07 Bag 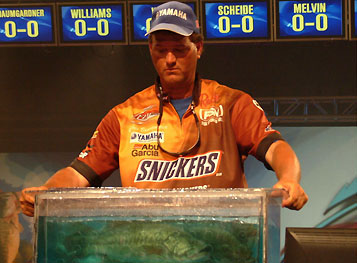 Chris Baumgardner will take the lead into the final day of an FLW Tour event for the second time in his career.

If Chris Baumgardner can do the same thing tomorrow that he's done every day for more than a week, he just might leave the nation's capital with his first tour-level victory in hand.

The North Carolinian bagged 16-07 today and will take a 1-pound lead into the final day of the Potomac River FLW Tour. He's caught at least 15 pounds every day he's been here û during practice and competition û and a 2-day total in excess of 31 pounds might be enough on a fishery where 4-pound bites are getting harder to come by.

To win, he'll have to hold off David Dudley, who'll be in search of his second $125,000 payday of the year and a Tour win to match his FLW Series Eastern Division victory at Okeechobee earlier this year. The Virginian is 2nd with 15-07.

Florida's Bobby Lane is next with 12-15. He's been in either 2nd or 3rd place after each day's weigh-in.

Here's how the field shakes out with 1 day remaining (numbers in red indicate an angler's deficit margin from the leader):

Baumgardner said he had more trouble compiling his mid- to high-teens bag today than on any other day, and that's understandable. A bright sun emerged for the first time during competition and there was a considerable amount of pleasure-boat traffic on the river. That combination caused many of the fish to hunker down in cover.

Also, the change of the launch site from Charles County, Md. to Washington D.C. for the weekend forced several of the finalists to make 40-mile runs to their best stuff. It took some more than an hour and a half to get back due to numerous no-wake zones, so they were limited to about 5 hours of fishing time.

There are still a lot of 5- and 6-pound fish around, though, so nobody was ready to concede anything. Dudley's pattern is all about being in the right place at the right time according to the tidal movements, and Lane is still getting a ton of bites, so those two especially like their chances.

Tomorrow's weather forecast calls for isolated thunderstorms. If the sun is obscured for a considerable amount of time, a 20-pound bag is possible, and such a stringer could bring just about anybody in the field back into contention.

The winner will be determined by highest combined weight over the final 2 days.

Baumgardner is the only angler in the Top 10 who's yet to catch a bag that weighed at least 19 pounds. But he's also the only one who's caught at least 15 pounds each day.

"It's getting considerably tougher. It wasn't a good morning at all, and my best bite was after 12:00. That's when I caught my three biggest ones.

"My best bite is late when the tide drops out, and I'm losing that as the tide gets later every day." 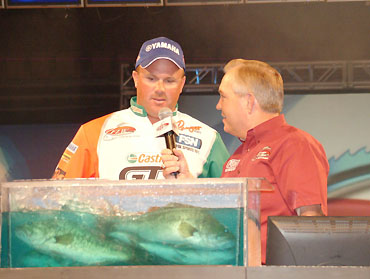 
David Dudley's versatility paid off in a 15 1/2-pound bag today.

He caught his entire bag today by throwing a Rad Lures Chatterbait over the top of milfoil. He fished lily pads in the morning on the first 2 days, but those were inaccessible today due to high water.

This is the second time he's taken the lead into the final day of a Tour event. The previous occasion was at Louisiana's Atchafalaya Basin in 2004, where he ended up 4th.

"I didn't do that well back then, but I expect to do better this time."

2nd: Dudley Mixing it Up

Dudley used a variety of baits to put together today's bag.

"It was a mixture of topwater, flipping and Senkos," he said. "In June tournaments, you'd better be able to do just about anything."

He said his key is his understanding of the tides. He's focused on a different area on each day of the tournament.

"I'm not running the tides, but I have certain areas that are good at certain tides. I'm picking certain areas and going to them when I think the tide will be right."

He caught about a dozen keepers today, and all weighed about 3 1/4 pounds. He'd take his chances with an identical bag tomorrow.

"I'm thinking it'll take about 31 (pounds) total, and I feel confident I can get that. I don't know for sure, but I feel fairly good about it."

3rd: No Big Ones for Lane

Lane tangled with upwards of 30 fish today and boated more than 20, but none were bigger than 3 1/4 pounds.

"I just didn't get the quality," he said. "I missed a few fish, but I don't think any of them were big either. There's a lot of little ones around.

"I've been getting two or three good 4 1/4-pounders every day, but I just didn't get that bite."

He fished the same grassbed he's exploited all week.


Bobby Lane caught a lot of fish today, but none were of exceptional size.

"I know there's some good ones that live there, and I know I didn't hurt them too bad the first 2 days."

He thinks he has a chance to win if he can catch at least 17 pounds tomorrow.

"Winning's all about making the right move at the right time, and I'll probably have to get the right bites in the morning. And I'll have to catch a 5-pounder somehow."

Wick shared his best area with several local-tournament competitors, and he said they all suffered harassment from a guy in an airboat.

"He just kept buzzing and buzzing right around us," he said. "I guess he wasn't a fan of tournament fishermen."

He won't go back there tomorrow. Instead, he'll return to the place where he spent most of day 1.

He's targeting wood and caught eight keepers today, but nothing over 3 /12 pounds.

"The fish actually moved outside of the cover for the first time today. The area I'm in has a lot of trees and there's quite a bit of shade through most of the day."

An angler competing in a local tournament was in Ray Scheide's best area when he arrived this morning, and another contestant in this event was on his primary backup spot. He spent much of the day in a search for new water, but didn't find any that harbored larger-than-average fish.

He said his No. 1 locale û which gave up his day-best 21-06 bag on day 2 û isn't big enough to accommodate two boats. 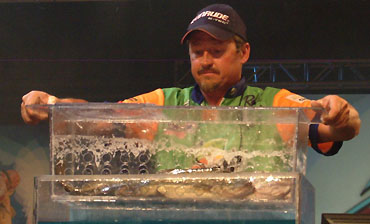 "It's pretty much a one-man deal, and I watched the guy catch about 18 pounds right in front of me," he said. "I can't fault him û he was in a tournament too, and you always want to win, whether you're competing against three guys or 200.

"I don't have any excuses. I should have been able to put something else together."

He'll head for his primary spot first thing tomorrow and hope that nobody's beaten him to it.

"If I'm the first one in there, I know I can get some big ones. They're structure-oriented on a grassy point, and you pull in and it's just bang, bang, bang. They're very easy to pick off."

> Dudley isn't wild about the change in launch locations for the weekend. "It doesn't allow us the time to make hardly any decisions on the water," he said. "You have time to make about one adjustment, and it had better be right. After that, you're up the creek."

> Cut leader Jack Wade of Tennessee (7th) made a long run to the south this morning, but it wasn't as productive as he'd hoped. He ended up weighing a fish that barely made the 12-inch minimum, which took effect today per Potomac River Fisheries Council regulations (the minimum was 15 inches for the first 2 days). "That fish was a peanut," he said. "I thought I'd be able to go to the grassbeds and cull, but it didn't happen."

> Sandy Melvin (8th) said he lost several good fish. "I was throwing a Super Spook and I had a couple of them blow up on it, and they just missed it. Those were 3- or 4-pound fish, I'm sure. Then I lost about a 4 1/2-poundder flipping a (Berkley PowerBait) Chigger Craw that just pulled off."

> Bob Blosser of Wisconsin, who fished with Jerry Williams today, won the co-angler championship with a 13-05 limit.

Here's the weather forecast for the final tournament day.