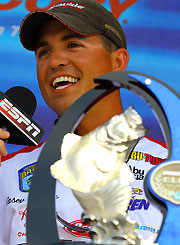 Rookie Casey Ashley dedicated his first win to his mom and dad – 'They brought me through a lot," he said.

The only thing that stood in the way of Casey Ashley this morning was himself. He carried nearly a 5-pound lead into the final day of competition at the Smith Mt. Bassmaster Elite Series in Virginia, and seemed to have plenty of fish left.

But he left the door wide open today when he failed to catch his fifth fish and weighed just 9-10.

His fortune came when Dean Rojas, who was within 5 pounds of him, plummeted out of contention with just three fish for 8-06.

Terry Scroggins made a charge when he weighed 15-05 – the day's biggest sack – but Scroggins couldn't overcome two big bites he lost in the closing hour. His total settled 2 pounds shy of Ashley's.

For the second time this year, a rookie had won a Bassmaster Elite Series event. First it was Derek Remitz at Amistad, but today was all about Ashley – the 23-year-old pro from Donalds, S.C.

What insulated Ashley best against Scroggins' assault was his 22-pound sack on day 2. It was the biggest by far of the event, and those extra few pounds made all the difference today. His 4-day total was 57-03 (or a little better than 14 pounds average per day).

Takahiro Omori continued his steady climb when he weighed 13-14 today. He started the day in 5th and improved two spots to finish 3rd with 53-15.

Skeet Reese extended his hot streak with a 4th-place finish. He made yesterday's Top 12 cut in a tie for 3rd, but an 11-10 limit prevented him from moving up. He continues to lead the Elite Series Angler of the Year (AOY) race.

And Morizo Shimizu, who began the day in 9th, caught a stout 14-04 today and moved up to finish 5th.

Ashley was emotional as he held the trophy aloft beside his parents, then struggled to find words to describe how it felt to achieve his lifelong dream.

"I'm so excited that I can hardly speak," he said, as tears welled in his eyes.

"First off, I want to dedicate this win to my mom and dad. They brought me through a lot. They're my biggest fans, my biggest supporters, (and) my biggest sponsors. And I want to thank my friends and fans at home, and everyone in Virginia – thanks for having us come to this beautiful lake."

"(This has been my dream) ever since I can remember," he added. "I've watched it on TV – seeing KVD win the Classic. Then this year, seeing Boyd Duckett win the Classic. It's a dream come true. I'm living the dream." 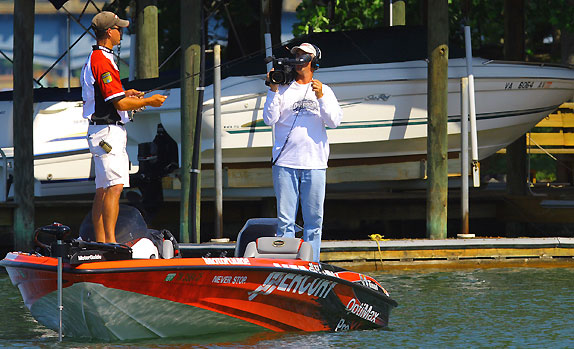 
Ashley utilized a two-prong attack – he threw a jig on rocky points, and worked a finesse worm on docks.

Ashley said that when the season started, he didn't think he'd win an event. "I just wanted to come out and compete – just at least stay in the Top 30 and make the (Bassmaster) Classic. It's an honor for me to be here. I can't even explain (how it feels)."

On whether he felt any pressure today, he said: "I tried not to think about (the pressure) this morning, but today at about 11:00 it set in. I was struggling, and I had it in my head. You have 'Big Show' Scroggins, Skeet Reese, Dean Rojas, Boyd Duckett. I told myself, 'You have to tighten up.'

"I struggled all day. It's tough."

About his failure to catch a fifth fish today, he said: "I didn't think (it was enough). I had four and I kept running and running all my stuff, trying to catch one more. I had the fifth one on earlier, but she came off, and I had no idea with four fish (that I could) win this thing.

"I knew those guys were going to catch them. I didn't think four fish would hold up."

Details on his winning pattern, as well as pattern information for the rest of the top finishers, will be posted soon. 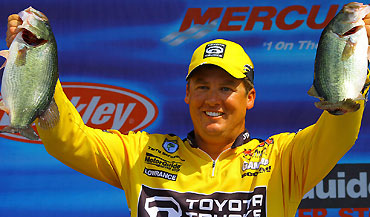 
Terry Scroggins said he lost what were likely the winning two fish in the final hour today.

Scroggins said he lost the winning fish in the last hour today, and he's bummed about that, but overall, he's happy with his finish.

"I'm disappointed that I didn't win, but I'm tickled to death to finish where I did," he said. "It was the first time I'd ever been to this lake – I knew absolutely nothing about it – and I had an opportunity to win.

"What's disappointing is that with just an hour to go, I lost two 3-pounders. Those would have culled out two small fish. I could have really jumped up there and probably would have won. But that's the way fishing goes, and the best man won today."

He added that he didn't think Ashley would have left the door so wide open. Also key was that he struck out on topwater this morning, but ran new water later on, which was a big gamble.

"The boat traffic was just horrendous. It made the fish shut down a little – they dove a little deeper. I went up a different arm and got away a little bit. That's where I ended up catching them."

Omori loves power-fishing, and he'd never quite felt comfortable with the small stick. But that changed this week. He worked three different patterns – topwater, bed-fishing and shakey-fishing – but the shakey was most responsible for his finish. He also ran new water each day.

"I feel good about it, just because I caught most of the fish on a spinning rod and 7-pound line this week," he said. "(That's) normally not my strength. That (gives) me good confidence (in it), and fishing new techniques is fun.

"I really enjoyed it. It gave me good confidence to fish the rest of the year. I'm ready for those summertime tournaments and the smallmouth."

Reese extended his lead in the AOY race today, and surprisingly, he spent the entire day fishing within sight of the launch.

He's missed the Top 12 cut just once during the regular-season this year, and with this, he now has three Top 5s on his 2007 stat sheet, plus a 2nd at the Bassmaster Classic.

About his choice of fishing area, he said: "I had a good day today – I caught a lot of fish. It's one of those deals. I stumbled on this little area over here (near the launch) the second day. I saw fish swimming everywhere. I caught a few fish here yesterday, and today I caught every single one right out there with a Berkley Hand Pour Power worm – just dragging it real slow." 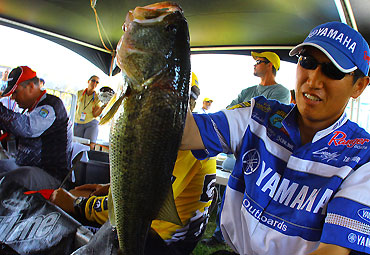 
Takahiro Omori especially likes his finish because he did it with the small stick – something he'd never been comfortable with in the past.

About his finish, he said: "I did what I wanted to do. I got a solid finish, some solid points, and (I'm still) leading (AOY)."

Duckett was on the mother lode to start, but things started to go downhill on day 2. The current stopped, and that killed his deep bite. He went back to it on day 3 and weighed 7-11, and said that was his undoing.

"This has been a good tournament," he added. "It's a super lake, and I like fishing this way.

"Yesterday was the day I messed it up. The deep fish didn't bite for me. I killed them all week on that Berkley Hand Pour worm, and today they bit it again.

With just a few right bites, Rojas could have walked through the door that Ashley opened. All he needed was 14-04 to clinch.

"I was quite surprised – I thought I could catch quite a few more than I did," he said. "I got off to a great start and caught three in the first hour and a half. I thought, 'With a couple more big bites, I can catch Casey.'

"There's only one way I knew to catch a 5- or 6-pounder here, and that's to throw Kermit (a Spro BronzEye frog)," he added. "I did it a few times in the tournament, and I stuck with my guns. I don't regret anything. I had a whole lot of fun."

Virginia's John Crews went from 81st to 39th to 10th. He then caught 12-10 today and moved up another two spots to finish 8th, but things could have been a whole lot different if not for his 7-10 day-1 disaster.

The problem on day 1, he said, was some confusion, which was his own fault.

About his finish, he noted: "I feel pretty good. I feel like the last 3 days I did about as good as I could."

And concerning the "confusion," he said: "On day 1, the first spot I stopped on, I made a handful of casts with a worm. Then I threw in some brush with a crank and hooked a 3-pounder. When I got it up to the boat, I got excited and went to swing it in and pulled the hooks out of the fish.

"The rest of the day, subconsciously, I was scared to throw the crank in fear of losing another fish. It limited my lure selection, and you really can't do that."

Later that night his mistake sunk in, and the next day he went back to throwing the crank and worm.

"That's what I usually do this time of year," he added. "I just kind of got back in the groove. That's what I should have been doing right off the bat, but that one fish confused me. I got scared."

He lost the fish on an old Poe's crank, and also threw a Rapala DT 16 and Norman DD22.

New York's Matt Sphar, another rookie, notched the first Top 12 finish of his career yesterday when he made the cut in 8th. He caught four for 9-05 today and slipped two spots to finish 10th. His sack included a 4 1/2-pounder.

"I thought I had a cove that would produce quality fish," he said. "I spent a lot of time in there, and this morning I'd seen some big fish. I thought I'd milk it and get them to bite. It didn't work. I didn't get a big fish to bite in that cove."

He later caught a big fish on some docks, then shortly after caught his 4 1/2-pounder off a point. And he lost what he said was a big fish that would have given him "a nice bag."

Also notable was Smith Mt. was the only lake so far this season that he'd fished before. And after the next event at Grand Lake in Oklahoma, the tour visits his home state of New York for two regular-season events (plus a Major).

"I'm looking forward to getting up to some of the lakes I've fished more," he said.

> About the next tour stop at Grand Lake, Ashley said: "I've never seen it, and I haven't heard much about it. The only thing I've heard is they'll bite a jig. That's pretty much the only thing I need to know."

> Wolak, who slipped one spot to finish 12th, noted: "Today I went way up the river and tried some stuff I haven't fished in years. I took a risk. That's what it's all about when you're in 11th place."