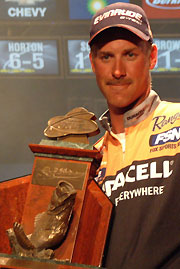 Some things are worth waiting for, at least if you're Andy Morgan. The 12-plus-year pro has been close a lot of times, but there was always someone just a touch better – someone who celebrated in the spotlight while he slipped quietly offstage.

Not today. The FLW Tour stalwart stuck an 8-00 bag and overcame a 2 1/2-pound deficit to win the stew-meat tough Wal-Mart Open (Beaver FLW Tour) by more than 2 1/2 pounds.

After yesterday, it really was a two-horse race – Morgan vs. then-leader Jay Yelas. But Yelas had been the most consistent all week: 10-11, 12-15, then 11-13 yesterday, whereas Morgan struggled to surpass 10 pounds on days 2 and 3.

But Yelas shared water all week with day-1 leader Andy Montgomery, and in the end, he just ran out of fish, which left the door open for Morgan.

For the win – his first ever at the tour level – Morgan banked $200,000. Not only that, but he shot up to 2nd in the FLW Tour Angler of the Year (AOY) race, where he trails new leader Yelas by just 7 points.

Andy Montgomery, like Yelas, struck out at the deadly dock this morning, but he scrambled late to catch 7-06. That moved him up two spots to finish 5th.

The odds were certainly in Yelas' favor. He was red-hot – this was his third Tour Top 10 in a row – and he was on the mother lode. But four anglers pounded those dock-fish each day (Yelas, Montgomery, and their co-anglers), and eventually removed 40 keeper largemouths.

Also notable is that, as the runner-up, Yelas has now finished 2nd in the last two FLW Tour events.

Morgan, on the other hand, made an important adjustment yesterday. After 2 days of running and gunning, he settled into a single area and committed himself to making it work. 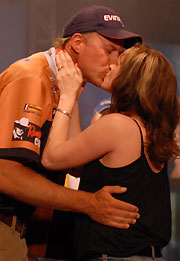 
Morgan's first tour-level win came after more than a decade of competition.

He exercised discipline, and stayed the course. It was the right move from a shrewd veteran.

"It's incredible," Morgan said of the win. "It really hasn't sunk in yet. I really don't know what to say.

"To come to Beaver, which has been sort of my nemesis, and win my first event – it's incredible, absolutely incredible. And I did it basically with a spinning rod. Five years ago, there was no way you could even get me to put one in my boat. Now, the last 3 years, I've got at least five in the boat all the time."

He noted he was sort of in the same bind as Yelas this morning – his schoolers "never came up" – so he had to "grind it out with a shakey-head and a swimbait.

"I fished the same area (as day 3), and didn't change up anything. I made one little run down the lake around noon, just for insurance. I thought I had to catch largemouths, so I kept shooting the big gun. As I come to find out, I didn't need to."

Despite so many near misses over the years, including 35 FLW Outdoors Top 10s at various levels, he said he never doubted his ability to win at the tour level.

"I knew I could. You just have to keep playing the game. When your number pops up, it's your time to win. I didn't see this one coming. Based on practice, I didn't think I had a good chance to win.

"I knew one area with about 50 boats in it. I just figured out how to catch them a little better than the other guys."

He threw a number of different baits, but said his key was a War Eagle shakey-head teamed with a Zoom finesse worm. Also critical was the Sworming Hornet Fish Head Spin, which he used to catch schooling fish immediately after the morning bite cooled off.

The full details of his winning pattern, as well as pattern information for the other top finishers, will be posted soon. 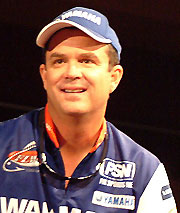 
Jay Yelas said opportunities like this come along 'once in a blue moon.'

"I just needed one more keeper today and I would have won the tournament. And that was kind of surprising that I didn't catch any on that dock. I guess we just fished it out. I thought there was surely enough for one or two keepers today.

"If I catch one keeper there today, I win," he added. "But I caught zero and just scrambled the rest of the day. That's how close I was to winning. I just feel terrible that I couldn't pull it off. It's a crazy game."

He did tip his hat to Morgan.

"Andy's had 35 Top 10 finishes in FLW including BFLs, Strens, all that," he said. "So you talk about somebody being due for a win, he was for sure. And he's a wonderful person. I think the world of him."

About this being his second runner-up finish in as many events, Yelas said: "It's kind of bittersweet, in that (it means) you're fishing really, really well, but it's bitter at the same time because you're one bite away from winning.

"So it sure beats the heck out of 50th place or whatever, and it's good to be on a roll, because it keeps me hungry to win the next one. If I'd won, I'd have probably went into a little more relaxed state. But this keeps me hungry.

Beehler was clearly the hometown favorite this week. He lives just up the road in Bella Vista, Ark., where he works as a full-time fishing guide.

This was his first-ever FLW Tour event, and he was near tears yesterday while on stage.

Tonight, he was just as emotional, and fought to find words that could describe the event. 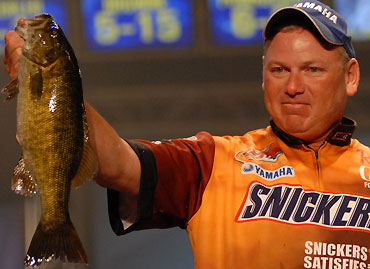 "I don't know what more else I could say – it's been a great 4 days, and this has been a lifelong dream," he said.

"I had a little more fun today. I kind of wanted to take revenge. I lost a 3-pounder yesterday that hurt me, and I just hunkered down and changed my strategy a little bit.

"This is a fun deal," he added. "This is a dream come true. I know a lot of friends of mine who've dreamed of doing what I'm doing right now. Thanks to everybody that has come up and shook my hand and pushed me on – every year telling me to keep pursuing it."

This was the first-ever Tour Top 10 for 4-year pro Jacob Powroznik.

"I feel ecstatic – I'm excited," he said. "When you come to Beaver Lake, it's kind of a little bit of a luck thing – getting two quality bites a day to win.

He added that good decisions were key this week, and have been all year. That's one reason he's now up to 16th in the AOY race. He already has a Forrest Wood Cup berth through the FLW Series, but he likes his AOY position nonetheless.

"It's probably 10% skill, and probably 90% decision-making," he noted. "Pulling up on the right point at the right time, and just making the right decisions – that's what I feel it's about."

Montgomery, a rookie, made a splash when he led with 13-11 after day 1, but things went downhill from there. On days 2 and 3, the fish bit on Yelas' side of the dock instead, which forced him into scramble mode. And today, it was a dead sea in there.

"Either all shad left or we caught all of them out of there."

6th: Morgenthaler Fine With it

Chad Morgenthaler began the day within striking distance – he was 3rd and 4-10 behind Yelas – but a 5-pound limit dropped him three spots to 6th.

The good news for him is this finish moved him up to 6th in the AOY race.

"Everything went good for me this tournament," he said. "I just ran by the seat of my pants, and really scratched around for the first 3 days and got a good bite."

He added: "I can't tell you how excited I am to be with FLW Outdoors, and in my first Top 10. I've got a good year going."

> After Beehler lost a good fish yesterday, he decided not to bring a net today. "I didn't want to be in a hurry today," he said.

> Browne, who finished 7th, noted: "This was a stellar tournament. I had a great time. I've really struggled at Beaver in the past, so I'm really tickled to have a Top 10 here." He added that he caught all his fish on a 6" Berkley Wacky Crawler, which he fished on the new Berkley Trilene fluorocarbon (6-pound).

> About his 8th-place finish, Ray Scheide said: "I wasn't on a lot going in, but I had a great tournament. Going in, I would have taken a Top 10 and gone home. I was real blessed with a few nice fish the first 2 days to make the cut."

> Dwayne Horton finished 9th, and was assessed an 8-ounce penalty for a dead fish. He noted he caught it deep, and it likely "got the bends" when he brought it up. His final weight today was 2-08.

> After he zeroed yesterday, Alfred Williams caught 5-08 today, but remained in 10th. "Everybody comes into this to get into the Top 10," he said. "I was just so excited (to do that)."