Ultra-Consistent Nixon Goes Up By 1-05 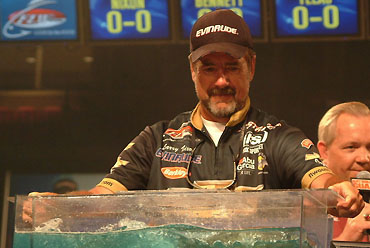 Larry Nixon's steadiness has pushed him to the top of the standings at the Norman FLW Tour.

Larry Nixon's bags at the Norman FLW Tour keep improving by an ounce or 2 each day, and he keeps moving up the standings by leaps and bounds.

The Arkansas legend caught 12-09 today and will take a 1-05 lead into day 4 in pursuit of his 17th tour-level victory. If he achieves it, he'll snap a 5-year winless drought that's the longest of his stellar career.

Fellow Arkansan Scott Suggs caught 11-04 today and sits in 2nd. California's Michael Bennett, who'll take over the Angler of the Year lead after this event, is 3rd with 11-00.

Ohio's Vic Vatalaro caught 10-13 today, which was good enough for 4th. Arizona's Gabe Bolivar rounded out the Top 5 with 10-02.

Here's how the Top 10 field looks with 1 day to fish (numbers in red indicate deficit margin from leader):

After what transpired today, just about everything seems to favor Nixon. His weights have been so steady (12-06, 12-07, 12-09) that it appears he's bringing the same five fish to the scales each day. He was 32nd after day 1 and 10th at the cut.

Also, he's fishing a stump pattern, and the sun helps him. Tomorrow's forecast for the Charlotte, N.C. area is for a completely blue sky.

Stumbles today by the two local hotshots and the other hall-of-fame-caliber angler in the field didn't hurt him, either.

The other seven are all within 3 1/2 pounds. But if Nixon's got another 12 1/2-pound bag in him, then it'll take nearly 14 pounds to topple him. That's a tall order on this pond right now.

The Weather Channel predicts a high temperature of 82 degrees tomorrow, with wind out of the west/northwest to 12 mph. The winner will be determined by highest combined weight over the final 2 days.

Unlike most of the final field, Nixon isn't focused on docks. He fishing primarily stumps, with some logs and rocks thrown in for good measure.

"I was fortunate to find a pattern and an area where I don't have to mess with the docks," he said. "It's been pretty consistent for me, but I don't know if I can get another 12 pounds tomorrow or not.

"I might have to go check another area in the morning. I've been struggling early, and I know if I go back in there right away, I'll mess up and panic and leave. I'll just wait for the fish to tell me when it's time to be there."

He fished for about 90 minutes before he caught his first keeper today. He had a limit by about 11:00.

He's catching most of his fish out of 3 or 4 feet of water. He needs the sun to make spot-on casts to the structure.

"I've got to be able to position the fish and see my targets. If I can't see the stumps, then I'm just flinging it up there, and I can't get bitten that way."

"I don't think I'll be nervous at all. I'll just settle down and go fishing, and hopefully what I catch will be enough. 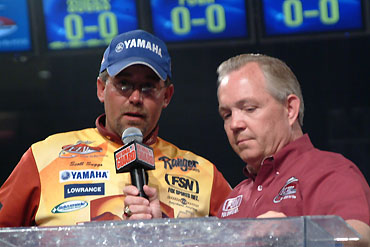 Suggs had been catching a limit within the first hour every day. It took him 3 hours to accomplish that today, but then he caught fire.

"I probably caught another 15 to 20 keepers," he said. "I just had to cull through them to get some quality."

He weighed three spotted bass and two largemouths. The biggest was a 3 1/4-pound spot.

"I didn't realize the quality that I had – I figured I had about 9 1/2 pounds. These spots here are long and skinny. They're not thick like they are back home."

His pattern is dock-oriented, but he's fishing stretches that are loaded with stumps. He's catching his fish on a shakey-head worm.

"I don't care if there's five stumps between the docks or 20, I'm not letting any of it go to waste."

He thinks he'll need close to 14 pounds tomorrow to have a shot at victory.

"I found one place in practice where I caught two 4-pound spots. I've caught keepers there (during the tournament), but that school of big spots hasn't moved back on it.

"If they're there tomorrow, I might have a chance." 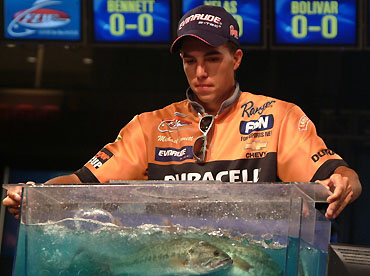 
At 22, Michael Bennett is poised to become the FLW Tour points leader.

The 22-year-old Bennett fished a lot of new water today and caught six of his seven keepers from locales he hadn't previously visited.

"If I can go out and catch 12 pounds tomorrow, I might have a chance to win, but Larry's been unbelievably consistent."

He's fishing docks, and his action doesn't start until about 10:00 each day.

"I caught a limit over the next hour and culled once or twice the rest of the day. I found one new stretch of docks, and they just happened to be there."

He finished 6th in the points last year and will be thrilled to see his name at the top of the list next week.

Like Suggs, Vatalaro underestimated the size of his bag prior to weigh-in.

He caught four quick keepers this morning, but didn't get his limit fish until the final 5 minutes of the day. He had a couple off miscues in the interim.

"I lost a couple, and then I got snagged on a rock and didn't re-tie. I turned and made a cast and set the hook on a good one, and it just snapped off that 6-pound line. That was just stupid."

He thinks he'll fish better tomorrow if he gets the limit out of the way early.

"That would help me relax, then I could just put my head down and go fishing. I'll try to get five on jerkbaits, and then go to the jig to bump up my bag.

"I'm still going for the win. If I can get a good limit and one 4-pound kicker to go along with it, everybody else is going to be in trouble." 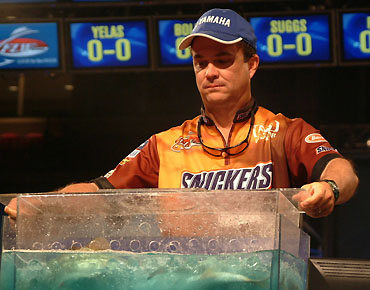 Yelas weighed only four fish and never had the fifth one on.

"It was a pretty lousy day of fishing," he said. "I'd been catching them on a swimbait and I stuck with it, but I couldn't get them to hit it today.

"I'll probably do the same thing tomorrow, because now I need a big sack to catch up."

He got three bites on the swimbait and one on a worm. One of his four fish was a spot – only the second one he's caught all week.

"I just couldn't get in any kind of groove. But the weights are still close, so you never know. I could catch a couple of big ones and be right back in it.

"My spirits are still up just knowing that I have an outside chance."

> Nixon had to be reminded that his last win was at Wheeler in February of '02. "It's been so long that I couldn't remember it."

> Bennett finished 6th in the points last year, but this is his first Top 10 since he was the runner-up at Wheeler in '05. "I set a goal to get one every year, and it's nice to have it out of the way."

Here's the Weather Channel's forecast for the final tournament day.