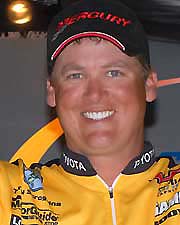 Today's sunny skies were perfect for the ledge-fishing pattern employed by Terry Scroggins and his teammates.

The 4-man team captained by Terry Scroggins caught 119 pounds worth of Lake Fork bass today to win the inaugural Toyota Texas Bass Classic with a 3-day total of 244-12.

The team, which also included Chris Daves, Frank Ippoliti and James Niggemeyer, started the day with a 15-pound deficit to Alton Jones' squad, and was still 10 pounds down after the morning flight. They made up nearly 45 pounds during the final 4-hour session of the Professional Anglers Association-sanctioned tournament.

The dark, stormy weather of the first 2 days gave way to bright sunshine today, which was ideal for the Scroggins team's deep ledge pattern. Conversely, the light hindered the Jones team's swimbait bite, and they had to resort to sight-fishing this afternoon. They couldn't keep up.

All 20 anglers fished both sessions on the final day.

Scroggins was thrilled that he'll forever be known as the winning captain in the first event of its kind.

"It's awesome," he said. "We had 160 of the best anglers in the world here, from both FLW and BASS, and to go out and beat all those guys is pretty cool.

"I had a really good feeling that we were going to catch them good today, because with ledge-fish you're always better off with high skies. It really paid off."

The ledge, which Scroggins discovered in practice in an area called Big Mustang, was at the juncture of a creek-channel swing and a point. The channel was 12- to 20-feet deep and featured a lot of standing timber.

"When I first found (the fish), they were up on the hump. But as the tournament progressed, they got down into the timber in the channel, and we had to jockey around a little bit to catch them."

Their main weapons were crankbaits – a Bomber Fat Free Shad and a Bill Norman DD22.

"It was a total team effort. Everybody worked real well together and gave everything they had, and it paid off."

They never had company on the ledge, and he said they got excellent cooperation from the spectators today.

"There were probably 25 to 30 boats watching us, and nobody got onto that spot. That was really cool."

Scroggins and Daves spent the entire day on the ledge. Ippoliti and Niggemeyer went to Little Mustang this afternoon and caught sight-fish on Senko-type baits. 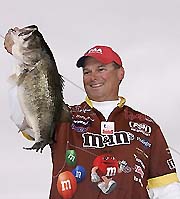 
The 11-02 brute that John Sappington caught on day 2 held up as the big fish of the tournament.

2nd: Downer for Jones and Co.

Jones was disappointed that his team couldn't close out the win.

"You always want to win, but you have to take the bad with the good. We just have to keep telling ourselves that 2nd place is a great finish, even though it doesn't feel so good right now."

The team still had a 10-pound lead going into today's second flight, but managed just 21 pounds this afternoon. Jones sight-fished for the majority of that time, which left partner Steve Daniel with limited options.

"Sight-fishing is what I really love to do, but it's not a good plan for a team tournament. Steve was great about it – he recognized that that was our best chance."

The duo had a strong swimbait pattern going for the first 2 days, but it wasn't effective under today's sunny skies.

"The conditions really did hurt what we'd been doing. The fish would follow (the swimbait), but they wouldn't eat it, so I quickly assessed that we had to change things up."

The morning duo of Russ Lane and Kyle Mabry got the team off to a strong start, as they did each day. They cranked the same offshore ledge where they'd started every morning, and Lane's first fish was a 10-15.

They relied on the same crankbaits as Scroggins' team – Lane threw a DD22 and Mabry fished a Fat Free Shad.

"Our only problem was that place was dead by 8:00 every day."

Walker was happy that his team achieved a Top-5 finish on a lake with an abundance of quality fish.

"It's so much fun to go to a place where you set the hook and the fish fight back. I only caught one short fish (under 14 inches) all week, and I never did send one airborne."

The team spent almost the entire tournament throwing swimbaits, even though none of them were very familiar with that type of lure coming in. He was teamed with Dan Morehead, Joe Thomas and Johnny Lesesne – none of whom are fishing the Bassmaster Elite Series this year.

Therefore, they didn't partake in the BASS circuit's recent western swing, where swimbaits were all the rage.

"None of us showed up with hardly any of them, except maybe some older models that had been around awhile. We had to beg, borrow or steal them anyplace we could get them.

"Every night we were asking people what they could give us, so we had all different colors and shapes and everything. We just kind of scrapped them all together and made things up as we went."

They focused primarily on places that were holding pre-spawn fish.

"It might have been a point or a turn – just something near a spawning area. The depth was mainly from 3 to 6 feet, and some of the places had grass or wood, or both."

They settled on the swimbait pattern after Morehead used one to catch an 11-pounder in the pro-am on Thursday.

"All we had going before that was sight-fishing and some other spawning stuff, and we were all willing to abandon that. After Dan caught that big one, we thought we might as well give it a try.

"Obviously, there's a time and a place where they're very effective. It was working for us, so we just ran with it."

Howell was happy with his squad's high finish, but was dismayed that they didn't make a better showing today.

"It feels great to make the Top 5," he said. "Since it was the inaugural tournament, it's nice to start out and get a good finish in the record books.

"It's just disappointing to not do well on the last day. Even if we had done well, we probably couldn't have overcome the deficit from 4th place, but you still like to end a tournament with a good feeling."

They concentrated on shallow-water areas and employed a variety of techniques, but none were productive under today's bright sun.

"Everything changed with the bluebird conditions. We started running new places we hadn't been to, but we never gained the knowledge of what we needed to be doing.

"Still, it was probably the most fun tournament I've ever fished – it was well-organized and it ran real well. I'm really proud of everybody involved because I had my doubts that it would run as smoothly as it did."

> An 11-02 that John Sappington caught on day 2 was the biggest fish of the tournament. It garnered him a new Toyota Tundra.