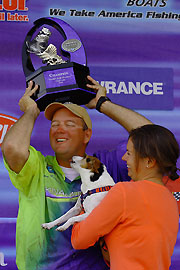 Steve Kennedy gets a congratulatory lick from his dog, Louie, as he hoists the trophy at the Clear Lake Bassmaster Elite Series. Holding Louie is Kennedy's wife, Julia.

How good were Steve Kennedy's final 3 days at the greatest whackfest in the history of tour-level bass fishing? How about this: You could throw out his day-1 weight, and he still would've finished 6th with more than 100 pounds.

The Alabamian caught 32-10 today to win the Clear Lake Bassmaster Elite Series with a BASS-record total of 122-14 over 4 days. He caught all but 20 pounds of that after day 1.

He finished 5-08 ahead of Californian Skeet Reese, who notched 2nd- and 4th-place finishes in the back-to-back events in his home state. Reese bagged 27-10 today, and he also broke Preston Clark's year-old, 4-day mark of 115-15 at Santee Cooper with a 117-06 total.

Greg Gutierrez, another Californian who led the first 3 days, ended up 3rd. His 16-03 today was less than half of what he brought to the scales on each of the first 2 days.

Here's a look at the remainder of the final Top 12:

After catching 20-00 on the first day – a weight that tilts toward the low side of mediocre on this fishery at this time of year – Kennedy averaged more than 34 pounds over the next 3, including a tournament-best 40-07 on day 2. It was more than the red-hot Reese could muster, and more than the fading Gutierrez could withstand.

He'd never thrown a swimbait prior to the season opener at Amistad, but he's figured it out quickly – he caught a day-best bag at that event too. He's also become a collector, having purchased more than $3,000 worth of the high-priced lures on this western excursion. 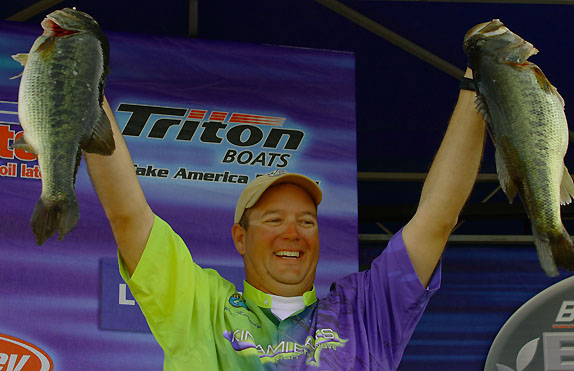 
Kennedy holds up part of the 32-10 limit that gave him a come-from-behind victory.

Swimbaits weren't as productive for others today, particularly home-staters Gutierrez and Jared Lintner, who caught just 17-07 and dropped five places to 9th.

The weather may have played a role in that – a storm front will arrive tonight. The sky was overcast and the high temperature dipped a few degrees into the high 60s.

Whatever it was, it didn't affect Kennedy.

Kennedy picked up his first Elite Series win to go along with his two FLW Tour triumphs at Kentucky Lake, and now holds one of the three most prestigious BASS weight records.

"It's awesome," he said. "Last year I had three good opportunities (to win an Elite event), and I didn't capitalize on any of them. I also had a good chance at Amistad (this year) and didn't get it done.

"It's nice to get that off my back because you only get so many opportunities, and I might not get any more this year. When you get close, you want to pull it off."

He called the new record "unbelievable," but gave much of the credit to the lake.

"These have got to be the fattest fish on the face of the earth. The ones at Amistad have mouths two or three times this size, and they swallow a swimbait out of sight.

"Here a 5-pounder can barely get it in its mouth. They're just in unreal condition."

He said the new standard could have been considerably higher if not for a couple of unfortunate occurrences today. He had a 10-pounder in his hands (his biggest weigh-in fish was a 9) and he broke off one bigger than that.

"I had to release the 10 because it was hooked just outside the mouth. The other one was 11 or 12 and it pulled the split-ring right off my bait.

"I'd borrowed bigger split-rings to put on the new baits I'd bought, but for some reason I didn't change them out on the one I had tied on."

Reese has six Top 10s in his last seven events dating to August of last year – a run that includes two runner-up finishes (one at the Bassmaster Classic). He's happy with his consistency, but he's ready to win.

"I'm pleased with all the Top 10s, but this is just like the Classic – 2nd sucks," he said. "I'd like to think I'm due to win one, but you never know what's going to happen.

"I was happy to see Aaron (Martens) win at the Delta, because he's had a lot of close calls too. I figured if he could pull one out, then there was hope for me."

He said he caught fish "here and there" throughout the day and lost one that was between 8 and 10 pounds. 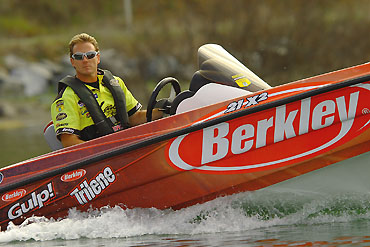 
Skeet Reese caught a strong final-day bag, but wishes he'd spent more time at the other end of the lake.

"My starting area wasn't as good as it was yesterday. I got a lot of bites, but they just weren't eating (the bait).

"I was in the upper end and it was slick and calm, and I just kept trying to make something happen. I found out they had plenty of wind and rougher water on the lower end, and if I'd have known that, I'd have been down there."

Gutierrez said the experience of leading an Elite Series event was one that will benefit him down the road, but he was a bit disheartened that he couldn't close the deal.

"It's absolutely disappointing to push so hard and come so close, and then fall short," he said. "I'm proud of what I accomplished, but I had a lot of people (from Northern California) pulling for me, and I feel bad that I let them down.

"It's tough to have that monster (Kennedy) charging up from behind you when you're stumbling."

He had a couple of fish pull off today, and others had to be released because they weren't hooked in the mouth.

"I was plagued by involuntary releases all day. It's tough throwing a 4-pounder back when you don't have a limit."

He said he got a valuable piece of advice from Kevin VanDam yesterday after he'd pulled off his best fish to conserve some for day 4.

"He told me, 'Don't ever back off, or these guys will tear you up.' I might have been able to catch another big fish that would have at least put me over 30 again. I appreciate Kevin taking the time to explain that."

Swindle was pleased by his finish, especially in the wake of his 89th-place bomb the week before at the California Delta.

"It feels real good," he said. "At the Delta, my attitude was a little down, but my head was still up. There was a luck factor in catching those giants over there, and I wasn't going to let not getting any beat me down."

"It was nice to come here and rally back. It puts me in a good frame of mind, and I caught over 100 pounds, which has always been a goal of mine. And from just a fishing perspective, it was a lot of fun."

"That might be the highest high I've ever had in my tournament career. I'd seen it this morning around a wall, and when I finally got it to bite and I jerked and it didn't move, it doesn't get any better than that.

"It was a great moment for me, and I'm glad I sat down in the boat for awhile and let it sink in."

He threw a swimbait for most of the tournament.

"I bought some in the tackle store right by where we were staying just because they looked good, and they are good. I spent about $500 on them and I've used them for 6 days, and after a couple more days I should really have them down pat.

"At least I'll have figured out how to tie them on right."

Murray's finish was his highest in the 14 Elite tournaments to date.

"If I got to 100 pounds today I was going to be happy. That was my goal, and I'm pretty excited about that."

His day got off to a tremendous start, but then leveled off. 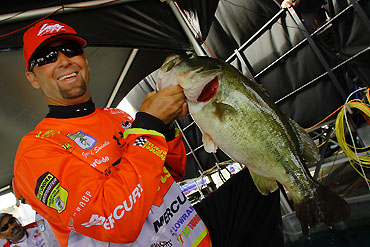 
Gerald Swindle described catching this 10-06 today as one of the highlights of his career.

He'd alternated between a swimbait and a finesse worm for most of the week.

"The swimbait worked today, but the worm didn't. I caught a few on the worm, but they were all 2- and 3-pounders."

"I had a couple of good followers early, and then I started catching fish, but they were all 2-pounders," he said. "At first I just kept throwing them back, but then I realized I'd better start keeping a few."

He resorted to a dropshot to secure his limit, then went back to the swimbait. He couldn't make it happen, though.

"They'd nose it, push it – everything but eat it. The only thing that was different (from previous days) was there was pretty much a haze all day, and the sun didn't come out until 1:00.

"I'd been catching most of my weight between 10:30 and 1:30. I was running willow trees, and any of them that had a limb that extended over the water, there'd be a big one there suspended, waiting to move up and spawn. Today I only found a handful of suspended ones."

If he had the day to do over again, he's not sure what he'd change.

"It was a fun tournament and I feel good about the way I fished. For some reason, they just wouldn't eat it today."

> Before this event, the biggest fish Kennedy had ever caught in competition was an 8-12. He exceeded that on both of the final 2 days.

> Gutierrez has known of Kennedy's prowess since they finished 2nd and 3rd, respectively, at the 2002 BFL All-American. "He's just very consistent. And when he gets on them, watch out."

> Reese took over the lead in the Angler of the Year race. For the updated standings, click here.

> Murray and Kelly Jordon (6th) both stayed at the home of Powell Rods owner Keith Bryan during the tournament. "That made things a lot easier on us."