BACK
Living With VHS – Part 2 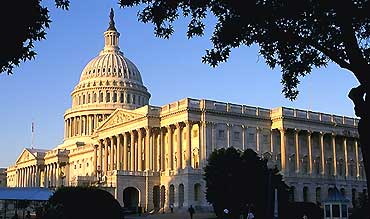 The fact is VHS is here – the uncertainty lies with how the U.S. and Canadian governments will proceed with regulation.

(Editor's note: This is part 2 of a 2-part story about federal VHS regulations and their effect on recreational and tournament angling.)

beyond the Great Lakes region.

Remember that there are seven affected or at-risk states – Illinois, Indiana, Michigan, Minnesota, New York, Ohio, Pennsylvania, and Wisconsin – plus the provinces of Ontario and Quebec.

Since Illinois, Wisconsin and Minnesota are affected or at-risk states, no live fish may be moved across the Mississippi between Minnesota and Wisconsin, or from Illinois into Iowa.

And don't forget about Indiana. Its sliver of land that touches Lake Michigan makes it an affected state. Therefore, tournaments on the Ohio River, which forms the southern boundary of Indiana, are subject to the same prohibitions.

Rainy Lake and the Rainy River in northern Minnesota are just like Lake Erie and the Niagara River – no live Ontario bass may be brought to a U.S. weigh-in.

And Illinois BassFans who plan to fish their summer events out of Ft. Madison, Iowa, will likely find that they're restricted to the Iowa side of the Mississippi.

The same goes for bass events launching from the Kentucky portion of the Ohio River.

The good news, if there is any, is that these regulations aren't yet permanent.

The Animal and Plant Health Inspection Service (APHIS), a division of the U.S. Dept. of Agriculture, enacted its VHS federal order last fall as an emergency measure. That order was followed by a comment period, and a more permanent interim order is forthcoming, likely this spring.

That leaves open the possibility of a tournament exemption for waterbodies that form a state or international boundary.

That said, the function of APHIS is to oversee the interstate and international movement of fish and wildlife, and to protect the U.S. agricultural industry (in this case, aquaculture). So although anglers do have a stake in what APHIS does, aquaculture is the agency's main focus.

APHIS spokesperson Karen Eggert said the agency is listening to several parties, all of whom have a stake in the outcome. "We had four public meetings to solicit public comments to consider while we draft the interim rule," she noted. "Our purview is over interstate fish movement, so those are the regulations we're looking at putting together – having a certificate to prove fish are VHS-negative, or killing a fish before moving it over state lines."

Asked if APHIS would consider a tournament exemption, Eggert said: "As they're putting the interim rule together, they're looking at all options. They're considering those possibilities. We realize it's an important issue, which has an effect on those in New York, Pennsylvania, Michigan, Ohio.

"But they also have to consider the big picture, and aquaculture health throughout the U.S. Whatever option protects aquaculture the best is what they'll use."

Bill Culligan, Great Lakes section head of the New York State Dept. of Environmental Conservation (NYSDEC), noted: "I can say that APHIS has been unwilling to make significant changes, to this point, although they are listening. They did modify the original order, which was no transfer, period. Now you can transfer if the fish are certified disease-free. But we're told that this spring they're considering making the order permanent."

If you're a BassFan who's somewhat confused about how the current emergency order affects tournaments on your border waters, you're not alone.

To help its anglers wade through the conundrum, the NYSDEC last Friday published a document titled Revised Fish Health Emergency Regulations in Response to VHS.

It includes a FAQ for tournament anglers which states: "It is not our intention to impact tournament activities on Lake Champlain or other border water shared with other states, and we will clarify this in the regulations before the bass season opens on Champlain."

Champlain forms a border between New York and Vermont. Since New York's an affected state, and Vermont is not, anglers may launch from New York, fish in Vermont, then bring fish back to the New York weigh-in. They may not, however, carry live New York fish in the box as they cross into Vermont. 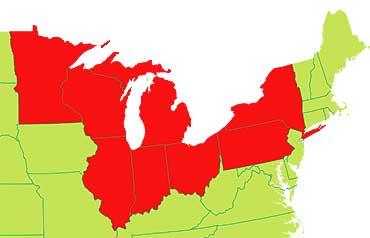 Think VHS doesn't affect you? If you fish the Ohio River, Mississippi River, or other border waters of affected states, it does.

Ohio is bordered by Lake Erie, but also by the Ohio River – an unconnected waterway that separates Ohio from Kentucky and West Virginia. There again, tournaments that launch on the Ohio side of the Ohio River could permit live Kentucky or West Virginia bass into Ohio, but no live Ohio bass could leave the state – even for a few minutes as an angler negotiates the river.

Michigan gets the 6-point whammy, as it shares common water with Ohio, Indiana, Illinois, Wisconsin, Minnesota and Ontario – all affected areas with no live transport of prohibited fish permitted. And remember the ban also includes walleyes – arguably the major Michigan tournament species.

Michigan Dept. of Natural Resources fish production manager Gary Whelan said on behalf of his agency: "We're certainly dedicated to dealing with tournament concerns and VHS. We've already shown that with testimony and written input during the comment period. Tournament fishing is a large industry in Michigan for all species.

"We think there's a couple of serious shortcomings (in the current federal order) that need to be addressed, and again, the disease needs to be managed on a watershed basis – not on a political-boundary basis."

At this point, several possible scenarios could unfold as the VHS era moves forward.

One would be that APHIS enacts an interim order with the same language as the current order. That's the worst-case scenario for tournament anglers.

Another would be that APHIS enacts an interim order that includes some type of exemption for border-water tournaments. This would be a victory for tournament anglers.

Then there's the possibility that VHS already has, or will soon, spread throughout much of the U.S. At such point, an interim order could be revised to reflect current realities.

Whatever the outcome, the fact is that VHS is here to stay, and anglers might not have much say in how new rules are enacted. But if there was a time for anglers to voice their concerns, fisheries managers say that time is now – before the new interim order is issued.

Larry Willis, an Illinois Dept. of Natural Resources (DNR) microbiologist at the Illinois Fisheries Pathology Lab, has been close to the VHS regulation effort. He told BassFan: "I'd hope the (recreational fishing) constituency gets their voice heard. I do know the tournament issue has been brought up through the Great Lakes Fish Health Committee, of which we're a part."

He added: "As the DNR, we've made our voice heard, which is the voice of the anglers. But it's going to take a grassroots effort through legislators, at the congressional level, to emphasize the situation."

> Currently, the Canadian government has not enacted VHS regulations, which means it's legal to move U.S. livewell fish from affected states into Canada while tournament angling. John Cooper, a spokesman with the Lake Erie management unit of the Ontario Ministry of Natural Resources, said: "In our case, it's also a federal government decision. At this point in time, our federal counterparts to your federal agencies have not decided on any restriction of moving live fish across the border."

> Since part 1 of this story was published, neither BASS nor FLW Outdoors has issued statements clarifying policies for its 2007-season bass tournaments in affected states. However, various BASS Federation Nation and TBF Inc. chapters have mobilized around the issue.

To help prevent the spread of VHS, anglers are encouraged to do the following:

> Do not transport fish from one body of water to another. Note that this practice is typically illegal without a fish-stocking permit.
> Only release baitfish into the waterbody it was taken from. Bait purchased commercially should not be released into any body of water.
> Do not dispose of fish carcasses or by-products in any body of water.
> Remove all mud, aquatic plants and animals from all gear, boats, motors and trailers before leaving a body of water.
Drain your livewell, bilge and bait tanks before leaving the water you're fishing or boating on. Anglers or boaters using any waterbody known to be infected with the VHS virus should disinfect their livewells and baitwells with a 10% percent bleach/water solution. Rinse well to remove all residual chlorine.
> Inform your fishing friends about the fish health emergency regulations.

Additional fish may be added to the order as they are confirmed to be carriers of VHS.

According to the Ohio Sea Grant, penalties for violations of APHIS orders fall under the Animal Health Protection Act (AHPA) that was signed into law as part of the 2002 Farm Bill.

In a statement issued in 2002, the U.S. Dept. of Agriculture said: "The AHPA increases civil penalties to a maximum of $50,000 for an individual, although it remains at a $1,000 maximum for first-time offenders at ports of entry when such offenders are carrying the products for personal use and not for commercial gain. Civil penalties for other than individuals are increased to a maximum of $250,000 per violation with a maximum of $500,000 in a single adjudication."

Violators of the federal order on VHS may also be in violation of the federal Lacey Act. The Lacey Act Amendment of 1981 states: "Under this law, it is unlawful to import, export, sell, acquire, or purchase fish, wildlife or plants taken, possessed, transported, or sold: 1) in violation of U.S. or Indian law, or 2) in interstate or foreign commerce involving any fish, wildlife, or plants taken, possessed or sold in violation of state or foreign law. The law covers all fish and wildlife and their parts or products, and plants protected by the Convention on International Trade in Endangered Species and those protected by state law. Commercial guiding and outfitting are considered to be a sale under the provisions of the Act."

> APHIS Hot Issues (original and revised emergency order, plus Q&A about the order)