BassFans probably remember a 2-part story about veteran Mark Davis that ran a few months back. In it, Davis talked about his struggles last year – how the move from BASS to FLW had sort of left him reeling.

He knew what the problems were. One, he needed to adjust to the FLW Tour

format and start fishing in crowds – something he'd never done before. Two, he needed to ease the rigor of his presidency with the Professional Anglers Association (PAA).

The second need is still a work in progress, but it's improving. And the first – the crowd thing – he's all over it. At microscopic Lake Travis, site of the first FLW Tour event, he rubbed shoulders with the field and peeled off a 16th-place finish to start the year.

He took that success and built on it when he finished 6th at the triple-A-level Kissimmee Southern Open (out of 197 boats).

In the Q&A that follows, he talks Travis, Kissimmee, the PAA, and what he calls getting "his mind back on fishing."

BassFan: About Travis, that's a solid start. How do you feel about it, and the lake itself? Did it suit your strengths?

Sixteenth is a pretty good finish, compared to what I had last year. I guess you'd have to call it a good finish.

I wound up finesse-fishing – just trying to get a lot of bites. I had to go through a lot of fish trying to get it done that way. I guess there were a lot of other ways to catch them too, but I threw a green-pumpkin Strike King 3X Finesse worm three different ways – a Carolina-rig, shakey-head, and also a dropshot. I caught about an equal number on all three.

I don't know if it suited my strengths. It was a tough bite. And I don't want to use the word luck, but you had to be fortunate. You had to have one good kicker each day.

One or two fish made all the difference in the world. You never knew going into the day if you were going to catch one (a kicker). I caught one good fish the first day, but couldn't the second day.

Did you do what you said you'd do? Did you fish in a crowd?

Yeah, I did. I decided I've just got to. It's a mental discipline, and you just have to adjust to that kind of tournament.

I had people around me the whole time. I just accepted it. That's the way it is. You have to get in there and hold your ground.

And you can't leave. All the fish get found – that's the bottom line in those tournaments. So if you're not around boats, you're probably not around fish.

Did that give you some confidence, knowing you can catch them in a crowd?

Oh yeah. It did. But I don't know that it's a confidence issue. I've always had the confidence, but it's (more a) discipline. Even though I say I don't like fishing with all these people around me, it's a mental discipline to make yourself just get in there and do it anyway.

I knew that I can catch them. I just wouldn't discipline myself enough to go ahead and do it. My fishing instincts are to where I think I can always go find fish in the bottom of a bottle. I just can't run away from the boats anymore.

The next Tour event's at Ft. Loudoun-Tellico. Any early thoughts on that venue?

After Travis, you went to the Kissimmee Southern Open. You were 2nd after day 2, then finished 6th. How do you feel about that finish?

I had myself in position to win that event, and the weather got me in the end. We had some strong winds on Day 2. I'd actually caught my fish early that day, but it just destroyed the whole area I was fishing.

That happens in Florida. I had myself in position to win. I just kind of ran out of areas.

What did you do on the final day?

It was hard to adjust down there. So much of the water was muddy and full of silt after the wind blew so hard on day 2.

Actually, (winner) Terry Scroggins invited me to come up and fish in his area – the water was nice and clear. But the fish being post-spawn, they were schooled up and hard to find. I knew it would be almost impossible for me to go up there and find them. It was like a needle in a haystack.

And I wasn't about to get in his way. So I declined on that and just stuck it out.

I got two bites. One was 6-11, and I lost another over 4 pounds. There was a fine line there, because I could have easily put together a good stringer even in muddy water. But the odds are really against you when conditions get bad like that.

Would you say it's a good finish though?

You bet it is. With only three events (in the Open season), you've got to have three really high finishes. I got one down, and hopefully I can put together a couple more. 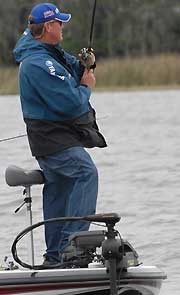 
Davis noted he's 'back to wanting to fish again.'

The next one's at Santee Cooper in early May. I like Santee. I've never fished it that time of year. It'll be post-spawn, and I like post-spawn fishing. I'm looking forward to that one as well.

Did you fish in a crowd at Kissimmee too?

That was your first BASS event since you moved to the FLW Tour and Series for 2006. What's your goal in fishing the Opens?

I'd like to make the (Bassmaster) Classic. You always want to try to make the Classic. It's a longshot with a 200-boat field, and you have to have a super year to do that.

You see several (other tour-level) pros fishing over here too, and you know that's what they're up to. It's another way to make the Classic. It always has been.

Did you go to this year's Classic at Lay Lake?

Yes. I was only there Saturday. I flew in and flew out, and I was back and forth between the Skeeter and Yamaha booths. It was overwhelming – all the fans I talked to there. It was nonstop meeting and greeting folks. It was good. I was glad I went.

About the PAA. Is that still taking away from your fishing?

Things are kind of getting off the ground with the PAA – things are looking good, and positive. Hopefully I can separate that task from my fishing. I'm not making excuses, but it has something to do with it. I have to learn to separate things.

What provided the impetus for the team format at the upcoming Texas Bass Classic? Was that something the anglers wanted?

It's something new and different. That's what Toyota asked for, and we're trying to deliver on that. It's a whole new deal.

I think we're looking at it more that way. It's not a qualifier. We're not trying to get points. It's just a one-time deal – a new format. It's going to be fun.

Something that's not talked about much anymore is the old pro-on-pro Bassmaster Invitationals, and how they often helped you guys learn from each other. It seems the team format might be similar, where guys on your team can learn from you, and you from them.

That's one thing I miss about the old Invitationals. You didn't learn something every time. But no matter how many times I look back, on the days I had with different guys, they learned from me, and me from them. You got to see every trick they knew.

Overall, it's been a pretty fast start, considering your struggles last year. What's been the biggest difference so far this year in your fishing?

Honestly, I'm back to wanting to fish again. I went through a period last year where I wanted to fish, but I was just really disheartened with the sport as a whole.

I let that be too much of a negative in my life. Fishing is all mental. You don't wake up one morning and not know how to catch them. It's all about motivation, and wanting to, and being positive.

I'm the kind of guy where I tend to worry, and want to save the world, and want to do things I have absolutely no control over.

I've tried to get my mind back on fishing.

> The closest Davis has fished to Loudoun-Tellico was at Douglas for a 2001 Megabucks. He led several days there, but finished 3rd to winner Rick Clunn and runner-up Dean Rojas.

> Several times, he's held the No. 1 spot in the BassFan World Rankings presented by Tru-Tungsten. He started this season ranked all the way down at 92nd, but has since climbed to 68th. 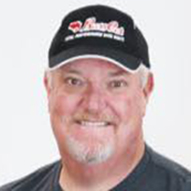