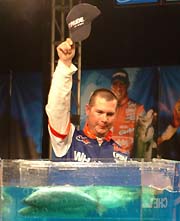 Aaron Hastings raises his cap as his winning weight registers on the scale on the final day of the Travis FLW Tour.

Aaron Hastings did nothing that was truly spectacular at the Travis FLW Tour. The best bag he brought in over 4 days wasn't among the Top 16 for the tournament, and he never caught an eye-popping hawg that awed the weigh-in crowd in Austin, Texas.

Actually, what he didn't do was totally indicative of why he won the season opener. He didn't have a bad day.

The Maryland resident caught a 9-10 limit today to slam the lid shut on his first tour-level victory. His 19-09 total was 1-10 better than anyone else could manage over the final 2 days.

Hometown favorite Clark Wendlandt, the day-1 leader, struggled for the 2nd straight day. His two-fish, 5-15 bag forced him to settle for 4th with a 13-11 total.

Here's how the lower half of the Top 10 field stood when it was over:

Eight of the 10 anglers caught limits today, compared to just four yesterday. Surprisingly, the two who didn't were Wendlandt, the two-time Tour Angler of the Year (AOY), and Lefebre, the 2006 FLW Series points champion. They were 1-2 at the cut and appeared to be the guys to beat heading into the weekend, but neither could sustain his momentum.

Hastings, meanwhile, just kept chugging right along. Today's bag was his lightest, and his best was 11-01 on day 1 (a difference of just 1-06). He never caught a fish that topped 3 pounds, although he lost a monster today.

The final-day weather was springlike – a huge change from the Arctic conditions of the first 2 days. The temperature reached the high 60s and the south wind blew at about 10 mph.

Hastings, who started the day with a 2-03 lead over Wendlandt, closed this thing out in a manner that would suggest he'd done it lots of times before. In reality, his best finish during his rookie campaign last year was 79th.

"When you get this close, you'd better know how to finish," he said. "You don't know how many times you're going to get this kind of opportunity.

His day unfolded just about like he would have scripted it. He caught a 2 1/2-pounder on his second cast and had a limit by 9:00.

The only way it could have been better is if he'd boated one he hooked under a dock this afternoon.

"With all my heart, I believe that one would have weighed close to what my other five did combined. It would have given the one Scott Martin caught (an 8-12 on day 2) a heck of a run.

"She bit in a great spot (for him to fight it), but when she came up and saw the surface, she went back down and I felt her go across a cable. After that, I could get 4 feet (of line), and then she'd take it back. It was a stalemate, and I finally had to break her off and let her go." 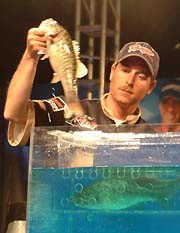 Thrift had a mediocre practice, so he had no qualms about finishing 2nd.

"I'm about as happy as I can be," he said. "The way practice went, I didn't think I was on enough fish to do this good.

He started today in a limit-spot and had three keepers by 9:00. He picked up a jig and went in search of bigger fish and caught one right away, but didn't get another bite until 12:30.

"From then until quitting time, I caught them pretty good."

He caught seven keepers for the day, and the biggest pushed 4 pounds.

Wendlandt didn't try to hide his frustration with not winning in front of his hometown fans, especially after his dreamlike day 1 (a tournament-best 17-03 bag).

"I'm pretty disappointed," he said. "If you'd told me before the week started that I'd finish 4th, I probably would have been pretty happy. But when you get this close, you want to win. You don't know if you'll get another chance on your home lake."

He might've held up the big check if he'd caught everything he hooked up with.

"I had some problems breaking fish off on both of the last 2 days, and it was nobody's fault. It was just the cover I was around. The docks I was fishing had a lot of trusses, and it's hard to get a big fish out of a truss.

"I think I had enough on to win," he added. "The two big fish yesterday would have bumped me up to 10 (pounds), and I had four today that would've weighed at least 9. It would have been really close, anyway."

He was thrilled with the reception he got from the fans.

"It was pretty amazing. I've been introduced in a lot of places, but I've never had people clap for me like that. It was humbling, and it was also a lot of fun." 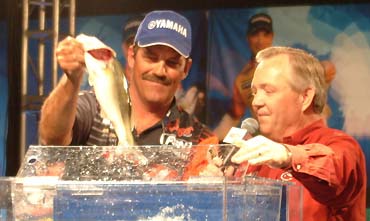 
Ron Shuffield was thrilled to pick up the 5th-place points.

5th: Shuffield Off and Running

Shuffield's main goal this year is to earn a berth in the Forrest Wood Cup at Lake Ouachita. He has to finish in the Top 40 in the AOY race, and this was a great start.

"It feels really good," he said. "I was really fortunate I caught that (7-pounder) on day 2.

"That got me into the Top 10, then after that I just stayed with what got me there. I just couldn't fish anything yesterday – my stuff was offshore, and the wind was just so bad that I couldn't get to any of it."

"I fished a deep jig trying to get a big bite, but I never got it. That was one of the things I needed, and it just didn't happen.

"But still, I'm really pleased with my finish."

Lefebre would be okay with his struggles over the final 2 days if he could identify the problem, but he wasn't sure how he went from averaging more than 13 pounds over the first 2 days to less than 6 on the last 2.

"I always try to learn something when things go wrong, but for the life of me, I can't figure out what happened here," he said. "If I had it to do over again, I'm not sure what I would change. I think I did what I needed to do and I saved fish, but it just didn't work."

He started today in a place where he thought he could catch a small limit of spotted bass in about a half-hour, but had only one keeper after an hour. Then he went back to what he'd been doing (throwing jigs in shallow water), and planned to spend the latter part of the day fishing docks.

He never made it to the docks.

"I couldn't get a limit, and I just couldn't make myself abandon those big fish that I knew were there. It was just a big mental struggle all day and I was second-guessing myself the whole time.

"The conditions seemed perfect for what I was doing, and I couldn't convince myself that it just wasn't going to happen."

One possible explanation was that the water level rose at least 4 inches today.

"If I had to guess, I'd say that's what happened. It might've gotten those pre-spawn fish as confused as I was."

> Hastings said he likely didn't burn up 10 gallons of gas in 4 days of fishing. FLW Outdoors provides the boats used by the Top 10 and fills the fuel tanks after day 3. "I guess those guys (in the boat yard) usually stick the nozzle in and walk away, but I heard when they did it on mine, the gas splashed out and hit them in the back. I might be the cheapest winner they've ever had."

>He didn't have the energy to celebrate much tonight. He planned to have dinner at Hooters, then it was off to bed.