BACK
End Of An Era 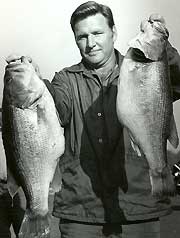 The Fishin' Hole started in 1963 as a series of fishing reports for local TV, but quickly became a full-fledged show.

(Editor's note: This is part 1 of a 2-part story about Jerry McKinnis and the final season of The Fishin' Hole.)

Hard to believe, isn't it? That a fishing show could endure for more than 4 decades. Gunsmoke lasted 20 years. Dallas went 13 years, and both Cheers and M*A*S*H did 11-year tours. But Jerry McKinnis and The Fishin' Hole have aired for an unbelievable 44 years.

It would be nearly impossible to find an angler in the United States whose heart hasn't been warmed over many times by the unassuming, feel-good fishing show McKinnis started in the early 1960s.

But all things must come to an end, and it was recently announced that The Fishin' Hole will cease production after this season. McKinnis will stay involved with fishing programming, through his company

JM Associates, but this March will mark the final time an original Fishin' Hole airs.

It also marks another step toward the inevitable time when the final "original" will disappear from the airwaves.

Virgil Ward and Harold Ensley, whose shows ended a long time ago, passed away in 2004 and 2005, respectively. That leaves just four personalities from the earliest days still on television – McKinnis, Al and Ron Lindner, and Bill Dance.

In a sport that values its roots, and traditions, the end of The Fishin' Hole gives pause – a moment to reflect on how this whole thing began, how long it took to build, and how so few people were instrumental in its early growth.

From New York To Mid-America

In the early 1960s, McKinnis was a major-league baseball prospect who read about trout fishing on Arkansas' White River. After a float trip with Ranger Boats founder Forrest Wood, he decided to give up the bat for the rod.

He became a guide and soon started to air fishing reports on a local news show, which quickly germinated into The Fishin' Hole.

From its beginning in 1963 through the late 1970s, McKinnis fought to take, then keep, the show at a national level. That was a struggle in the days before cable, because everything rested on syndication, and he had to negotiate with individual stations to carry it. 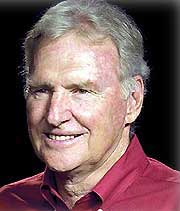 But McKinnis and The Fishin' Hole joined ESPN in 1980, shortly after the network began, and became a more permanent fixture in the national media. To this day, it's the second-longest running show on ESPN, behind only to SportsCenter.

Also noteworthy was how the show was the second to feature "down-home" fishing on the newly created reservoirs in the central U.S. That was in stark contrast to what came before – shows that featured "exotic" trips for billfish, Atlantic salmon or trout, all produced out of East Coast cities.

Ron Lindner, who started his show in 1968–69, noted: "Back in the 1960s, as far as I can recall, Virgil Ward was first, and Jerry was second. We came third. Prior to this, it was all New York, and all the big, fancy fishing. Virgil was the first one at the grassroots level, and Jerry was second.

"He wasn't the fly-tying elite. He wasn't the saltwater elite. He was a plain-old angler. He fished for smallmouths, as well as trout and crappies. And it wasn't stream trout – he showed trout being caught from spinning rods. So this took the epicenter of fishing and moved it right into the middle of the mid-section of the country."

Linder said the impact McKinnis had on fishing was "tremendous."

Bill Dance, who started Bill Dance Outdoors in 1968, actually worked as a camera man for The Fishin' Hole, which gave him the experience he needed to launch a TV career.

"I wouldn't be doing what I'm doing today if it had not been for Jerry McKinnis," Dance said. "We ran together in the early days of bass tournaments. I went with Jerry on many shoots, and he showed me how to shoot a camera. He really kick-started Bill Dance Outdoors as far as outdoors TV.

"Jerry in my opinion is an American original," Dance added. "Rarely has one man had such an impact on the industry, for young and old alike. He's entertained millions with his laid-back, Arkansas manner. He's truly an American treasure, and millions of households will miss him on the weekends, including me."

Not Just 'The Hole'

Of course, most BassFans know that McKinnis branched out from The Fishin' Hole to become arguably the most influential producer in fishing-television history.

His company, JM Associates, produced shows for FLW Outdoors at the start of the FLW Tour, which were broadcast on ESPN. The company, and McKinnis, later partnered with BASS to produce its programming, with shows that included The Bassmaster Tournament Trail, A Day on the Lake, Bass University, Bass Tech and Bass Pass, as well as ESPN-broadcasted shows like the Madfin Shark Series, Oh Boy! Oberto Redfish Cup and The Spanish Fly.

But to get back to The Fishin' Hole, and the end of an era.

BassFan sat down with McKinnis to learn more about his decision to end it. In the Q&A that follows, he talks about that thought process, along with other topics, such as how the show started, what he thinks of fishing media through the years, and more.

BassFan: Why did you decide to cease work on The Fishin' Hole?

McKinnis: The reason I'm not going to do it anymore – and it's sad, it hurts, and I don't know how to explain this exactly – but I'm done doing it. I've already done it. There's nothing more for me to do.

I feel like if I were to go out and do another four seasons, I'm doing it over again. And there are so many of these fishing shows out there, I don't want to be lumped in with them all.

I know that when the show stops airing, people are going to miss it. But it was just time for me to do something else. 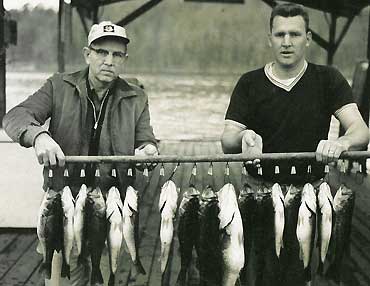 
McKinnis (pictured with his father at Lake Maumelle, Ark. in 1963) decided to make a career in fishing after a trip with Ranger founder Forrest Wood.

But it's not like I'm going to go up to my place in north Arkansas and lay back in a lawn chair and hang out. I'm so busy I can't begin to catch up, so I personally am not retiring – I'm just going to stop doing that show.

Can you talk about the origins of the show? What do you remember about the other shows around that time?

The only shows I remember were Gadabout Gaddis, and very shortly after that, maybe 2 years after, Virgil Ward got on the air. And there was another gentleman, Harold Ensley, who had a local show, just in Kansas City.

You first got started by doing fishing reports on local TV, right?

I was guiding on a little lake in Arkansas, outside Little Rock, and the local sports guy – the guy who did the sports news – was out there. I think he was on a party boat.

I caught a whole bunch of fish and had them on a stringer, and he was blown away. He said, "Bring them down to the station tonight, and let's show them off, and you can tell everybody how you caught them."

I did, and it caused a big ruckus. Then they said, "Have you ever though about doing a fishing report?" I thought it was a good idea because it would help my guiding service.

Then it just very quickly led to, "Hey, let's do a show." So I went and rented a little camera, and shot the first show. About the very next week, I went out, mortgaged the farm as they say, paid $100 for a little film camera, and away I went.

> Two legends were popular guests on the show – Ted Williams and Bobby Knight. "I personally have never had a better friend than Jerry McKinnis," Knight said. "Jerry's attention to detail was what made The Fishin' Hole tremendously successful and so well received by countless viewers for so many years."

> McKinnis was born in St. Louis, Mo., but spent most of his life in Arkansas.