BACK
Minds On The Cup 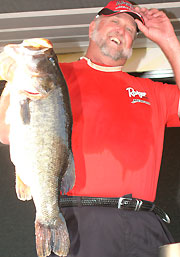 When Jack Wade switched from Bass Cat to Ranger, and BASS to FLW, he started an odyssey that could culminate in a Forrest Wood Cup berth.

The FLW Series offers its anglers a number of opportunities. Sure there's the money, and the chance to receive priority entry in the 2007 FLW Tour. But the big carrot in front of everyone's applecart is a potential berth in the 2007 Forrest Wood Cup, where the winner brings home $500,000, or $1 million if he or she fishes from a Ranger.

The Top 30 in the season-ending FLW Series points will be invited to the 2007 Cup (and the 2007 FLW Tour). Since the Series season is only five events, each event means that much more.

Two events remain, and the next one begins in 3 weeks at Lake of the Ozarks, Mo.

The FLW Series pros BassFan spoke with are all eyeing the Cup berth as the biggest prize this season. Some are thinking of nothing else as the Ozarks event approaches. A few others are trying not to outthink themselves – they'll just fish it the way they always do.

Before their thoughts, though, here's a look at the 25th- through 35th-place anglers in the current FLW Series points.

The perfect cap on Anthony Gagliardi's stellar year would be to clinch a berth in the Cup. He could add that to his AOY crown for a no-pressure season in 2007.

That "different" feeling might include some risk-taking and aggressiveness that's more difficult when points are critical. "I don't think you'd fish for points so much, unless you're involved in an AOY race.

"You really wouldn't have to concern yourself with points, so you could maybe adjust your style a little bit – take a few more risks. You could possibly give yourself the chance to have a better season as far as Top 10s go, if you did fish a little more aggressively."

A Top 30 points finish for rookie Michael Murphy might pay twice. The FLW Tour is also something that interests him, so to qualify for that, and the Cup, would be a huge accomplishment for the first-year pro. 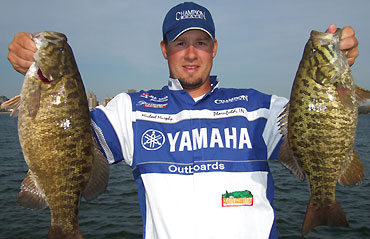 
Rookie Michael Murphy might score twice – a Cup berth and a spot on the 2007 FLW Tour.

And that's weighing heavily on his mind as Lake of the Ozarks approaches.

"I've been kind of looking at the points to see how the FLW Tour compares, and averaging out the finishes I need to have," he said. "Based on where I am, I feel I need to average 75th or better over the next two events. That could be skewed, but I feel I definitely have to do that."

He's currently employed by Shakespeare/Pflueger, and has a degree in aquatic biology. That means two things. One, his specialization in crayfish has him thinking he'll nail the Ozarks bite. Two, if he does qualify for the FLW Tour, his career might reach a crossroads.

"I'm feeling pretty confident going in, with all my crayfish research. And in fact, I won a Fishers of Men Regional in 2001 on Kentucky Lake, at almost the same time of year, fishing the same type of crayfish transition. I'm confident I can fish that same pattern.

"So I'm pretty excited. But I'm also pretty calm – I have a focus about me that's been surprising. I don't have any jitters. I'm determined to make that Top 30."

About the prospect of making the 2007 FLW Tour, he said: "I'm currently working at Shakespeare, and at this point in the game, I know I have their blessing with whatever decision I make.

"But it would definitely put my career at a crossroads. I'd like to cross that bridge when I get there, but I think that would be a good problem to have."

Millsaps Checked It Out

At 28th in the points, Jimmy Millsaps is definitely in the danger zone. And he knows it.

He's one to watch, too, considering his past FLWTC performances. He qualified three times previously and finished 4th in 2004, and 7th in 2003. He also qualified for the 2001 FLWTC, which was cancelled after 9/11.

"I just got back (from Lake of the Ozarks)," he said. "It was weighing enough on my mind that I went out and did a little prefishing.

"It's a real important tournament for me. I want to go ahead and make the championship, which will sort of free me up next year to take some chances I couldn't normally take."

Koby Kreiger's FLW Tour campaign this year wasn't memorable – he finished 122nd in the points. His 30th-place standing in the Series is therefore a bright spot, but it hasn't been close on his radar.

"To be honest, I've sort of taken the summer off – I haven't thought much about it," he said. "I just want to be consistent in the next two tournaments and make the championship before the (2007) season gets here. 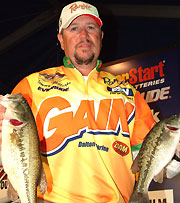 
For Jimmy Millsaps, the upcoming event is so important, he went and prefished there a few days ago.

"That would be a great accomplishment, especially for how bad a year I had on the FLW Tour."

Part of his summer off involved a trip overseas. "I've been on vacation in Germany for the last 10 days. I've taken time off, trying to get mentally back in the game. I'm trying to relax for the next couple of weeks before getting back into things."

Former BASS pro Jack Wade, who's 31st right now, is no longer with Bass Cat boats. He switched to Ranger and started over. He wants the one-two punch of a 30th in the points or better, since the FLW Tour is a major goal.

"This is a very important tournament for me," he said. "I stared this process basically 2 years ago to get back to fishing the FLW Tour (his last complete FLW Tour season was 1998). "I changed to Ranger boats and fished the BFLs to qualify for the EverStarts."

Rob Kilby fished this year's FLWTC, and seven others. He's a veteran who knows the value of a berth in next year's Cup.

"I'd like to get next year's business done today," he said. "It takes any pressure off on tying to make it during the Tour next year. Anytime you can get it done, it helps you. That way, it's not so critical if you take a few risks here or there."

And even though points are critical right now, he won't change the way he fishes at Lake of the Ozarks. "I'll just do my thing. I'll go and try to catch as many as I can, and hopefully that's more than anybody else."

> It's not exactly true that an angler who finishes in the Top 30 automatically gets to fish the 2007 FLW Tour. He or she only receives "priority entry." The FLW Tour reserves a number of slots for sponsors, and no one – except FLW Outdoors officials – knows exactly how it works.

> In that same vein, someone who finished below the 100th-place cutoff in the FLW Tour points might have a sponsor exemption, and is not in jeopardy of losing an FLW Tour spot. For example, Jimmy Millsaps finished 149th in this year's FLW Tour points, and doesn't automatically requalify. "I'm on the Gain team now, so I think I might be in, but I still would like to qualify my way in," he said.