BACK
Sounds Of Victory? 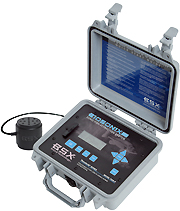 The Biosonix BSX has been on board for seven Bassmaster wins since the summer of 2005.

(Editor's note: In observance of the Labor Day holiday, a new main story won't appear until Tuesday, Sept. 5. BassFan will continue to cover breaking news. To all hardworking BassFans who have Monday off, enjoy it. Hope you catch 'em.)

Kevin VanDam has fished and hunted all his life, so he's seen a lot of gimmick products come and go, and he usually knows one when he sees it. And because he makes his living fooling fish, he's unlikely to be fooled by an invention that claims to generate more or bigger bites, but is really only designed to separate anglers from their money.

He was initially skeptical that a Biosonix BSX unit could do what it claimed – use sound to make bass believe a feeding frenzy was going on nearby, and that they'd better get over there or they'd miss out. It wasn't long before he'd changed his mind, and that process was helped along by three straight victories in the summer of 2005.

"At this point, I've seen way too much for it to be coincidental," he said. "Without a doubt, it increases the activity level of the fish and gets them excited and looking for food.

"When they hear it, they're ready to eat."

He's used his BSX in 16 tournaments now, and he's finished among the Top 10 on 11 occasions. Included are two Bassmaster Elite 50 wins and a Bassmaster Classic victory at the end of last season.

"There's no question it helped me win the Classic in Pittsburgh," he said. "Multiple times I used it to get fish busting the surface right around the boat.

"And as close as that one was, everything counted. It was definitely beneficial."

The BSX, which retails for $699, is billed as a "programmable, electronic sonic fish activator/attractor." Wes Higgins, director of PR and advertising at Biosonix, has a simpler – and much shorter – description for it that's a lot easier on the tongue: He calls it "a tackle box of sounds."

Buddy Lewis, Biosonix president, was part of the team that invented it, along with noted fish researchers Loren Hill of Oklahoma and Stephen Holt of Minnesota. Nearly 40 years ago, his father, Bill Lewis, made the first major breakthrough in activating bass via sound with the invention of the ubiquitous Rat-L-Trap lure.

In addition to the unit itself, which is housed in a rectangular, waterproof case, the BSX package consists of an underwater speaker with an adjustable float, along with a 20-foot cable and a trolling-motor mounting bracket for the speaker.

There's also a tie-down strap for securing the unit to the deck of a boat. Bow- and console-mount hardware will be available next year. 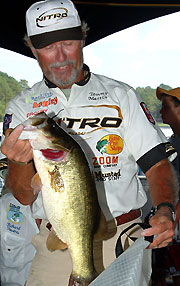 
Tommy Martin was the first pro to endorse the Biosonix BSX. "It's not a fish call, and it won't do magic or perform wonders."

Texas veteran Tommy Martin was the first pro to put BSX to the test in June 2004.

"I was real skeptical up to the point that I tried it, but I've been using it continuously since then," he said. "I used it for 6 months before I agreed to endorse it.

"It's just actual reproductions of the sounds of shad and bass feeding on shad, and when they're played, it's a hint to the bass' natural instincts. They could be hiding in brushpiles, but when they hear other fish feeding, they're going to instinctively start looking for food themselves."

He was quick to caution that the unit will rarely – if ever – mean the difference between a skunk and a limit. But at the end of the day, it could be a big factor in the size of a competent operator's stringer.

"It's not a fish call, and it won't do magic or perform wonders. For a good fisherman, it might mean two or three or four more fish in a day, if he can get around them."

The BSX got its first big wave of publicity after VanDam won the ultra-tough '05 Classic. He and Stacey King were the only anglers using it at the event, and they tied for big bass of the tournament (2-14).

About a month and a half later, Aaron Martens (the runner-up in Pittsburgh) used a BSX for the first time at the U.S. Open at Nevada's Lake Mead. He won by more than 7 pounds.

In an effort to level the playing field for all competitors, BASS disallowed the BSX at the '06 Classic at Florida's Lake Toho on the premise that not all anglers had access to the units. There are no restrictions on their use in the Bassmaster Elite Series, however, and anglers employing them have compiled a hefty share of the wins and high placements.

Higgins said to his knowledge, there are 15 Elite Series competitors using BSX units (he said there may be more, but some are reluctant to talk about it because they're not being paid by the company). Three of those are pro staff members VanDam (No. 1 in the BassFan World Rankings), Martens (5th in the Angler of the Year (AOY) race) and Ken Cook (three Top 10s in '06).

Those who've won tournaments this year with a BSX unit on board but are not on the pro staff are Mike Iaconelli (AOY leader and winner at Guntersville), Ish Monroe (Amistad), Peter Thliveros (American Major at Eagle Mountain Lake) and Kelly Jordon (Potomac River).

With six signature sounds (and more on the way), 25 volume settings and the ability to set the unit to play specific sounds at selected intervals, the options available to the BSX user are numerous.

Higgins said some anglers like to "prime" a piece of water with, say, 30 seconds of a subtle sound like shad clicks, followed by 30 seconds of the more-intense shad active. After that, they might throw in a 30-second pause so that the fish don't become conditioned to the sounds.

An angler's fishing style will go a long way in determining how he uses the BSX. For instance, a power-fisherman like VanDam, who's constantly on the move, might use shad active with frequent pause periods, whereas a more methodical angler like Martens might opt for less-frenetic sounds (such as shiner feed) deeper in the water column, and play them at longer intervals. 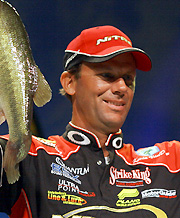 
Kevin VanDam is still experimenting with the BSX, but he harbors no doubts about its effectiveness.

"It's not like you can just turn it on and bass will come from miles around to chew any lure," VanDam said. "You have to understand how to use it, and it works much like a depthfinder.

"The biggest thing for me is to try to use it to match the conditions. A lot of people think if a little bit is good, then a lot is better, and that isn't the way it works. If you use a loud, aggressive pattern in tough, post-frontal conditions when the fish are neutral or negative, it's not going to do you any good.

"The sounds I'm going to use have a lot to do with the type of lake and type of forage," he added. "I'm still learning too, and I'm still experimenting some. But I know from my experiences in hunting that overly aggressive calling can be real detrimental in a lot of cases."

VanDam and Martens agreed that the BSX is most effective when high concentrations of baitfish are present.

"When the bass are schooling, it definitely helps," Martens said. "It keeps them going longer and it brings them to the top more frequently."

Jury Still Out on Spawners

At this point, neither VanDam nor Martens likes the BSX for bed-fishing applications. Both feel that it might make fish that are already stressed even more edgy, and thus harder to catch.

Monroe, who's not on Biosonix's payroll, has a different opinion.

"I use it for bed-fishing – it seems to me like the fish become more active," he said. "I tried not to use it to see if it made a difference. Then when I turned it on, they started flaring their gills and opening their mouths and doing all the stuff I wanted them to do."

He has anecdotal evidence from spawner-dominated Santee Cooper to back up his theory.

"It's the deal, man. Anybody who doesn't have it needs to get it."

> Martin believes the unit's effective range is about 400 feet laterally and about 100 feet vertically. "Of course, there's no way we can prove that, but I've seen many instances where fish started schooling way out in different directions from the boat."

> A BASS communications official said this week that the BSX will be banned at the 2007 Classic in Birmingham, Ala., but will be allowed on the '07 Elite Series. Requests for comment from FLW Outdoors regarding its use in FLW Tour and Series events have gone unfulfilled.

> VanDam mounts his speaker on the trolling motor when fishing open water and lets it float if there's thick grass around. He rests the unit on the floor of his boat underneath the console. Higgins said that's a common location, but some anglers will place it inside a rod locker.

> Martens said he's begun working with the company on some sound signatures more suitable to fishing thick grass – "crawdads and stuff like that."

> Martin and King, neither of whom is fishing the Elite Series, round out the five-member Biosonix pro staff. "We'd like to have more, but we're a new company and we can't afford to do too much right now," Higgins said.