Champlain Still Fruitful, But Bite's A Little Off 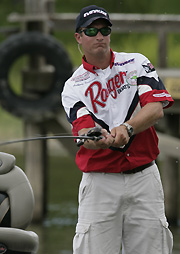 Anthony Gagliardi can nail down the Angler of the Year title by finishing 35th or better.

This isn't your father's Lake Champlain.

The renowned smallmouth factory on the New York/Vermont border will host the final stop on the FLW Tour this week. The Angler of the Year (AOY) will be determined and berths in August's FLW Tour Championship (FLWTC) will be secured – or lost.

As always, thousands of fish will be caught each day by the 200-angler field. But some pros are convinced that, in terms of fishing quality, the 100-mile-long lake isn't what it used to be.

Champlain's reputation has spread far and wide during recent years. There hasn't been a tour event conducted here since 2004, but there are dozens of lower-level tournaments held from late spring through early fall.

Perhaps all the pressure has taken its natural toll and made the better fish harder to catch. Moreover, the region has experienced a cooler-than-normal spring with heavy precipitation, and the lake is 5 feet above normal pool. That gives wary fish more places to hide.

"I probably caught 30 fish today (in practice), and I think I had one over 3 pounds."

Before getting into more information about the bite, here's more about the lake itself.

Tournaments at Champlain force anglers to make a lot of decisions, and this year is no different. There are both smallmouths and largemouths in all three phases of the spawn. The largemouth tend to run a little bigger, but there are fewer of them and they usually require a longer run. That can be risky – if not downright impossible – when the wind blows.

Sight-fishing could be a big factor if the weather permits it. Some anglers will do it, some are considering it and others have dismissed it.

Just about everybody will catch a double-digit limit each day. One or two fish a day that top 3 pounds could get a guy into a photo with an oversized six-figure check come Saturday.

"This isn't like a lot of places we go, where there's just a couple of things working," said Florida's Randy Blaukat, who finished 4th here in 2004. "There are a lot of options. You could make the Top 10 with 20 different techniques.

"It's typical Champlain – so much hinges on what the weather's doing that particular day, or even that particular hour. You can get into an area with a lot of fish and you'll be catching them on a tube or something, and then all of a sudden the conditions change and (the fish) won't touch it.

"You've got to make adjustments. The winner will be the guy who does the best job of adapting each day."

The above-normal water has flooded a lot of trees that are normally high and dry on the bank. Largemouth love that type of structure, but they also have numerous other options to choose from.

"When I won here, the water was up in the bushes, but not this high," Newby said. "There are so many marshes that usually have 6 inches of water in them that have 2 1/2 feet now, and the fish can get in there and go forever and ever.

"Back then, the first bushes you came to were the only ones deep enough to hold fish. Now you can see back into places where they could get to, but you can't get to them."

Alabama's Matt Herren, one of the AOY contenders, found some cooperative fish during practice.

"I'm keying on all post-spawn fish, and I'm on a pretty good bite," he said. "But the fish are scattered. Normally, they're packed tight.

"I don't know if it's the cold spell or the high water or what, but they're just not bunched up."

He said there's a chance the tournament could be won predominantly with largemouths, but it's not likely.

"The dominant fish in this lake are smallmouth," he said. "Whoever gets on the right size bite on smallmouths is going to be the guy who's tough to beat." 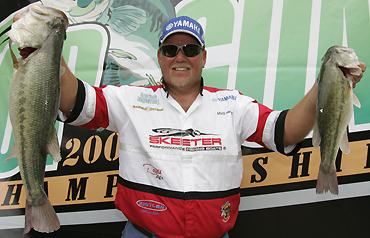 
Angler of the Year contender Matt Herren said he had a solid practice.

South Carolina's Anthony Gagliardi goes into the event with a 35-point lead, so he can secure the title by finishing 35th or better. He's ended up in the 80s in both of his previous Champlain appearances.

Arkansas' Ray Scheide, in 5th, trails Gagliardi by 68 points. With three anglers between him and the leader, his AOY chances are extremely slim no matter what Gagliardi does.

"I've got a couple of things going, so if something doesn't work, I have something else to fall back on. I might sight-fish a little, but the fish I found today are running considerably bigger than the sight-fish."

In no particular order, here are BassFan's picks for the Top 10 to watch in this event.

1) Scott Martin – He finished 4th here in 2002 and won 2 years later, and it's real difficult to pick against that kind of record. He sight-fished for his winning bags in '04, and should have the opportunity to do it again.

2) David Walker – He's finished among the Top 11 his last three times out, and needs to move up 13 spots in the standings to gain an FLWTC berth. He'll get 'er done.

3) Anthony Gagliardi – Doesn't have a great record here, but attributes most of that to breaks that didn't go his way. He's been incredibly consistent all season, and nailing down the AOY would enhance his rising status.

5) Ish Monroe – There are fish on the beds here, so the Californian is back in his element. Started the year with a bang on both this circuit and the Bassmaster Elite Series, but hasn't done much recently. Time to get back on track.

6) Luke Clausen – He's out of his post-Bassmaster Classic funk and fishing extremely well again. Another guy who needs a solid finish to make the FLWTC (he's 62nd in the points).

7) Jim Moynagh – He wants to win AOY real bad and is set to make a serious run at it. He finished 3rd here in '02 and admittedly has had a lot of things go his way this year. If his luck holds out, he could achieve his goal.

8) Jay Yelas – An excellent sight-fisherman with a good track record here. He found some hefty spawners in practice, so look for him to get off to a strong start.

10) Matt Herren – He's sizzling, and he says he won't let the AOY standings affect the way he fishes. Considering his devil-may-care demeanor, you have to believe him. He's as likely as anybody to track down the big largemouth.

The free Family Fun Zone, located outside the weigh-in tent in the Wal-Mart parking lot, will open at 2 p.m. Friday and Saturday.

Here's the Weather Channel forecast for the tournament days. Note the strong winds, which could hinder angler movement, predicted for Thursday.

> Here's Blaukat's overall assessment of the lake: "Everything's relative and it's still one of the best around, but it's not the lake it was 10 years ago. There's been so many tournaments and people have gotten so educated about the humps and whatnot. Instead of catching 50 keepers a day, now if you get nine or 10 nice keepers, you've had a good day. It's starting to show the effects of the heavy pressure."

> Newby said there have been rumors of a hot largemouth bite at Ticonderoga (the southern part of the lake). "The word's out on it, so there might be a lot of guys going down there."