BACK
His Time This Time 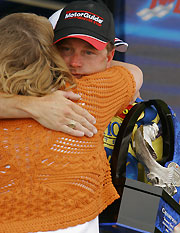 Mike McClelland said it all happened so quickly, everything still feels 'surreal.'

Back-to-back Bassmaster Invitational wins in 1996 seemed to signal that Arkansas' Mike McClelland was a big-time player - a future star of the sport. But it would be a long 9 years before he won again – at the 2005 Bassmaster Open Championship.

And in-between was a 2-year partial hiatus from fishing – a time to collect himself after he lost his ex-wife and daughter to a tragic car accident in 2001.

Today at the Grand Lake Bassmaster Elite Series in Oklahoma, McClelland took any doubt that he belonged here, rolled it in gas-soaked tissue paper, hung it from the tallest tree he could find and set it ablaze with the fire that had burned inside him for so long.

He absolutely smoked the entire field and won by a staggering 15-09 margin.

He led every day of the event and never looked back.

Sun, wind, clouds, lightning, a posse of 30 spectator boats – nothing shook him, or his rock-solid bite.

He worked slow but fast – felt his jig through unimaginable tangles of cover – and weighed a mind-blowing 25 pounds on day 2, which was 7 pounds heavier than the second-best sack that day.

Greg Gutierrez had the best bag today (14-11) and retained his 3rd-place standing.

Here's how the rest of the Top 12 finished:

The sunny, calm conditions of previous days gave way to clouds and wind today, with periods of intense thunderstorms that pushed anglers to find refuge.

Didn't bother McClelland though. In fact, if he'd sat in his boat and read all day, he still would have won – his day 3 weight was a pound better than Reed's final total.

"In all honesty, it's a little bit surreal right now," McClelland said shortly after his win. "It all went so smoothly, and happened so quick – it's just an unbelievable feeling.

"It's hard to explain. It's far better than winning the Open Championship – the feeling of accomplishment is just much more. Even though I'm competing against the same guys, there's more notoriety to one of these." 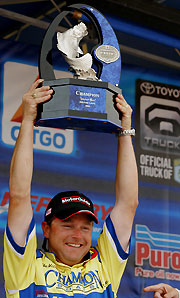 
McClelland wasn't disappointed he missed the cut 2 weeks ago – he wanted to save his luck for here.

He had the feeling all week that this was his tournament. But that feeling started a few weeks earlier, when he missed the Top 6 cut at the Bassmaster Memorial Major.

"When I missed the final-day cut, everybody asked why I wasn't upset. I said I didn't want to burn my luck there. I wanted to win Grand.

"I came here with nothing in mind but catching enough fish to win."

He's atop a mountain right now. Yes, other peaks are visible in the distance – like Angler of the Year (AOY) or a Classic win – but for now, he likes this peak.

"For a while, I always felt like I'd kind of started climbing this mountain by winning back-to-back Invitationals," he said.

"But taking a couple of years off made me realize how much I had to do to get back in this game like I needed to be. I hope this solidifies things for me. And I think my longevity in the sport should be apparent by the fact that I fished my first BASS event in 1988.

"I'm not one of these guys that has come and gone."

His winning baits were a Zoom Brush Hog and the new Jewel Heavy Cover Finesse jig.

Details of his winning pattern, and pattern information for the other top finishers, will be posted soon.

Like McClelland, Reed also made the Top 12 cut at the Memorial, but not the Top 6. This event marks Reed's third Top 12 of the year, and he's now 19th in the Elite Series Angler of the Year (AOY) race.

"I'm happy with where I finished," he said. "It would have taken a miracle to catch him.

"I've never won one of these, but I'm tickled to be 2nd. Realistically, that's all I had in my sights today."

His day was largely a struggle. He'd been sharing an area with Paul Elias, and Ken Cook was within sight. At 2:00 today he only had two fish.

"That was a long while," he said. "I was having issues. I couldn't figure out how to catch one.

"I think the spot was just burned. Those fish were there 2 out of 4 days, and when they're there, you can just blast them." 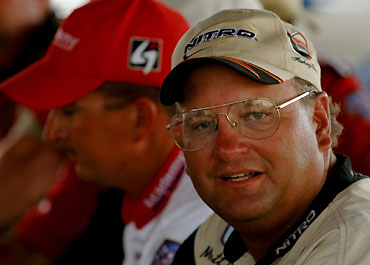 
Matt Reed said his spot was burned, but he did catch his limit nearby today.

He left the spot, then came back later in the day and worked it. He got to the end of the rockpile, fired one cast as far as he could and found a new rockpile.

"It was about the size of my boat, and I caught four in about 10 minutes."

"I feel good about it," he said. "I went into this tournament kind of struggling, and I ended up kind of falling into a little deal.

"I was lucky to have what I had. I took what was presented to me and parlayed it into some good decisions.

"But I am a little disappointed. I lost some key fish here and there."

Edwin Evers, an Oklahoman, was onstage in front of about 30 family members today. He put a lot of pressure on himself before the event began, and finished with a Top 5.

"I'm happy," he said. "I had a good tournament – you can't complain about a 4th-place finish.

"I'm really happy, in fact, to be here in Oklahoma and have a Top 12. That probably means more to me than anything. I've never had so much family at a weigh-in in my life. It meant a lot to me. 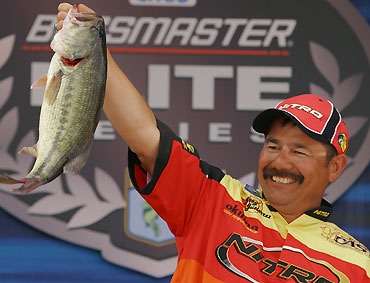 
Greg Gutierrez is happy, but a little disappointed – he had the bites to catch Reed.

He also lost some big bites that could have moved him up, including a 5-pounder he had at the boat today. But the high finish moved him up to 16th in the points, and he's currently ranked No. 4 in the BassFan World Rankings.

Another reason to be happy: His best friend and travel partner, Reed, also finished in the Top 5.

Given that Rojas squeaked into the cut in 12th yesterday with just four fish, he considered today an opportunity to gather some key AOY points.

He got that when he moved up from 12th to finish 5th. He's now 2nd in the AOY race – 54 points behind Mike Iaconelli.

"I feel great," Rojas said. "I feel like I took advantage of a situation that I had – being in 12th and moving on up. I feel good about it."

"It's the combination of a lot of things – the time of year we're fishing, the lakes we're going to, the techniques I'm very good at. Those techniques just happen to be going while we're at the lake.

"It's a matter of finding the right groups of fish with the highest concentrations that can put you in a position to win. I'm just trying to be consistent right now."

He's clear about one thing, though – the Top 12 may be nice, but there's other accomplishments that matter a heck of a lot more.

"My career – it's more like a mound than a peak right now," he noted. "The peak is when you win something like the Classic or an AOY title. I haven't reached that yet.

"Obviously, I'm going on an incline right now. Nothing would make me more happy than continuing to do what I'm doing and fishing well."

> He sought refuge under a dock today during the lightning storm.

This was Elias' first Top 12 finish since March 2004 (Table Rock Bassmaster). He's an offshore specialist – so he's stoked about the upcoming schedule – but even with his finish here, he's only 58th in the points.

In other words, he has to stay hot through the rest of the year to penetrate the Top 36 and make the Classic.

"The wind kind of got me today. It blew pretty good, and I was out in the open trying to fish little old light stuff. It just didn't go very well."

He did get a stroke of good fortune with lightning today. When the storm hit, he took refuge under a bridge.

"That big lightning storm came up and I said, 'Well, this is stupid.' I only had one fish, and said, 'Let's go get under this bridge, it isn't worth it.'

"I ran under the bridge and caught four fish. That finished my limit out. I hadn't fished there all tournament."

He threw a Mann's HardNose Finesse worm and a 1/4-ounce Mann's Stone jig, plus some mixed stuff on a Carolina-rig. "Those HardNose (products) really hold up well, and you get a good hookset," he noted. "And that little Finesse worm has a lot of action. A lot of guys are throwing it and not talking about it."

7th: Connella Okay With It

Rookie Jeff Connella fished near Rojas, but didn't throw a frog. He flipped. And whereas the clouds helped Rojas, they hurt Connella.

"I just didn't have the quality bites today," he said. "And I lost one fish. But I'm okay with it.

"I was glad to have what I had (8-10), because I knew I'd be struggling when the sun wasn't out. I need the sun to put those fish in the willows. When it's cloudy and rainy, those fish roam a little more, and I had trouble catching them."

His finish moved him up to 56th in the AOY race.

"I'm disappointed, but happy I made the cut," he said. "I wish I could have caught some big ones and moved up more, buy hey, you can't make them be big."

He agreed with Reed and Elias – the general area they shared was burned. "I think we just caught those fish. I caught three little keepers early, then scrambled and caught a couple limits – just no big ones.

"They didn't pull any water today, and I think that makes the big fish lethargic, and doesn't position them on structure to where they'll bite.

The finish moved him up from 79th to 61st in the points. "That's a start," he said. "If I keep moving up I can make it to the Classic by the time the season's over. I just need to catch them at every tournament from now on.

"And I need a money finish the rest of the year to make it. And I need the money."

> Rojas and Jami Fralick were the only anglers in the Top 12 who didn't weigh a limit each day. They both weighed 19 fish.

> Connella was a bag short today, but the bottom of his bait locker saved him. He was flipping a green-pumpkin V&M Chop Stick (a Senko-style bait). "I ran out of them, and quit getting bit," he said. "I got to looking for some other colors, then found another pack. As soon as I put one on, I immediately started getting bit. I didn't realize color on the north end was that critical – it wasn't on the south end."

> A good mix of boat companies was represented in the Top 12. McClelland runs a Champion. Reed, Gutierrez and Evers run Nitros. Rojas runs a Skeeter. Elias, Connella, Cook and Aaron Martens run Tritons. Chad Brauer and Jami Fralick run Rangers. So does Iaconelli, but not as a sponsored boat. He lost his Ranger sponsorship earlier this year.