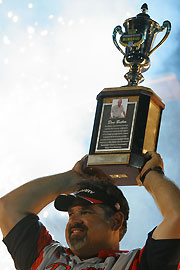 Peter Thliveros said this win is "very special" – it was the first-ever Major, and he fished from his own boat all 4 days.

In the 24 years that Peter Thliveros has been a tour-level angler, he'd accomplished a lot: four BASS wins, 35 BASS Top 10s, 10 Bassmaster Classic appearances and an FLW Angler of the Year (AOY) title. He'd won over $900,000 in BASS competition alone and was a household name among those who follow the sport.

But there remained unfinished business, and today at the Bassmaster Memorial Major in Texas,

he reached one important milestone – he became one of only 15 anglers to ever surpass the $1 million mark in career BASS earnings.

He carried a thin 1-05 advantage into today's competition – which took place at Lake Benbrook (near Ft. Worth). There was every opportunity to lose it, but he won in lunchbucket fashion. No head-turning toads, no dramatic dances – just solid fishing from a consummate veteran.

He simply drove out on the lake and took whatever it would give him.

And his whole tournament hinged on a key move he made in the final hours of practice that revealed the winning pattern.

Two anglers weighed more than Thliveros today, but his 10-05 was good enough by more than 3 pounds. He finished with 25-08 total.

This was his second win in as many seasons – his last victory was at the 2005 Harris Chain Bassmaster – and he proved that he's still one of most dangerous anglers in the sport today.

Mark Menendez began the day in 2nd and was the angler with the best shot at catching Thliveros. But Menendez caught one fish and finished 4th with 17-14.

"I'm pretty relieved more than anything else. At the middle part of the day, I felt like I'd blown an opportunity to walk away with a win. As it turned out, I was right where I needed to be at the right time to catch a couple of fish in holes where I wasn't expecting to catch anything.

"That just kind of kept me out there."

He still didn't think he had the weight to win. "By the end of the day, I was really feeling kind of dejected. I wasn't feeling bad – the tournament was finished and I was pleased with being in the Top 6. And I wasn't overly disappointed knowing in my heart that I hadn't won.

"As it turned out, as we got back to the boat ramp, from what I was hearing from everybody, I had enough to win." 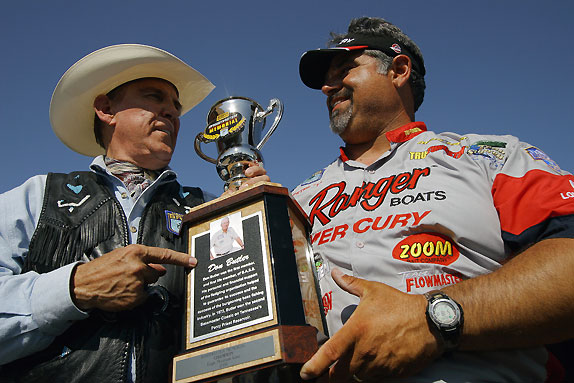 He actually dreamed last week that he was going to win a BASS event. "The dream was very lifelike, but I didn't think much about it afterwards. When I pulled into the arena and realized Edwin Evers had done well - as he had in my dream – I choked up."

He only missed one fish today, but he's not even sure it was a hit. And his dam bite – the pattern that had carried him for 3 full days – fizzled this morning.

"Fortunately, in hole No. 2, I caught two, and I felt like I still had a shot at a limit. The bite was slow, so I had to slow down and fish methodically."

Among his wins, he said this one was "very special, because of it being the first Major ever held, and for the fact that we were able to use our own boats and promote our sponsors. (Thliveros is a Ranger pro, but during regular-season events, anglers fish from BASS-supplied Tritons during days 3 and 4 of competition. – Ed.)

"That's created a tremendous amount of forward movement for the sport," he added. "It was an outstanding opportunity for everybody involved in it."

It's also by far his biggest payday ever. But he said the win wasn't about the $250,000 1st-place money. "It's about the pride. It's about the sport. The money is just a byproduct of everything that revolves around the sport.

"Being successful is more important to me, and I'm proud to be at the top of the list I was ahead of this week. This was a tremendous group of accomplished anglers.

"It's a wonderful feeling to know, this week, you were the No. 1 guy."

The key to his victory was a deep-water pattern – he threw a Team Supreme Ultimate Rattling Rascal and Team Supreme finesse jig to riprap around the dam on both lakes. Details of his winning pattern – and pattern information for the other top finishers – will be posted soon.

Iaconelli pulled off a massive comeback on day 2 and moved up 19 places to lead the cut. He was about 4 pounds behind Thliveros this morning, but could only shave that margin by a pound. 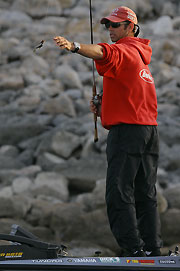 
Mike Iaconelli's happy with his finish and wants to keep the momentum going.

"I'm pretty happy about it," Iaconelli said of his finish. "I'm pretty stoked. At the beginning of this season, I just wanted to be consistent and keep my performance up.

"So I'm happy. I came in and made another cut, and had a shot. I'm happy with my week."

He excelled last year in the six-hole course format – where anglers fish 70 minutes in each of six pre-determined holes. But he noted this was the toughest course he's ever fished.

"It was grueling, and mentally challenging. I only had 10 bites both days. Today I did lose one that cost me some weight, but it wouldn't have put me over the top. So I have no regrets, and I just want to keep the momentum going for (the next Elite Series event at) Grand Lake."

Evers was today's biggest climber. After a dismal 7-pound day 3, he caught the day's best sack (13-01) and moved up three spots to finish 3rd.

"I'm happy," he said. "I fished good today. It felt good to finish well, and I didn't lose any that would have cost me.

"So I'm happy with my finish. I would have liked to have won, but I didn't have the bites to win it."

His first four holes were dry today – he didn't catch a fish – but things started to happen in his final two holes. 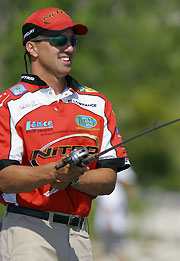 "I fished deep all day long and finally just found a little pod of them right at the end. I caught four in hole 1, and my biggest one in hole 2."

About his experience at the first-ever Major, he said: "It was cool, but the best thing ever was to be able to fish out of our own boats. I can't stress that enough. It's great not to have to change tackle, and be comfortable in something you're comfortable in.

"I just can't say enough (about) how cool it was to use my own Nitro. It's just a huge, huge deal."

Mark Menendez started the day within 1 1/2 pounds of Thliveros. He caught one fish today (4-00) and finished 4th.

He contracted viral meningitis last year and missed the majority of the Bassmaster Tour season. BASS granted him a medical exemption and recalculated his AOY standing using previous years' standings. After the recalculation, he qualified for the Memorial.

BassFan attempted to reach him numerous times, but calls were not returned. He did tell BASS: "I'm fortunate just to be standing here. I realize that every day. I'm fortunate to have a beautiful wife and two beautiful children so fishing has now become secondary in my life.

"It's my vocation and I want to do well, but it just doesn't have the same importance it once did.

"The illness just made me realize there are more important things in life than catching a bass," he added. "But I'm not belittling what we do for a living. I felt a tremendous amount of pressure to make the Bassmaster Classic and make the finances to continue the fishing machine, so to speak."

Reese started the day within 4 1/2 pounds of Thliveros, but only weighed two fish today and slipped one spot to finish 5th.

"I just went fishing today. I didn't feel any pressure. I enjoyed my day on the water and had fun. I just didn't get the bites today. It's a pretty fickle little lake."

He started on hole 6, which meant he'd fish his best three holes first. "I don't know if my hole selection was right," he said. "I was trailing Ike and he and I were keyed on some of the same stuff. He raped and pillaged before me the whole day.

"I did fish the jig a little more today, hoping to get some bigger bites. It didn't materialize."

He's a Champion pro, and said this about fishing from his own boat: "It's been incredible. But in the first hole yesterday, I wound up having the lead from a battery charger having a blown fuse, but I didn't know it. I was out of power and the trolling motor wouldn't work.

"BASS had to bring me a boat, which I was thankful they had. But being able to use our own boat and get the airtime these six guys got – and on the final day of competition coming through the coliseum being towed in our boats – I thought it was pretty huge for our sport."

Greg Hackney started the day in 5th and slipped one spot to finish 6th.

"I'm disappointed," he said. "I'm always disappointed when I don't win, but it was one of those deals – I just never figured it out. It seemed like I kept moving in the wrong direction.

"It's still tough for me to believe, mentally, that there wasn't fish where I wasn't getting them to bite."

He noted he's typically strong in a hole-course format – he likes fishing from the hip. "Normally I do much better than I did this time. I can normally dial them in pretty quick. But that lake (Benbrook) really had my number. I never could get it going."

About his Major experience, he said: "It was an awesome deal. The attitude completely changes with the fishermen. Everybody's so laid back. And it doesn't bother me fishing out of cut boats – they're all set up exactly like mine. What bothers me is I'm lazy. I don't feel like getting my tackle and stuff out at 8:00 at night. So that was great."

> Thliveros' prior win at the Harris Chain was his first in 9 years. So far this season, he's made four of the five Top 50 Elite Series cuts, and he made the Top 12 cut at the most recent event (Clarks Hill).

> Along with Thliveros, Iaconelli also moved past the $1 million mark in career BASS earnings with his finish here.

> Today marked the first time a BASS event other than the Bassmaster Classic received same-day coverage on ESPN2. The day 4 weigh-in, plus other action, was broadcast on ESPN2 at 7:00 p.m. EST.