Kenyon Hill stuck with topwater, even during slow times.

Davy Hite won the recent Clarks Hill Bassmaster Elite Series with a brown jig and shad-pattern swimbait. Here's a look at how the rest of the Top 5 finishers caught their fish.

Kenyon Hill never could follow up on his strong day 1. Like almost everybody else, he gambled on topwater fish. Sometimes he caught 'em, sometimes he didn't.

"I was really keying on little flat points that the blueback herring were coming up and spawning on," he said. "I was running about 15 points a day. It was just a milk run. I'd make eight or 10 casts on each, and I just rotated through them.

"It was just a matter of when they were going to eat," he added. "Through the course of day, you were eventually going to land on them when the herring were up there and they were biting. You just had to be patient with them and keep rotating."

> Main factor in his success – "Just being patient with the pattern and knowing how the big ones were biting. I knew they were going to bite a topwater for me, so I stuck with it, even in slow times." 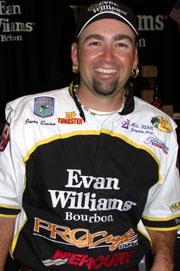 
Jason Quinn fished a mix of topwaters and jigs.

Jason Quinn was another topwater guy, but he also threw a jig during the down-times.

"I was running a blueback-spawning pattern," he said. "They were spawning on main-lake shoals, and I was throwing a Cotton Cordell Pencil Popper. When I couldn't get the fish to come up, I used a brown 1/2-ounce Tru-Tungsten jig.

Like winner Hite, he noted a big, brown jig is a local secret during the blueback spawn. "When you throw that jig, if there's good ones there ready to eat, that's the way to catch them.

"In practice, they held onto the jig extremely well. On (day 4), I only weighed two on the jig. I think with the changing weather they just didn't hold onto it as well."

He also weighed "one or two fish" on a Gambler Super Stud soft jerkbait.

> He noted the key to fishing the Super Stud was to "reel it extremely fast – so fast that the bait hardly ever touches the water. It skips across it. There was no way you could fish it too fast to catch a bass."

> Main factor in his success – "Moving around a lot, but instead of just running to different spots, running a pattern. Prior knowledge helped because I knew where to look for the same type of stuff. And I had faith knowing I could catch a limit about anywhere I went."

> He recently added Stearns life vests as a new sponsor. 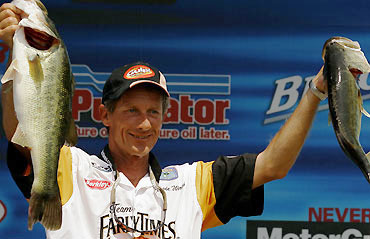 
Kevin Wirth said one of the main factors in his success was luck.

Kevin Wirth's pattern was a lot like Quinn's, except he used a Carolina-rig for down-fish.

"I caught 80% of my fish on a Super Spook topwater, then the rest when they were down on a Carolina rig with a 1-ounce weight and Gulp! Sinking Minnow.

"I was running points pretty much on the main body of water, but I'd go back in some pockets a little bit," he added. "They needed to be extended points that came out with a little hook or turn on them, and the tops could be no deeper than 3 feet."

> He said the key to the Spook's color was its belly. "It had so many colors in it, but the bottom's white, and I think that's all that matters – the bottom."

> Main factor in his success – "Timing, and getting some lucky breaks. Lots of guys won't admit it when they do, but I got darn lucky." 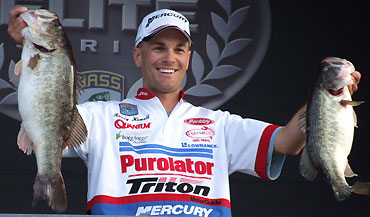 
Randy Howell fished a Quantum Burner super-high-speed reel so he could get the bait back quicker for another long cast.

Randy Howell threw a Pencil Popper on points, but it wasn't until day 3 that he got his timing down.

"That was the whole key – timing," he said. "I'd run-and-gun about 20 points and flats and shoals, chasing fish that were pretty much schooled up."

He didn't work down-fish. Instead, he waited for bass to crash the surface. "The only way you could catch big bass was if you stood there not casting, waiting until the big fish ran herring. And you had to throw a 50- to 65-yard cast to breaking fish.

"It was so hard to get the right cast every time. But you could throw that Pencil Popper a mile, and I fished a Quantum Burner reel with a 7:1 gear ratio. That was key because you had to get your bait back in quick for another cast before the fish went down."

> He swapped out the stock front treble for a No. 1 Daiichi Bleeding Bait treble. He placed a large black treble on the back (make unknown). He prefers the red treble up front because he thinks it directs strikes toward the head of the bait, rather than the tail.

> He spooled with braid because he could generate a strong hookset even on a long cast.

> Main factor in his success – "The last 2 days it was timing. And also having the right setup to catch the bigger fish. You had to be dead-on with your casts. If you were off just a little, they wouldn't come and get it."