BACK
Shin Does It Again 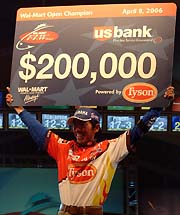 Shinich Fukae caught the heaviest sack for the second day in a row and won the Wal-Mart Open (Beaver FLW) by 2-14.

Shinichi Fukae became just the third angler to achieve multiple FLW Tour victories in the same season today as he caught 9-13 to win the Wal-Mart Open (Beaver FLW) in Rogers, Ark. with a 2-day total of 21-00.

The Texas resident and Osaka, Japan native caught the heaviest bag for the second straight day and joined the legendary Rick Clunn and David Fritts as the only anglers to win more than once in a year. Clunn had two victories in 2000 and Fritts won three times in 1997.

Here's the bottom half of the Top 10 field:

The wind died down today and eight anglers caught limits, but the post-frontal conditions had shut down the bigger fish. The other contenders knew they'd need a bag that approached the teens to overtake the ultra-consistent Fukae, and that type of stringer was nowhere to be found.

Still, there were some major highlights for the also-rans. Robertson took over the points lead, Rose's $100,000 payday was nearly four times as much as his largest previous check, Thomas' finish was his best ever on the tour and Kreiger, who was 6th in the points last year, finished better than 100th for the first time in 2006.

Fukae, who also won the season opener at Okeechobee, speaks very limited English, but he was able to come up with several superlatives to describe how he felt in the aftermath of a victory that was worth $200,000 (double the normal amount).

Then, with translation help from friend Kazuki Kitajima, he explained why this victory was more significant than the one at Okeechobee 2 months ago. "The money is twice as much as last time."

He used finesse worms to catch all of his weigh-in fish over the 4 days from standing timber. He caught 13 keepers today, and his bag was anchored by a 2-11 largemouth.

He said he didn't know the victory would be his until Rose had weighed in his final fish, but he would have won even if he'd been one shy of a limit.

He was asked if he'd ever dreamed about such a big payday. "Every day I dreamed about it," he said. "And nowadays, I've started dreaming in English."

Details of his winning pattern, and those of the 2nd- through 5th-place finishers, will be posted soon. 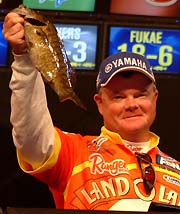 
Mark Rose's 2nd-place finish will serve as a confidence-booster.

Rose came into the tournament 69th in the points, and his primary goal was to lower that number. He did that, and then some.

"It just feels really good," he said. "The last couple of years haven't been a blaze of glory and it feels good to get back in a solid frame of mind again.

"I don't expect to have a huge streak of Top 10s or anything like that, but you always want to solidify that you can catch a bass and that you can compete against some of the top anglers in the country."

He started the day just a pound and a half out of the lead, but never really considered himself a threat to win.

"I knew Shinichi was an expert at finesse fishing, and that's what I was doing too," he said. "There was a slight chance if I'd caught a 14-pound bag like I did the first day, but with the post-frontal conditions and the clear sky, I knew it wasn't going to be like the first day."

He fished his first FLW Tour event at Beaver 7 years ago, and this finish marked a milestone of sorts in his progress since then.

"I grew up fishing for largemouths and not knowing anything about smallmouths or spots or any of that," he said. "In that sense, I feel like I've almost come full-circle with this tournament."

Powers knew he needed a double-digit sack to have a chance to win and fished accordingly, but didn't get the right bites.

"I can't say I'm satisfied, but it's hard to come to a lake like this and catch fish on topwater for 4 days in a row," he said. "I knew I wasn't going to beat Shin by catching spots. My only chance was to go for largemouth, and it just didn't happen."

He caught a small limit fairly early today and thinks he could have finished 2nd had he stayed in that area, but that would have eliminated even the slimmest possibility of victory.

"I knew I needed 10 or 12 pounds to even have a chance," he said. "I caught a couple of largemouth this morning that were in there with the schooling fish, so I stayed and fished for about another hour, but all I caught after that was spots. I would have only improved by an ounce here and an ounce there."

Thomas didn't catch a keeper the previous time out at Pickwick, so his finish represented a major turnaround.

"I'm truly ecstatic," he said. "Coming in, if you'd have just told me I'd make the Top 10, I would have been thrilled.

"Honestly, even driving to Pickwick, I have no confidence. I don't like that lake. But you want to do good for your sponsors and I was disappointed with the way I fished there.

"To rebound the way I did here, I'm pretty proud of myself."

His previous best finish on the tour was a 5th at Kentucky Lake 2 years ago. This was his second Top 10 at Beaver.

He caught just three fish today, but his bag was second-best of the day after Fukae's. His biggest fish was a 4 1/2-pound largemouth.

"I got two really good bites and I thought I was on my way," he said. "I caught the big one at about midday and thought I still had time to get a really big stringer, but it just didn't happen after that."

He figured his bomb at Pickwick had cost him any chance to qualify for the Forrest L. Wood Championship, and he said that mentality helped him this week.

"I thought that since I can't make the championship, I might as well go for a check," he said. "Now I'd like to make two more Top 10s in a row and see what happens."

He said he only lost one fish over the 4 days. "I fished about as well as I could fish." 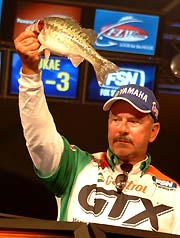 
Darrel Robertson turned in his second straight Top 5 at Beaver.

Robertson made some good money today as he moved up from 9th to 5th with his 9-05 bag.

"I didn't want to go home with $20,000 (for 10th place), so I fished hard today," he said. "I'm tickled with it, especially after blowing it yesterday and not catching anything (actually 2-14). I went out like I always do at Beaver – determined to catch a 10-pound stringer – but the bite's not like it was the first couple of days."

He was 2nd here last year and this was his third Top 10 in this event. "I'd have to say this is my favorite lake, even though it's not really my style of fishing. I'd rather be somewhere throwing a spinnerbait or flipping a jig.

"But I like to fish for fish that are trying to find something to eat, and that seems to be the way it is when we come to Beaver."

He said he doesn't put much stock in his newfound lead in the Angler of the Year (AOY) standings. "I really don't want to worry about that, but it'd be an awesome deal if I ended up there after the last tournament."

> Wurm had an abbreviated practice on the heels of the Santee Cooper Bassmaster Elite Series, and he called his 6th-place finish "very gratifying. I feel very, very good actually, because I really wasn't supposed to do that well. But I went on gut instincts and threw something together, and I rode that horse as long as it would carry me."