Beaver Still Too Chilly For A Major Sight-Fest 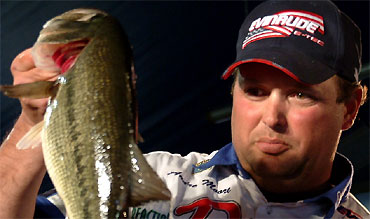 Andre Moore has two wins at Beaver to his credit, but says he'll be hard-pressed to notch a third victory under the current conditions.

You had to do at least a moderate amount of sight-fishing to achieve a high finish at the Wal-Mart Open (Beaver FLW) last year. It's a much different story this time around.

The 9th edition of this event near the giant retail chain's Arkansas headquarters won't have the narrow focus of the 2005 tournament, which took place a week later on the calendar. The still-chilly water has kept the bass from moving to the spawning beds, so competitors will have to figure out how to catch them sight unseen.

"I think it'll be a typical Beaver tournament, with weights maybe a little lower than normal because you can't see (the fish)," said Arkansas veteran George Cochran. "But the water's been warming up and they're starting to bite better every day."

Before getting into more information about the bite, here's a closer look at the lake itself.

Andre Moore of Arizona will seek his third victory in this event in the past 5 years. He's not high on his chances though.

His wins were on sight-fish bites, and he won't get to employ his favorite tactic this time. He's not sure what to do instead.

"Everything's tough," he said. "Usually you can pick up a worm and catch those spots pretty easily, but I can't even catch them. I've had a terrible practice. It's the worst I've ever done here."

He said he'll probably end up throwing crankbaits, worms and Sweet Beavers. The latter is a bait manufactured by his own company (Reaction Innovations).

"I don't think I'm going to go out and whack them, that's for sure. I'm just going to try to catch five of anything." 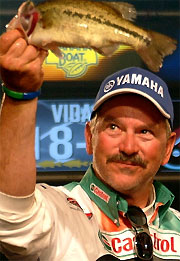 Oklahoma's Darrel Robertson, who was 2nd here last year and 9th in 2002, is pretty sure he can catch a limit. Whether that bag will weigh in double digits or not is still to be determined.

"I can catch some fish, but the question is whether I can catch fish that are big enough," he said. "The thing about Beaver is you have to fish for a 10-pound stringer, and you have to get some (largemouths or smallmouths) to do that.

He hasn't completely ruled out sight-fishing as a factor. He didn't plan to look at any last year, but then saw a 4-pounder on a bed at his first stop. He caught that one and went the sight route the rest of the way.

"There could be a decent sight-bite by Friday or Saturday, but I don't think anybody's going to be able to sight-fish to get that far," he said. "Now, if I go out and find another 4-pounder on a bed first thing, I might change my mind." 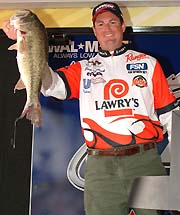 
Jason Kilpatrick thinks jigs and crankbaits will be the primary tools of the top finishers.

School is In Session

Jason Kilpatrick of Alabama finished in the Top 10 here each of the past 2 years and was 18th in 2003. He got plenty of bites during practice, but size was an issue for him as well.

"I'm catching quite a few fish, but I'm not happy with the quality," he said. "But it's changing every day and more and more fish are moving up. At this time of year, things literally change by the minute."

He thinks an angler who can get on a good deep bite stands an excellent chance to fare well. "Guys catching schooling fish can get a better grade of Kentuckys (spots)," he said. "Those deep-water roamers are generally a little bigger than the ones you find in the timber or by running docks. Most of those fish weigh about a pound."

As for patterns, he mentioned a couple of old standbys. "Jigs and crankbaits have really dominated here in the past, and I think they will again."

His strategy is to secure a limit of spots in the morning, then hunt bigger bronzebacks after lunch. "I'd like to get 7 or 8 pounds, then dedicate the second part of the day to one or two big bites. I think I can do that with smallmouths – they're the first ones to come up."

The weather forecast calls for strong winds throughout the tournament, and he thinks that'll be a benefit. "With the lake lower and clearer than we've ever seen it, any appreciable wind should pick up the catch."

Cochran's day 1 strategy is the opposite of Kilpatrick's: He'll try for a quality largemouth or two right off the bat, then attempt to fill out his limit with spots.

"I'm going to start with the largemouths in the dingier water (up the White River), and then go back to the main lake for the smaller spots," he said. "That might be the wrong thing to do, I don't know yet.

"Last year I finished 14th, and I was able to catch largemouths when the wind blew."

He said he's found 60-degree water up the river. That's warm enough for the fish to be on the beds, but the water's too dirty to bring sight-fishing into play.

Here, in no particular order, are BassFan's recommendations for the Top 10 to watch at this event.

1) Dan Morehead – He won here in 2003 and is fishing well this year. Will try to sustain the momentum of a Top 5 at Pickwick.

2) Shinichi Fukae – He has two Top 5s in four events in 2006, and there's no question he's put in a lot of practice time here. Knack for consistency could be a big key.

4) Anthony Gagliardi – Points leader looks to rebound from a 101st at FLW Series opener at Lanier.

5) Randy Blaukat – If spinning rods, small jigs and small crankbaits are necessary to catch limits, he's as well-equipped as anybody.

6) Tom Mann Jr. – This is a spotted-bass lake, and he's among the very best at catching that species.

7) Jason Kilpatrick – His record here over the past 3 years is too good to ignore, and he seems to have confidence in his plan.

8) Brennan Bosley – He was 2nd at Murray and 7th at Pickwick, and now he comes home to a lake where he's always been strong.

9) Jim Moynagh – Deep-water jigging is his game, and this is a good time and place to play it.

10) Darrel Robertson – His runner-up finish last year was his second Top 10 here and proved he can make the right adjustments.

Here's the Weather Channel's forecast for the tournament days. Note the big temperature drop on Saturday.

> Chad Morgenthaler of Illinois said he had an excellent practice. He was understandably hesitant to divulge much about his pattern. "It's going to be a tournament that's about adjustments, I can promise you that," he said. "I'll have to make the right ones, but the fish seem to be setting up where I need them to be."

> BassFan Big Stick Chris Koester, who recently moved from North Carolina to Arkansas, is fishing the tournament as a co-angler. To read his practice report, click here.