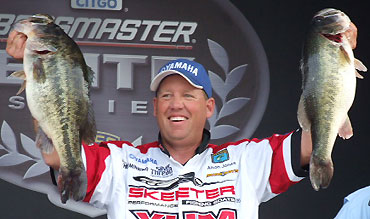 BASS announced shortly ago that Alton Jones had been DQd from the Santee Cooper Bassmaster Elite Series. The announcement was made at 9:57 p.m. EST – approximately 5 hours after the scales had closed.

Prior to the DQ, he was in 2nd place with a 35-06 sack. He described his catch as his "career best day in a BASS event – (his) best day in a tournament ever."

A statement issued by BASS said he was DQd for a violation of BASS Rules 3 and 12. According to BASS, Jones was "given assistance in operating his boat while he located fish during the tournament's official practice period."

Kevin VanDam was DQd for a similar violation on Monday of this week (to read that story, click here).

BASS tournament director Trip Weldon was not available for comment tonight, and Alton Jones did not return BassFan's calls.

But BassFan did interview Weldon about the VanDam DQ shortly after weigh-in today. That interview sheds a little light on the Jones DQ.

Weldon quoted both BASS Rules 3 and 12 in his decision to DQ VanDam. The applicable part of BASS Rule 3 states:

The applicable part of Rule 12 states:

VanDam was DQd because a non-boater registered in the tournament drove VanDam's boat in practice, while VanDam stood on the front deck and looked for bedding bass.

BassFans likely remember that Tim Horton had his day 1 weight DQd at the 2005 Smith Lake Bassmaster Elite 50. Horton's paid observer – in other words, a non-competitor – held a bush to position the boat while Horton fished to a bedding bass.

BASS Rules state that penalties for a rules violation may include the following:

So why did Horton just lose a single day's weight, while VanDam was DQd from the entire tournament?

Weldon said VanDam's case "fell into (b). Kevin was practicing for the tournament, looking for fish for all 4 days. The Timmy Horton deal at Smith, we had announced and written that observers can't assist you in any way. (The observer) was assisting Timmy while he was fishing for one bedding fish. There's a clear, distinct difference."

Weldon also noted: "I want to reiterate what a class act Kevin is and how professionally he handled it. I told him, 'I've had very little sleep, and I'm sure I had less than you, Kevin.' He agreed."

Questions About the DQ

While there appears to be some initial clarity as to why Jones was DQd, there are many more questions than answers at this point. The first of which is who assisted Jones in practice.

Jones, for years, has practiced with his son Little Alton. There is at least some chance – if not a strong chance – it was Little Alton who assisted Jones in practice.

Note that Little Alton is neither a "non-boater" as implied by the rule – since he wasn't registered to fish the tournament – and not an apparent "expert" on the water. But the rules do prohibit "the assistance or advice of anyone for the purposes of locating or catching bass (unless a competitor in the event)."

Again, someone else could have assisted Jones.

Other questions that remain, for now, unanswered:

Just like VanDam, Jones' DQ affects his 2007 qualifications. But VanDam's guaranteed a Majors spot this year because he leads the BASS all-time money list. Jones is not, since he falls below the 10th-place cutoff spot for money qualification. So the DQ affects Jones' 2006 qualifications too.

Prior to this event, Jones was 25th in the Elite Series points. His only way into the 2006 Majors is through the 3-year combined Angler of the Year (AOY) points. The Top 40 in the combined points qualify for the Majors. 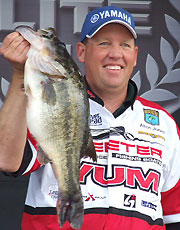 
Jones faces a lengthy list of struggles when it comes to qualifying for BASS's big-money Bassmaster Majors and Classic.

BASS has not yet published a rolling list of who's in and who's out of the first Major, but prior to this event Jones' 3-year average AOY standing was 46th, and it'll drop with no points accrued here. So it doesn't look good for the first Major at least, and maybe more.

To fish the 2007 Bassmaster Classic, he has to finish 36th or better in this year's AOY race. Again, he could backdoor the Classic through the Bassmaster Northern and Southern Tours, the ESPN Outdoors Bassmaster Series or even via the BASS Federation Nation.

Jones is currently ranked No. 48 in the BassFan World Rankings and the rankings affect 2006 Top Gun Championship qualification. The DQ will certainly hurt his ranking, but by how much isn't known.

And to requalify for next year's Elite Series, he has to finish 70th or better in the AOY race. Doable, definitely, but another uphill struggle.

At some point the question will come up: Jones is a two-tour pro, and has been critical of BASS at times in the past. Given the uphill struggle he faces this year, will he continue with this Elite Series season? For the record, should he decide to withdraw, he would still owe bass the balance of his $55,000 entry fee.

> Again, although it's not confirmed, it's at least a reasonable guess that Little Alton did assist Jones in practice. The Jones family travels together, and his wife Jimmye Sue homeschools the children. Little Alton has been a fixture on the tours – and in his father's boat – for years. In the past he often appeared onstage with his father.