Jigs, Blades, Plastics All Had Their Moments 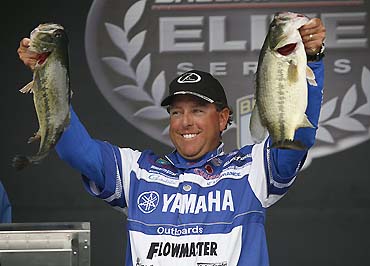 Dean Rojas had a near-perfect week, but couldn't quite match the torrid Greg Hackney.

The top finishers at the recent Rayburn Bassmaster Elite Series caught most of their weigh-in fish in or around spawning beds. A variety of lures were effective, perhaps because the spawners were poised to kill

anything they perceived as a threat to their nests and the post-spawners were hungry in the wake of the reproduction ritual.

Predictions that a sight-fish pattern by itself wouldn't hold up for 4 days were accurate, and that was at least partially due to the variable weather. Day 1 featured ideal conditions for just about any pattern, but adjustments were necessary from day 2 on.

Some anglers got a good look at most of their fish before they caught them, but a backup plan was also required to finish in the big money.

Dean Rojas used a combination of sight-fishing and throwing a frog to rack up a massive total that was nearly 8 pounds better than anyone in the field – except for winner Greg Hackney.

"I targeted mainly spawners," he said. "After practice, I thought I had enough to get me through 2 1/2 or 3 days, and I figured I'd do well as long as I kept finding new ones."

He weighed in four that he'd looked at and one that bit the frog on day 1. After that, it was two frog fish per day, and that bait accounted for all seven of his biggest fish.

"I always sight-fished first, just to get one in the boat and get the day rolling and build some momentum," he said. "Then I'd go to the frog fish and fill out my limit on them, and then I'd go back and look for other big ones on beds. I was finding new bed fish every day."

He used the frog as a searchbait at times, and also had some areas that were ideally suited for it. "It was a pattern that evolved. I caught some fish on it in practice, but it got even better during the tournament."

> Main factor in his success – "Throwing big baits and looking for big fish, and not losing anything." 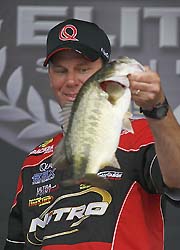 
Kevin VanDam used a spinnerbait exclusively over the final 2 days.

Kevin Van Dam caught most his big sack on day 1 with a Carolina-rigged lizard, and that bait also accounted for part of the day 2 bag that put him into the lead at the midway point. That pattern died out though, and he resorted to a spinnerbait.

> Main factor in his success – "Nothing really. There was nothing that was that big of a deal."

> The bait comes with No. 4 and No. 4 1/2 blades, but he switched out the 4 1/2 on the rear for another 4. "It allowed me to reel a little faster and run it a little deeper," he said. "And on the second day I caught a fish that was spitting up baitfish, and they were the same size as that No. 4 blade." 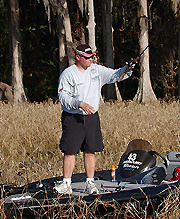 
A lack of sun on the final 3 days cooled off Bill Lowen's primary pattern.

Rookie Bill Lowen was on a hot swim-jig bite throughout practice and the first day of competition.

"I was getting 30 to 40 bites a day, and they were the good, quality bites you need – 3- to 5-pounders," he said. "If the sun had stayed out, I think that pattern would have been strong. As it was, it just kind of dwindled."

He worked the jig through woody areas and all the fish he caught came from water no deeper than 2 feet.

"I wasn't sight-fishing, but when I came across one, I'd work on it a little," he said. "I caught two on the final day off of beds."

If he couldn't catch them on a jig, a 4-inch tube often did the trick.

> Main factor in his success – "Fishing extremely shallow and extremely fast, and covering a lot of water." 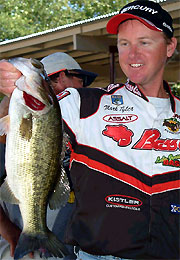 
Mark Tyler adjusted to the mood of his fish each day.

Mark Tyler went after spawning and post-spawn fish in the backs of creeks. "Most of them were on 2-foot-deep flats, or on the bank in a foot of water," he said. "The post-spawners would be isolated in 2 to 3 feet, but they'd be straight out from the flat."

The water was stained, so he couldn't sight-fish. But he could distinguish the spawners by their behavior. "Some of them would strike two or three times before I caught them, and sometimes I'd come back to that area later in the day and catch them. You could tell they were protecting something."

A jig was his main bait on the first 2 days – he flipped it next to Cypress trees. That didn't work on windy day 3, so he switched to a spinnerbait and caught the biggest bag of the day. On day 4, he caught all five on a popper-type topwater plug.

> Main factor in his success – "Just kind of adjusting every day as the mood of the fish changed. Each bait that I used was very important."

> "The key (to the popper) was working very slow and keeping it in the strike zone for a long time."

> Lowen said he broke off an enormous fish early on day 1. "I tell people it was a 10-pounder just so they don't think I'm crazy, but it was more like 12 to 15. I saw it 10 feet from the boat in clear water, and I took a couple of steps back on the deck and said, 'Whoa, this isn't real.' It broke 20-pound (line) like it was thread. People have asked me why I wasn't using braid. Well, I wasn't, and I paid for it. My tournament would have been a little different if I'd caught that one."