BACK
The Grassroots Factor 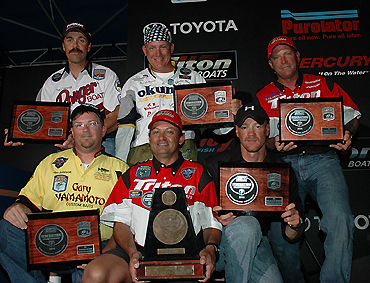 enjoyed the perks they've been privy to this week. The interaction with the tour pros has been fun and the media attention has been nice too.

Now it's time to get down to business. All have "real" jobs, but for these 3 days, their business is fishing. When they launch their boats at Florida's Lake Toho today, they'll be on equal footing with Kevin VanDam, Rick Clunn, Larry Nixon and the rest of the 51-angler field.

Each of the six topped tough competition just to get here – the Federation route to the Classic is arguably the toughest – and they've had the same 4 days of practice that the pros have. Half of them have made it this far before, so they haven't been overwhelmed by anything that's happened this week.

They think they can make a run at the cut, and if everything goes right, maybe even win. After all, Federation qualifier Bryan Kerchal did just that in 1994.

Here (in no particular order) is a brief look at each angler and some of his thoughts about competing in the sport's most tradition-laden event.

"I really don't know why I don't feel pressure," he said. "I've kind of been taking it like just another tournament ever since I knew I made it. I've been mingling with the pros and finding out they're regular Joes like me."

He's a general contractor back home, and this is his second trip to Toho. The first was last April for the last year's Federation National Championship. It's a changed lake and he's basically starting from scratch, but he thinks that prior experience is a positive.

"I feel it's little bit of an advantage over guys who may not have been here before, as far as knowing what to look for, but everything's different.

"Pre-practice was a little tough as far as water temperature at first, but as it warmed up, so did my confidence," he added. "It got a little better and I think I'm going to get a few."

His goal is a Top 10. "I'd like to have a decent showing for Colorado and the Federation as a whole. But I'm coming out for the fish I think could win the thing off the bat. I'm shooting for a Top 10. I think by doing that, I might accidentally slip into the top spot."

And he noted: "This is one of my dreams – fishing the Classic. It's one of everybody's dreams. They might say it's not their dream, but in secret they pretend to hold that trophy over their head. I'm here baby."

The Colorado Federation has opted to remain with the BASS Federation Nation rather than follow The Bass Federation Inc. (TBF). That pleased him.

"I'm actually very proud of the way our state handled everything," he said. "Every club has its own little issues, but we came together as a whole and did what I think was best for everybody."

South Africa's Anre' De Villiers is fishing just his second event in Florida, but he's batting 1.000 so far. His first tournament in this state was the Federation National Championship at the Harris Chain of Lakes, which he won by a 6-12 margin.

Nothing he did at Harris will come into play this week. "They're totally different lakes – it's as if they're in different worlds," he said.

On the other hand, this is the world that he prefers. He fished a deep Carolina rig at Harris, but the shallow-water styles at Toho actually suit him better.

"I enjoy shallow water and I enjoy power-fishing," he said. "I'm comfortable with the way I fished at Harris, but I only did it because I thought it gave me the best chance to win."

He hasn't been bothered in the least by all the hype surrounding the Classic and said he doesn't feel any pressure. "I'm a very relaxed person – I've always been someone who doesn't often get nervous. The people back home couldn't comprehend the magnitude of this event, but I don't battle to go to sleep at night."

He owns a boat company in South Africa, so he does his best to stay out of the politics of tournament fishing. Thus he hasn't been embroiled in the Federation upheaval.

Bob Soley, a 39-year-old plumber from Trenton, N.J., is fishing his second Classic. He also qualified in 1999 through the Bassmaster Invitationals and finished 22nd in a field of 45.

"The first time you come, you just want to catch some fish," he said. "This time, I'm going to try to fish to win. That's all that matters."

He said the Classic is a much bigger overall event than it was 7 years ago. "Bass fishing in general seems to be getting bigger every year. Not that (the Classic) wasn't big then, but now that ESPN has gotten involved, it's definitely bigger in that respect."

He's fished several tournaments in Florida and the lakes and the fish here suit his style. "I like to flip, sight-fish and power-fish – that's my kind of fishing," he said. "Down here (in the four-lake Kissimmee Chain), you can get to a lake that suits your style.

"I think that definitely will be a key. This thing might be won by a combination of two or three of the lakes."

He's done his best to keep up with news of the Federation flap, but said he still doesn't have it all straightened out in his mind. New Jersey voted to go with TBF, and he's a bit disappointed by that.

"When I started fishing Federation tournaments was right around the time that Bryan Kerchal won the Classic," he said. "I just think there might be a kid in his room reading Bassmaster (Magazine) thinking that he might win it some day, and he might not get that chance."

Until last month, James Kennedy was a mechanic at a large auto dealership in Louisiana. He was told that if he took time off to fish the Federation Championship, his job wouldn't be there when he got back.

"You can tell where my heart was at, because I'm here," he said. "It came down to a decision by the service manager, and after I made the Classic I was given an offer to come back part-time."

This is his first time in the Classic and he said he was unsure how he'd be treated by the tour pros. The reception he received was better than he expected.

"The thing I've enjoyed the most is getting to meet the Elite (Series) anglers and be part of the same tournament," he said. "My goal has been to make the Classic since I was a kid, and all the guys fishing in it know as well as we do that anybody could win it."

He hopes to use this tournament as a springboard to a pro career. "I've always wanted to do it, and what better place to start than at the Classic?"

He's followed news about the Federation closely over the past couple of months. "We're (the Louisiana Federation) sticking with BASS, and I back that 100 percent," he said. "The reason I'm here right now is because of the BASS Federation and the way it's been all these years."

He also qualified for the 2001 Classic at the Louisiana Delta. He finished 43rd out of 45 anglers after he got only one day of practice. He's a senior technician at a research laboratory and had used up all of his vacation time.

He's had all the practice at Toho that anyone else has for this event. "I struggled a little bit last week, but things turned around nicely (Wednesday)," he said. "I'm quietly confident."

He hopes to someday fish for a living. "I'd love to switch to this as a full-time career. I'm trying to gear my life toward that."

On the Federation controversy, he said: "I feel strongly about staying with the Federation Nation. I'm a pretty strong Federation guy, especially since I've been fortunate enough to qualify for a couple of Classics."

He's focused his energy on fishing over the past few weeks and hasn't been involved with the Federation controversy.

"I've stayed out of all that, but my heart is with BASS," he said. "But for this tournament, none of that will affect me at all. I'm just going fishing."