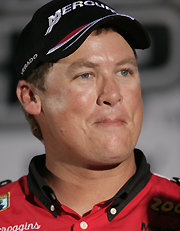 Terry Scroggins is one of the 'gimme' picks to win the Classic.

(Editor's note: We asked BassFan's Jay Kumar about who he thought would win the Classic. This is what we got.)

"Who do you think will win the Classic?"

Have you been asked that question yet? If you've got friends like mine, I bet you have. Did you have an answer? If you're like me you probably had several, mostly based on gut feel.

Even though we all know that picking the winner of a bass tournament is like trying to guess how many gumballs are in a jar, the fact is we all have that gut feel. And the beauty of bass fishing is that anyone can win.

Let's face it: if Kevin VanDam won this week's Bassmaster Classic and the next five tournaments after that, it would be awesome, but it would be kind of boring.

So we're left with multiple possible winners: the "gimmes," the educated guesses and the dark horses. I'm still not sure where I come out on the "who's going to win" question, but here's where my thinking has taken me.

These are the easy ones.

> Kevin VanDam – Won the last three BASS events, including the 2005 Classic, and is the No. 1-ranked angler in the world. He hasn't done particularly well in Florida and has never won an event there, but so what? Who wants to bet he won't win now? Not me.

> Greg "the Hack Attack" Hackney – No. 2 in the world, formerly No. 1 in the world, FLW Tour Angler of the Year last year, by far outfishing everyone in the world on the tours. He's red hot and could win anything, but so far has done poorly in Classics. Again, so what? He'll be up there this time. This Classic won't be a "find the dinks" tournament.

> Mike "Ike" Iaconelli – A hot fisherman, 4th in the world, and a guy who feeds on hype. Right now he's the most popular fisherman in America, and that could help him to another Classic win.

> Terry "Big Show" Scroggins – Knows Toho like the back of his hand, won the Bassmaster Southern Open there in November, ranked 11th in the world because he's been smokin' ever since hitting the Bassmaster Tour in 2002. He's also done well in Florida (no local jinx): He won his second tour event ever, on Lake Okeechobee; finished 5th at Toho in January 2005; and has never finished below 16th at a Classic.

If it's a sight-fishing event:

> Dean Rojas – Rojas is a sight-fishing master, he set the BASS one-day (five-fish limit) and total tourney weight records on Toho in 2001 doing exactly that, and is guaranteed to slam the fish if they're on beds.

> Aaron Martens – The 2005 Bassmaster Angler of the Year happens to be a great sight-fisherman. In fact, he's good at just about everything. For Martens, it's not if he'll win a Classic, it's when.

Guys Who Have Won 'Here' Before

Guys who have won Classics at Toho

Guys who have won Tour events at Toho...

...and therefore could win here again:

> Tim Horton (December 2001) – That tourney had tough conditions (the bite was off). He wins when there's an opportunity to find something different. 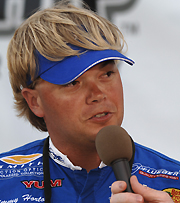 
Tim Horton has won at Toho before and could do it again.

> Dean Rojas (January 2001) – Set the aforementioned records in a sight-fishing fest. The tournament started just as the fish were moving up, as this one might.

Guys who have won recent events at Toho

Guys who have won Classics in a 'similar' place

All of these guys won Classics held on the lower Mississippi Delta (the Louisiana Delta). Yes it was mid-summer and hot, and that is tidal water, but in some ways that's as close as you're going to get to a Florida lake: Louisiana bass react the same way Florida fish do to cold fronts, and there's no end to the vegetation in Louisiana, just like Florida.

Guys who have won Classics before

Once you've been there, you know what it takes to get there. Any of these fishermen could win again, but of them all, Jay Yelas and VanDam have historically done the best at Toho.

For me, dark horses tend to be the more interesting picks. What's behind these guys? Why do they have a shot? Here's my shot at some answers.

California's Ish Monroe hasn't done a whole lot on tour, but for some reason he seems to do better in Florida. Let's look at the numbers.

His average finish since August 2001 is 87th, and that even includes a slate of 50-man Bassmaster Elite 50 events. In Florida, his average finish is 46.25. At Toho it's a little lower than that except for his last three finishes there, which average 17.67.

Monroe is wildly inconsistent, but if he's going to get it together enough to win one outside of his home state of California, where he does well, a smaller-field event in Florida might be his best shot – especially since he's a good sight-fisherman.

Arkansas' Ron Shuffield has a 4th (in 2005) and an 11th at Toho, and is an excellent – if unheralded – fisherman. He's "almost" beaten Denny Brauer at flipping (Eufaula in 2004) and has beaten Zell Rowland fishing topwaters (Lake Hamilton in 2003).

Since he's not fishing BASS anymore after this event, he also should be comfortable taking risks in this event.

Ol' flat-top, Alabama's Randy Howell, has been largely under the radar since winning the first Bassmaster Elite 50 in April 2004. But he's been fishing pretty well since then.

He's also done decently at Toho in the past (Top 20-ish), likes fishing shallow and is a very good sight-fisherman.

X factor: If the sight bite doesn't hold together, will he hem and haw or will he have a solid backup pattern?

Yes, those were summer tournaments and yes, Davy hasn't exactly set the world on fire in Florida, but he does have a couple of decent finishes there over the years, including a 10th at Toho.

Most importantly, he can get ramped up for big events. His average Classic finish is just over 15th and he's won one Classic already, as well as an FLW Tour Championship.

Then again, the spring can be tough for him. Can he start the spring of 2006 off in a big way?

X factor: Hite has yo-yoed big-time from year to year. Last year was good, so if that yo-yo pattern holds up, he'll have a bad year this year. 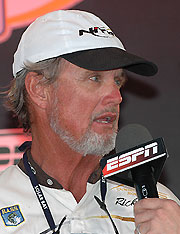 
Kumar says in many ways Rick Clunn 'is' the Classic.

I think most people wouldn't be surprised if Rick Clunn won another Classic. But then again, maybe they might. He won ESPN's "greatest angler" award last year, and that's a legacy-type award. It looks back. I kind of wish he never won it – not because he doesn't deserve it (he does). I just wish it was after he retired. Because I still think he's going to win another Classic, maybe this one.

Why? Sometimes the stats tell the story. The Classic record book should be called the Clunn record book:

Pretty much anything Clunn does at a Classic now sets some kind of record. The only question is whether he can get back that "bore a hole in a steel plate 100 yards away" intensity he used to have.

We all know these guys – so close and yet so far. Some part of us roots for all of them. Will they do it this time?

> Aaron Martens – Even VanDam felt a little bad for Martens at last year's Classic. Second place again. Second place in three of the last four Classics. Set a record for the most 2nd places at the Classic. Bummer. But this time Martens only had to wait 6 months for redemption – and he's a great sight-fisherman. The X factor is that so far this year, on the FLW Tour, he's finished 99th and 181st.

> Tommy Biffle – Until Martens took over the top 2nd-place-guy spot, Biffle held it. He has two 2nd-place Classic finishes (he lost by 4 ounces to Bryan Kerchal in 1994) plus another two Classic Top 10s. He's an excellent flipper (obviously), among other things. Can he overcome the runner-up jinx? 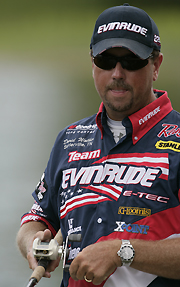 
David Walker is one of a few perennial 2nd-placers whom people are pulling for.

> David Walker – Zero tour-level wins. That fact has, on occasion, haunted Walker. The most recent time was on this very lake – in January 2005, when he lost a Bassmaster Tour event to Takahiro Omori by 2 pounds and change. Walker is good in Florida and for sure he can catch fish using his preferred technique of flipping. Can he land his first tour-level win this time? And, like his friend Martens, can he overcome his bad start to this year on the FLW Tour?

If It Gets Tough

I'll keep this short. If conditions get tough, the stock of veterans like Clunn, Nixon and even Cochran, who likes hot water, goes up. They can slow down to catch fish better, and they all have Classic wins already so they shouldn't be out trying to prove something.

Of course, you still have to overcome the wealth of Florida experience Scroggins has.

> Let's not forget that everyone fishing this event has a shot to win it. Just because someone isn't mentioned above doesn't mean they won't take home $500,000 on Sunday.

> Arkansas' Scott Rook might be a sleeper here. He's done decently in Florida and at Toho, and last year felt he finally got Florida figured out.

> MIAs – Guys who have done well in Florida and specifically at Toho over the years who are not fishing this event: Mark Davis and Alton Jones.

> Coble has won three amateur championships, a great feat, so of all the amateurs fishing this Classic, he looks to have the best shot. But his X factor is whether he can handle Classic-level competition. VanDam, Hackney, Yelas, Ike and Clunn, to name a few, definitely are a different caliber of fisherman than even your above-average weekender.

> Nine times out of 10, day 1 performance determines the Classic winner. In other words, do well on day 1 and you could win. Do poorly and you're out. Some of that's performance, some is psychology. But that phenomenon could be upended this time. If it gets cold, windy and/or rainy, the sight bite could be off. Yes, guys will still bed-fish their GPS points, but if big spawners pull out or stay out, look for guys better at fishing outside to do well.

> If either Larry Nixon or George Cochran is doing well, look for the other one to do well too. They're good friends and share a little info, and for some reason tend to do well when the other one is (remember last year's FLW Tour Championship?).

> Clunn's string of consecutive Classic appearances stopped at 28, but this will mark his 30th Classic, making him still the "iron man" in this category.

> As of this Classic, Nixon ties Roland Martin for the second-most Classics fished at 25. Remember that Nixon isn't fishing BASS this year so this might be his last Classic.

> After this Classic, the man most likely to reach or surpass Clunn's 28 straight Classic appearances is Kevin VanDam. Right now VanDam and Yelas are tied with 15 – 16 including this one – straight Classics fished, but this is Yelas' last BASS event for the foreseeable future. (Tim Horton is next in line with 7 straight Classics as of this year.)