VanDam On No. 1 Rank And The Toho Classic 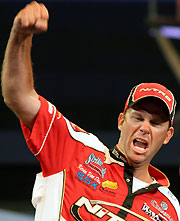 Kevin VanDam wants the weather at the Bassmaster Classic to be unpredictable – that'll force anglers to adjust and should work in his favor.

Kevin VanDam's performance at the 2005 Pittsburgh Bassmaster Classic was a display of total, utter power. He was mad, focused, intense – feel free to throw any other competitive adjective in there you'd like. What made that Classic victory – his second – even more remarkable was that it marked his third consecutive BASS victory.

So as all the bass-fishing heads gaze toward Florida for next week's Classic, he's an obvious favorite. Some would say the hands-down favorite. And if he wins, the recordbooks will need updating. First,

BassFan spoke with VanDam and asked him first, how does he feel about his return to the No. 1 spot in the BassFan World Rankings? And second, what are his thoughts about the upcoming Classic?

BassFan: The World Rankings formula was recently tweaked to include Bassmaster Elite 50 events and strength-of-field weightings. Do you think those were good changes?

VanDam: Overall I think it's a pretty good and fair system. It's so hard to mix different tours and things together, just because it's apples and oranges. But it's probably a lot better than it was – or a lot fairer for everyone than it was.

I don't watch from event to event. I go out and just try to win every week and where you end up is where you end up. (To try to maintain the No. 1 spot) would be like fishing for Angler of the Year as opposed to fishing to win. If you're worried about having a bad finish, and not taking the chances you have to (in order) to win, that probably will hurt you in the Rankings.

Greg Hackney ended the year ranked No. 1, but you're back on top now. When you watch Hackney, does he remind you at all of yourself when you first broke out?

Greg's a really good fisherman. Arguably, he's been one of the hottest over the last couple of years. He's got a great work ethic and he's very versatile. That's what it takes to be consistently good.

Mike Iaconelli's really been similar though. We all wish we knew what it took to get on those streaks so we could stay on them all the time. It's not that easy.

You have the chance this year to win back-to-back Classics. Will that influence your approach to this one?

I look at them all the same. You have to have that focus to truly win. I'm not worried about any of the hype, or any of the other stuff about it. I've been to the lake plenty of times.

I know what I have to find, and the way I have to fish, to have a shot at winning. A lot of that is going to be determined by conditions and what we have weather-wise leading up to it.

I like the lake, and I really like that we're kicking off the season with the Classic and going right into the tour (Bassmaster Elite Series). We can carry that momentum the Classic generates into the regular-season events, and it's great for the sport to do it that way.

Do you approach the Classic differently than you do a regular-season event?

No doubt. Just because it is the Classic, I've been thinking about it a lot longer, and preparing for a longer time.

The thing about the Classic is it's an all-or-nothing event. A Tour or Elite Series event is not that way because I have to move onto other events the following week.

You finished 12th at last year's Toho Bassmaster. That event was in January. Do you think your spots and patterns from last year will be there this year?

I hope not. Last year we had a lot of fronts and the bite was really tough. It was really about finding an area that had some fish in it and working it real thoroughly. The guys who are really good at that – like (Terry) Scroggins and (David) Walker – excelled at that.

I'd prefer (this Classic) to be an event where it changes from day to day. I don't want to see stable conditions where a guy catches them flipping or with a spinnerbait for 3 days. That almost never happens in Florida this time of year.

In the past, I always thought deeper patterns were better for overcoming spectator traffic. But I found that not to be true. The shallow water around heavy cover is probably the least affected by spectator traffic. So Toho should set up well for that.

It's going to affect some of the guys, and probably one advantage I have is I'm used to that. I've thought about it and tried to prepare for it. When I do find the area and pattern I want to fish, I'll have that in mind.

I think some guys don't think about how that might affect them. It's hard not to have something to fall back on if your primary pattern is affected or taken away from you.

Do you expect the heaviest traffic to be around you?

A lot of other guys, like Terry Scroggins, will probably have a lot of spectators too, so that'll equal it all out.

Before the Pittsburgh Classic, you mentioned you thought it would be one of the easiest Classics to win. Where does this upcoming Classic rate in terms of difficulty?

I think this one offers a lot of challenges that we haven't seen before. There's a lot of variables here. One is just the vastness of the chain and the amount of cover that's here, which is a good thing and bad thing all in one.

The nature of it being a shallow system, with a lock in it to deal with, and obviously Florida-strain bass and it's the time of year when cold fronts can be a huge factor – those are all challenges. So there's a lot of variables that can really affect and swing an event from one day to another.

I'd say it's about average, or even tougher than some (to win).

What's your gut feeling about it? You feel good?

I feel confident, but I pretty much do every year whether I finish first or last. Like you say, I think this one is really exciting for all of us because of the type of fishery we're on. With the potential it has, it's liable to be a real slug-fest.

There could easily be four or five guys in contention, or somebody could even blow it out. The thing is you have that chance for a 30- or 40-pound bag to come from behind to win. You won't see that at Pittsburgh, or most anyplace we fish.

> VanDam will run a Bass Pro Shops/Nitro wrap on tour this year.

> His average finish in his first three Classics was 12th. 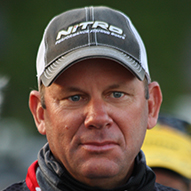