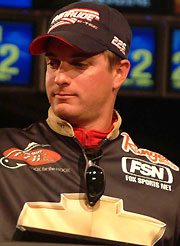 Anthony Gagliardi didn't buckle under pressure or succumb to the local jinx – he whacked 'em good.

The Chevy Open (Murray FLW) near Columbia, S.C. promised to be a slugfest, but nobody expected the drama at today's final weigh-in. Tim Carroll, who led days 1 and 2, delivered a jaw-dropping 30-15 sack. And yesterday's leader, Brennan Bosley, threw up a 24-13 limit. But local Anthony Gagliardi topped them all. His 28-04 bag of pigs gave him just enough to edge out Bosley by 1-08.

in recent memory – near-freezing temperatures and a driving rain. And his 2-day, 47-04 total is the heaviest "final-round weight" in FLW Tour history.

Tim Carroll made a hard charge and also set a record. His 30-15 limit today (a 6-pound-plus average) was the heaviest single-day weight in FLW Tour history. But Carroll couldn't overcome his lost fish on day 2, when he weighed three for 14-11, and finished 3rd with 45-10.

More than 10 pounds behind Carroll was 4th-place finisher Dave Wolak, who caught a 12-05 limit today and finished with 25-01 total.

Gagliardi's previous Tour win was at Kentucky Lake in 2004. The win here boosted his Tour winnings over the $500,000 mark.

Anglers weighed their fish one-by-one onstage, and each time, a big fish put someone else in the lead. Gagliardi was to weigh the final fish, and needed a little over 6 pounds to beat Bosley.

"That weigh-in was absolutely the best," Gagliardi said. "It was the most dramatic weigh-in I've ever seen. Compared to that when I won Kentucky Lake, that was nothing.

"Each person was weighing one big fish to take the lead. It came down to the last fish, and I needed around 6 pounds. When you see that weight pop up onscreen – there's nothing to describe that."

He used the same pattern today that carried him the first 3 days – jigs and cranks in deeper water. Details of his winning pattern, and patterns for the other top finishers, will be posted soon. 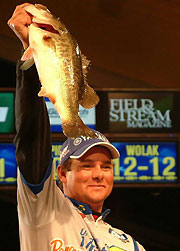 
Brennan Bosley said he fished flawlessly, and he's happy with his finish.

Bosley, from Benton, Ark., made it close. And he watched Gagliardi win once before, at when Bosley finished 7th at Kentucky Lake. But this event was an FLW Tour "Open," so 2nd paid $100,000. Not too bad.

"I feel great about it," he said of his finish. "You know, I did everything I could do. I went out and fished the last 2 days flawlessly. I never lost a fish. My execution was top-notch. I don't know if I've ever executed that well in a tournament situation.

Wolak had a short practice, which he thinks helped – he didn't get locked into shallow fish. And considering he finished 115th at the Okeechobee opener, he's all over his 4th-place finish here.

"I feel excellent about it," he said. "I stunk up the joint at Okeechobee, so I had it in me this week. I don't know what that did to me – doing so poorly at Okeechobee – but I told my wife that I really wanted to make the cut here.

"I had the stroke of good fortune to make the cut on a tiebreaker, so I went out to fished as hard as I could. I did a little bit of everything. When it got cold I made some adjustments, fished a little deeper and scratched my five fish out."

He noted he was impressed by Gagliardi's performance under pressure. "Seriously, my hat's off to Anthony. First of all, he was on his home water and had a lot of pressure. To come in with ridiculous weight, in tough fishing conditions, was very, very impressive to me."

Arizona's Cliff Pirch weighed 10-02 yesterday and 10-15 today to finish 6th with 21-01 total. Gagliardi's total was more than double his weight, so Pirch doesn't feel too bad. But he was cold today.

"I'm happy to get in the Top 10," he said. "I feel real fortunate to end up 6th. It was a great tournament. A lot of things worked well for me, and I'm real happy to be where I am."

"But we had rain that needed to turn to snow. I got three good bites on a jig and lost three. I let my hands get too cold and I didn't have good feeling today."

"I had a good tournament," he said. "I had to make some adjustments – I had some big changes that presented me some problems on day 3. Other than that, I'm pleased with what happened."

He fished shallow, and the 10-pounder he hooked today bit in less than 2 feet of water.

Florida's Terry Segraves finished at the bottom with only three fish for 7-05. He was on a shallow bite, which imploded when the weather turned cold.

"It's pretty lousy – I'm not very proud of it," he said. "I stayed with the shallow-water fish I found, and that kind of let me down. I stayed with them longer than I should have."

But along with Wolak, he's happy that his Top 10 here helps compensate for a poor Okeechobee finish. In Segraves' case, he finished 155th at his home-state opener.

"It's always great to get in the Top 10," he noted. "But when you get in there and compete against those other nine, you say, 'I want to win this thing.' When it doesn't happen, you're kind of disappointed."

> Gagliardi is currently ranked No. 7 in the BassFan World Rankings. The post-Murray rankings will be updated shortly.

> Carroll weighed an 8-pounder 3 of the 4 days, and noted he "lost" the tournament on day 3. "I had several fish pull off Friday, and any one of those would have been a $200,000 fish. That's easy to say in hindsight, but going down in the record books for the heaviest 1-day weight in (Tour) history is truly amazing."

> Along with the "final-round" FLW Tour weight record, Lake Murray also owns the "opening round" weight record – 49-08, set by Darrel Robertson in 2003.