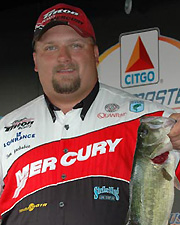 Paul Tormanen, a 39-year-old angler from Lee's Summit, Mo., was arrested at the recent Red River Bassmaster Central Open and charged with contest fraud. The Louisiana Department of Wildlife and Fisheries (LDWF) alleges that Tormanen tied fish to stumps prior to the competition days, then weighed at least one of those fish in the tournament. He was subsequently disqualified from the tournament and banned from BASS competition for life.

before the tournament and tying them to stumps in order to weigh them in during the tournament, and that officials were alerted to the tethered bass by a competitor. But who blew the whistle?

Red River competitor Sam Huckabee from Shreveport, La. told BassFan he found a tethered fish, then called BASS to report the incident. His account appears below.

Also, an LDWF official said fin clippings taken from the tied-up fish prior to the tournament will be used as DNA evidence against Tormanen. In addition, BassFan spoke with Heartland Tournament Association owner Ralph Haggard about whether Tormanen's run of strong finishes in that organization's events are now questionable in light of the Louisiana case. Details of both issues can also be found below.

Huckabee was in search of some secluded fish as he practiced for the Red River Open. Three days before the tournament began, he probed a backwater area near the Coushatta launch in Pool 4. He threw his crankbait near a stump and, after a couple of turns on the reel, he was hooked up with a fish.

According to Huckabee, the events that transpired from there eventually led to the arrest of Tormanen.

"I was just covering water, looking for some fish in abnormal places that not everybody would find," Huckabee said. "There's five or six stumps out in the middle of a little lake across from Coushatta, and when I threw up by one of them I hooked a fish. Well, then I figured out that I hadn't hooked the fish, but rather the line that the fish was hooked to, so I went over to get my crankbait back and unhook the fish.”

His first thought was that the fish had broken the line of another angler, perhaps by wrapping it around one of the stumps. "Then I realized there wasn't any hook – the fish was tied to the stump with braided line through its lower jaw,” he said.

“I immediately called Bassmaster headquarters because I knew somebody was cheating. I didn't know if it was from our tournament or not and I was really hoping it wasn't, but (the fish) was in real good shape and you could tell it hadn't been there long. I kept fishing in that area to see if I could find some more, but I never did."

Huckabee told BassFan that the next day, he got a call from an LDWF officer who asked him for the location of the fish. He gave the officer directions to the spot and was instructed not to tell anyone else about the fish. "It was real hard to keep my mouth shut all week," Huckabee said.

He heard nothing about the issue on Thursday (day 1 of the tournament). When he weighed in on day 2, BASS tournament director Jon Stewart told him that some wardens wanted to talk to him. Huckabee said he gave the wardens a written statement.

Huckabee has fished tournaments for about 12 years – this was his third year in the Central Open series – and had never before encountered an incidence of alleged foul play. "I'd heard of people cheating by doing something like that, but it was a shock to me," he said. "I hope they throw the book at the son of a gun. This gives the sport a black eye.

"It's hard enough to win money in these things without somebody cheating. But it does make me feel good that they caught the guy and I'm part of the reason."

Capt. Peter Oliver of LDWF Region III said officers took two fin clippings from the fish that Huckabee found (and Tormanen allegedly weighed in) while it was tied to the stump. A small piece was removed from the top of the dorsal fin and a hole was punched through the tail. The samples will be used as DNA evidence in the case against Tormanen.

"I wasn't directly involved with that, so I can't tell you exactly how big the (clippings) are," Oliver said.

He noted Lt. William Tyree, who's in charge of completing the case report, is still gathering statements from witnesses. The report should be on Oliver's desk Monday morning, and then it will be forwarded to the Natchitoches Parish District Attorney.

Once the D.A.'s office has notified LDWF that it has received the report, it will become a matter of public record. Oliver said he expects that process to be complete by the end of next week.

Tormanen has been a big-time winner in Heartland Tournament Association Pro-Ams over the past 2 years. He's won four events, which netted him approximately $57,700. In nine such tournaments over the past 14 months, he's finished no worse than 9th.

Ralph Haggard, owner of the Platte City, Mo.-based series, said his attorney advised him not to say anything about Tormanen until the lawyer has further studied the case. "We need to get some things cleared up and figure out what we're going to do," Haggard said. "Right now, I don't want to make any statements that might wrongly help or hurt Paul's defense. But as soon as I can, I'll be glad to go over all of this stuff."

Haggard said he met with Tormanen early this week. He declined to divulge details of the meeting.

"I definitely have concerns," he said. "He's won a lot more money with us than with any of the other tours. We need to get to the bottom of this and get it taken care of because I represent 3,000 people, not one person. I just don't want to see an innocent person convicted or one who's guilty walking free."

Tormanen has also made a mark in FLW Outdoors events, but not to the same extent. In 17 tournaments since 2002, he's pocketed $14,537. He won the 2004 Ozark BFL at Truman Lake by a 4-11 margin and was 5th at this year's Lake of the Ozarks Central EverStart.

BassFan has been unable to obtain a comment from FLW Outdoors.

> BassFan tried to contact Tormanen for comment for this story, but messages left at his work and cell-phone numbers were not immediately returned.

> Huckabee finished 52nd in the Red River Open with two limits that weighed a combined 14-12. He was 73rd in the final Central Open points.

> Huckabee said the tethered fish weighed about 3 pounds and was attached to 4 or 5 feet of braided line.

> The Coushatta launch is about 25 miles from the Grand Ecore launch, where weigh-ins were held.