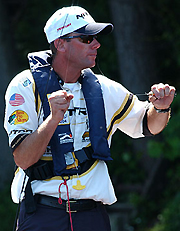 There's no stopping Kevin VanDam – the most dominant angler, by far, of the modern era.

It's not like Kevin VanDam needs to prove anything. He's already regarded as the best angler in the world, and 2 weeks ago at the Lewisville Bassmaster Elite 50, he reminded everyone again just how good he is under a tough set of conditions. But to take that win, come north to the Wissota E50 in Wisconsin and do it all over again – under tougher conditions yet – proves just how far above the rest he is. He's on a different level – not just a cut above the rest.

He won two of the four E50s this year, and has made every Top 12 cut in the eight E50s ever held.

Under excruciating conditions, where only three limits were weighed the entire tournament, KVD pulled out another rabbit. He ran with what the lake gave him and milked the northern smallmouth bite for every ounce possible. His three fish today, combined with his four yesterday, gave him a total weight of 14-12. He finished nearly 3 pounds ahead of 2nd-place angler Davy Hite.

Hite made a valiant run today and bagged four fish for 8-12 (12-00 total), but he wasn't even close. Zell Rowland had two today for 4-01 (8-11 total) and finished 3rd. Shaw Grigsby weighed one fish today (1-04) which put him in a tie with Takahiro Omori, who zeroed today. They both finished with 6-13 total and received equal points. Jay Yelas blanked today and finished 6th with 5-05.

Details of VanDam's winning pattern, and patterns for the other top finishers, will be posted soon.

"This is great, to come from 6th place yesterday to 2nd today," Hite said. "I actually thought I had a chance to win this thing, but it was a pretty farfetched thought. All I needed was one more fish, but that fish would've had to have been a good one.

"The best thing is I qualified for two (Bassmaster) Classics," he said. "Before I came here, it was touch-and-go. But I made my number-one goal and that makes me happy."

"Yesterday I went into the hole course thinking I'd stick with my smallmouth pattern, but I had to change quickly. I found some shallow fish yesterday and ran with that today. It paid off for me."

He weighed the most fish today (four). He also picked up on something the others didn't. "Hole 3 was a deep creek," he said. "I noticed that nobody went way back into the creek, and it had the type of water I needed to catch my fish.

"I went way back in and got two keepers. Then, during happy hour, I went back in there and got my final two fish. I really thought I could pull a limit out of there, but it just didn't happen."

"These fish got hammered yesterday," Rowland said. "You can't put 12 of the best anglers in the world on a course like this and not expect that to happen. It was a great event though, and I'm happy to have been able to participate in it."

He started off fast and figured it'd be an easier day today. "I went right to my best spot first thing this morning and flipped a tube into some brush that was overhanging a riprap wall," he said. "I got one real fast, and then caught another by skipping a worm underneath a dock.

"I had two fish real quick and thought it'd be easier than yesterday. Six hours later, though, I found out I was wrong.

"I just want to say how impressed I was about the people here this week," he added. "It's been a long time since I've seen people this courteous. Even though the fishing wasn't that good, I'd love to come back."

"Kevin (VanDam) did a great job this week," Grigsby said. "The best man definitely won. If ESPN has another Greatest Angler Debate in the future, Kevin will undoubtedly win. He's just a bit too young right now – but he's still the best.

"These people here at Wissota are by far the best people I've ever been in contact with," he added. "I had the best time I've ever had at a tournament. The fishing was tough, but I'd come back tomorrow just because of the way we were treated this week."

He had a tough day today even though the fans were awesome. "It was just a tough tournament altogether. There's no doubt about that. I had a frog pattern going yesterday that gave me three fish and I stuck with it today.

"The frog bite died, though, and I ended up catching my one keeper today on a wacky rigged Strike King 3X Zero. I had another fish on but lost it. Between the two fish I lost yesterday and that one, I could have done a lot better. But it just didn't happen that way."

Omori was one of few who actually had a pattern on the main lake that held up in the hole course. Unfortunately, his pattern dried up today.

"I've been fishing two baits all week, and it worked for me until today," he said. "Yesterday I had two largemouths and one smallmouth and hoped I could do better today. It just didn't happen.

"Today I went out for the big fish only. I targeted largemouths all day and caught three non-keepers and three musky. It was really tough after all those good fishermen attacked the hole course yesterday.

"This is my first E50 Top 6 finish and it feels great," he added. "It's tough to compete against these anglers. These guys are the best there is."

6th: Yelas Should Have Zigged

"Yesterday I spent half of my day on largemouths and had to change," Yelas said. "As soon as I changed and went for smallmouths, I got two. I went out today with the notion I'd only target smallmouths and I wonder if I made the right decision.

"It's hard to tell though," he noted. "Davy (Hite) weighed in all largemouths today while Kevin (VanDam) weighed all smallies. I think it just had to do with making the right moves at the right time. And Kevin has been doing that. He's on a roll."

Yelas was also impressed with the people of the Chippewa Falls, Wisc. area. "We need to come back to Wisconsin," he said. "These people were so glad to see us. They made us all feel very special."

> Hite's happy for VanDam: "I just want to say that my friend and roommate, Kevin (VanDam), really deserved this one," he said.

> Hite has now made 12 Classics out of the 14 years he's fished professionally. "Twelve out of 14 ain't bad for a rookie," he said.

> "I really owe a lot to Kevin for my finish," 3rd-place Rowland said. "Kevin knew I had to make the cut here to make the Classics and he helped me out after my blank on day 1. Without him, I don't know if I would have made it."

> Final Classic qualifications will be listed when officially announced by BASS.