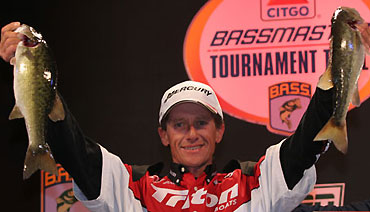 Kevin Wirth worked two patterns, but in the end had to fall back to his dropshot limit-getter.

Last year's Tour event at Smith Lake was mostly a deep-water finesse affair, made tougher by some of the worst weather in the history of BASS. In contrast, this year's E50 turned out to be a sight bite for

most anglers – at least for the first 2 days of competition. Yet bad weather did eventually roll in, which forced a change-up on days 3 and 4.

Mark Davis won the event with a day 3 and 4 total of 24-14. His winning pattern will be up soon. Until then, here's how the 2nd- through 5th-place sticks stuck their fish.

Kevin Wirth relied on fish he both could and couldn't see.

"In practice, I went out with the thought I'd target largemouths in dirty water up the creeks," he said. "But after a day of that, I didn’t feel there were enough fish to do any good.

"So I went and found a dropshot pattern for spotted bass in a little deeper water and figured I had two patterns to rely on – one for a limit and another for a kicker fish.

"On day 1 of the tournament, we were all around the launch waiting to start and I saw a bunch of fish bedding," he said. "I was boat 28 out and decided to start right outside of the no-fishing zone. By the time they called out boat 36, I had my first keeper in the boat.

"I just continued down the bank for about 4 miles and caught 3 or 4 limits that day. I did the same thing on day 2."

But things changed on day 3, when the tournament was delayed 1 hour due to weather.

"On day 3, I tried to run my largemouth pattern – pitching tubes to laydowns and logs in the backs of pockets," he said. "I caught a fish right off in my first hole. But in the next three holes, the fish wouldn’t bite for me. By the time I got to the fourth hole, I realized I had to revert back to my spotted bass pattern."

The change made all the difference. "In the last two holes, I ended up with my limit and culled two fish. I caught eight or nine keepers that day."

> "My dropshot pattern consisted of red-clay pockets and points with chunk rock. I'd cruise the bank fast looking for fish, and fish the dropshot rig in front of the boat. I I'd pitch the rig out, let it hit bottom and then lift the rod. If there wasn't a fish on it, I'd reel in and pitch it again."

> Main factor in his success – "I adjusted well all week and stayed with what worked. Plus, I didn't lose many key fish." 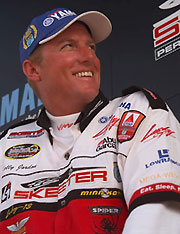 
Kelly Jordon switched to a Sammy and Pointer when the wind arrived.

Kelly Jordon had to change each day in order to catch his fish.

"In practice, I had fish on a number of different baits," he said. "They were eating jerkbaits, topwaters, a Lake Fork (Tackle) Baby Fork Craw and the floating worm really well. I concentrated on main-lake points and pockets and would just go until I found cruisers or bed-fish.

"When the tournament rolled around, the jerkbait and topwater fish wouldn’t eat and I had to rely on the trick worm and Baby Fork Crawthe first 2 days.

"The weather change on days 3 and 4 made it difficult to fish the trick worm and I had to switch back to the jerkbait and some topwater. I'd throw the reaction baits as I covered water looking for fish."

> Main factor in his success – "I was able to change with the fish and worked hard all week." 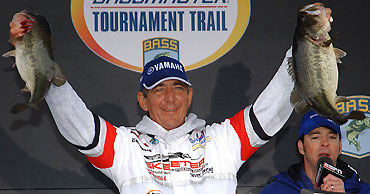 Zell Rowland was the only angler in the Top 6 who relied mostly on the topwater bite.

"I found a pretty solid topwater pattern in practice," he said. "The fish were on main-lake banks that had a shelf that came out 10 to 15 feet from the bank and then dropped into 30 to 50 feet of water.

"The fish were either on top of the shelf next to the break, or they were suspended over the deep water near the break."

He caught all his fish the first 2 days on a Heddon Super Spook. "The topwater bite wasn't that good, but when you caught a fish, it was a good one," he noted.

He said had to change a bit in the course. "The course didn’t have much of my type of water in it. I ended up throwing topwater where I could, but when I got to hole 6, I went to flipping a tube in the buckbrush. I caught two tube fish on day 3 and on day 4 lost three fish (on the tube) that would have won it for me."

> He targeted spotted bass with the topwater bait and largemouths with the tube.

> Main factor in his success – "Sticking with what you have confidence in. There aren’t many guys that can fish topwater all day for 5 to 7 bites and maintain their confidence." 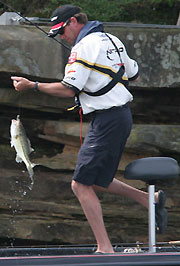 
Kevin VanDam lost his patterns when the tough weather set in.

Kevin VanDam sight-fished on days 1 and 2 – and led the tournament both days – but had to rely on his power-fishing skills on days 3 and 4.

"In practice, I'd located a number of cruising fish and bed-fish on main-lake banks and small cuts," he said. "The fish on the main lake are always the last to spawn, and I figured that would be the best place to look for them at this tournament.

He weighed a little over 20 pounds on day 1. "On day 2, I knew I wouldn't be able to weigh that kind of weight, but continued with my sight-fishing pattern on the main lake."

He tried to run the same pattern on day 4, but it ran dry.

"The weather on days 3 and 4 made it tough to sight-fish and I had to change," he said. "I only caught two sight-fish during the last 2 days. The rest were on a jerkbait."

> He caught most of his sight-fish on tubes.

> Main factor in his success – "I didn't succeed."