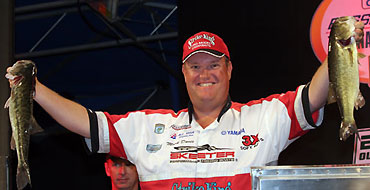 temperatures. Last year, Smith Lake delivered some of the worst conditions in recent memory, and today's conditions were so bad, the Top 12 was held back at the dock for an hour.

Even with the shortened day and bad weather, Mark Davis was able to pull out some of his E50 mojo. He won two of the four E50 events last year, and he took the lead today with a 13-06 limit. But the field is tight, and he's only 2 pounds ahead of the 6th-place cut position.

Here's who didn't make the cut:

With the tight weights posted today, it could take only one big fish in a typical Smith Lake limit to make anyone a hero.

Fishing today took place in within six pre-allotted "courses." Due to the weather delay, anglers only had 1 hour to fish each hole (rather than the normal 70 minutes).

"This course turned out to be better than I thought it would be," Davis said. "I went into today thinking we'd be on the worst water in the lake, and I sure was wrong."

His day didn't start out that good though. "I started the day with a broken trolling motor," he said. "The variable speed wasn't working and all I had was high bypass. I had to find a spare boat and swap all of my tackle over. This all happened 10 minutes before we headed out. I was pretty worked up.

"When I got to my hole, the fish calmed me down pretty quick," he said. "I had my limit in the boat within 30 minutes. That really gave me some momentum."

He had to change up his tactics. "I've been throwing a floating worm for the entire tournament. But with the storms and wind today, I switched up. I caught a couple of fish on the weightless worm again, but most of my fish came on a jerkbait and a spinnerbait.

"Tomorrow will be a different day though. The wind is supposed to pick up hard and that'll make the finesse bite really tough. I'll keep doing the same thing I did today and hope for the best.

He noted he caught 12 keepers today.

He starts the day tomorrow in hole 2 – the same hole he caught his early limit in today. 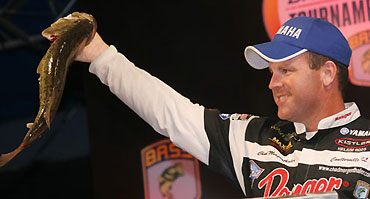 
Chad Morgenthaler said that, because of the delay this morning, he rushed through his first three holes.

Chad Morgenthaler retained his 3rd-place standing today, but it wasn't as good of a day as he'd hoped.

"The day went weird," he said. "We had horrible weather this morning that caused a delay in the start of the tournament. That cut our day down and it made me rush through the first three holes.

"I knew I had to settle down and fish, and by the time I got to the second hole, I finally relaxed. Tomorrow will be better now that I know what to expect."

His first fish didn't come until later. "I didn't have a fish in the boat until after noon. I caught it in the second hole about 15 minutes after getting there. That fish made me slow down and concentrate on what I had to do."

Asked his opinion of the course holes, he said: "The course isn't too bad. There's one bad hole but the rest of the holes all have fish. Some have more than others and now I know where to concentrate my time tomorrow.

"I'm still throwing the finesse worm at docks and secondary points," he said. "I'll stick with it tomorrow. I won't waste any time looking for bedding fishing like I did this morning."

Rowland, in 4th, said he's got something. "I'm doing something different than everyone else. The bigger fish just aren't staying hooked. I had the chance today to blow this tournament wide open and I let it slip."

He said he's fishing topwater. "The fish are eating very well for me and nobody else is on it. I'm just fishing as fast as I can.

"I learned a lot about the course today," he said. "There's a lot of dead water in the holes and I figured out where that water is today. Tomorrow I won't waste any time."

He starts out in hole 4 tomorrow.

"The fish changed today with the weather," he said. "I've been concentrating on sight-fish this whole tournament, but the weather change today seemed to make the fish bite a little more aggressively. When that happened, I went to some different baits and they ate them."

He found some areas today that had some good fish in them. "I saw a lot of really nice fish today. If the wind doesn't blow tomorrow, I could weigh some big weight. If it does blow, I hope I can get them to eat."

He lost two big fish today. "I lost a 4-pound spot and at least a 5-pound largemouth today. With just one of those fish, I would've been in the lead."

He starts out in hole 6 tomorrow. 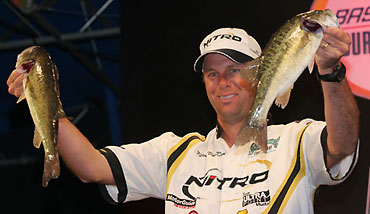 
Kevin VanDam mixed it up today, but saw some fish he'll throw to tomorrow.

Kevin VanDam led the first round of the tournament, but fell to 6th place today.

"It was tough out there today," he said. "I scratched a limit and that was about it.

"I learned a lot today and feel that the weather change tomorrow can help me a lot."

He sight-fished the first 2 days. "I'd been sight-fishing the last 2 days and that didn't pan out for me today on the course. My first two fish came on beds, but after that, I just fished hard.

"I saw some fish today, though, that if I can get them to bite tomorrow, I'll be happy. The weather change has me pretty excited."

"I'm throwing a hodge-podge of lures. I'll tell you what I'm doing tomorrow."

He starts off tomorrow in hole 5.

Jay Yelas finished in 7th place today and missed the cut by 2 ounces.

"I started in hole 6 today, which I thought would be good for me," he said. "It looked like the best largemouth water on the course, and I had planned to concentrate on largemouths the rest of the tournament.

"The first two fish I hooked in there, though, I lost. That hurt me.

"One of them was a 3 1/2-pound largemouth. I pitched a tube into some buckbrush and was reeling it out when I saw the fish swirl on the bait. I set the hook too fast and didn't get a good set.

"In these tournaments, the caliber of the fishermen is so high, you can't make little mental mistakes like I did today. You have to be on."

He had to change tactics today. "I went out this morning with the idea I would concentrate on largemouths all day. But after I got to my second hole, I realized I'd have to switch up and fish spots.

"I pulled out my spinning gear and 6-pound line and started fishing a Berkley Power Worm on a jighead. It almost paid off for me."

> Davis stressed his opinion that pros should use only their own boats – not sponsor-wrapped boats provided by BASS. "Ten minutes before the start of the day, I noticed my trolling motor wasn't working," he said. "I had to drag the boat out of the water, find a spare and transfer all of my gear. That really hurt my attitude this morning. As pros, we really need to be in our own boats for the entire tournament."

> Rowland is happy so far. "My goal for this tournament was to come here and finish high and I've done it. I feel good about Dardanelle and Lewisville coming up and I just want to make the (Bassmaster) Classic. This tournament is giving me a good start. It's been a fun time."

> The weather forecast for tomorrow shows 30 mph winds and temperatures around 60 degrees.

The following anglers did not make the cut and will not be fishing tomorrow: