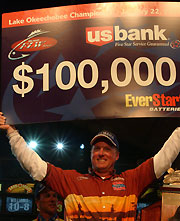 A series of low weights on day 3 made Okeechobee seem like a powder keg perched precariously close to an open flame. Today, Kelly Jordon took that flame in hand, jammed it into the heart of the powder keg and in one 30-minute stretch lit up the lake with an intense display of what he said was, "The best 30 minutes of fishing in (his) life."

Along a single stretch of floating mat he boated a 7, a 2, a 6 and then an 8 to dominate day 4 of competition and walk away the FLW Okeechobee winner by a margin of more than 4 pounds.

The field was held back for about an hour this morning under a fog delay. It was a short day to begin with – anglers had to return by 2:00 – so at best the field had approximately 5 hours to fish. The fog eventually burned off to reveal a warm, clear day with little to no wind. The spinnerbait bite died again which meant today was all about flipping.

Jordon, currently ranked 10th in the world, has enjoyed his share of Bassmaster success. But this is his first FLW win. It also marked his first appearance in an FLW Top 10.

"To finally get up there and win – it's incredible. That whole weigh-in is intense and let me tell you, it's a different place.

"Heck, I was nervous. I didn't know if I'd won. I knew Steve (Kennedy) had them, and he did. I thought it would come down to ounces because I didn't have a fifth fish. I thought that would ruin the whole deal. It made it pretty exciting.

"It just blows me away. It's just like Santee-Cooper when I won the Bassmaster. I was 7 pounds back and won it. I thought there was no way I could come back 10 pounds today, so I just went fishing. I fished hard with no expectations and no pressure."

Details of his winning pattern will be posted soon.

> "I've always been the guy back working the Yamaha booth, watching the finals," he said. "When I was up on stage, I didn't know what to say. I was so amazed by the experience. I felt kind of like a deer in the headlights. (FLW's) got that stuff down. The show was pretty amazing."

"It was incredible to see the fish that (Jordon) pulled out," Kennedy said. "He had four fish and the last one he pulled out was an 8-something. So he smoked us. My hat's off to him. He's the man."

Kennedy said he originally thought the fog delay would help him. "We had such a short day with the fog delay, I only had 4 1/2 hours of fishing time. I thought that would play into my hands.

"I caught an easy limit. I caught four fish out of one mat as quick as I could flip in there. But I never got a big bite. It's been taking all day to get a big bite. For (Jordon) to get three in 4 hours in incredible. 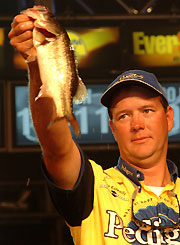 
Steve Kennedy flipped again, but couldn't get the big bite he needed.

"The wind did not do much of anything today, and all morning it was bright sunshine and no wind. That wind usually sets up current and the bass can get on points to feed. That never happened today for me.

"I'm extremely happy with 2nd. I'd have loved to have won. There's only around 10 guys who have won two of these things, so winning would have put me in some elite company. But I'm ecstatic.

"To be in 2nd is great. I've had opportunities in the past to do as well, but I didn't capitalize. I can't think of a big fish I lost that would have really done it for me. I'm definitely happy with my performance today."

He said he flipped a Gambler BB Cricket the entire time. Details of his pattern, and patterns for the other top finishers, will be posted soon.

> His prior FLW Tour win he alluded to was in 2003 on Kentucky Lake.

Rojas didn't have his best day today. "I feel excited, and obviously disappointed also," he said. "I'm very disappointed on how I finished out, but I'm excited about how I performed all week.

"All my fish came into the boat. Today I just didn't get the bites I needed."

He told BassFans yesterday he might start with a topwater today. "We were held up for an hour, but I got to my area, fished in the fog for a few hours and got one on the topwater bait – a Luhr-Jensen Fish Stick.

"A team tournament was going this morning, so when I got into my area there were so many boats in there. That made it a little tougher."

Aside from his topwater fish this morning, he said he flipped the entire tournament.

> He fished the Monkey Box. He said Jordon, Kennedy and Namiki were all within sight.

Namiki spoke limited English, but said he was happy with where he finished. "It's great for me. I'm really glad."

He relied on three baits – a rattlebait and two different Texas-rigged soft plastics.

"The thick cover was important for the big fish," he said. "It is important to never give up."

Bolton said he was glad to break his bad-performance steak on Florida fisheries. "I feel great, considering last year. I think I finished about 169th then. My record in Florida has never been very good.

"I feel real good about my tournament. For once, I had a tournament where I didn't outthink myself – I just fished."

"I'm really excited. I didn't win, which of course was the ultimate goal. But I'm really proud of my performance and I didn't lose any bites. I fished about as good of a 4 days as I can ever remember."

Bolton spent the tournament in South Bay, alongside Keith Williams. "Yesterday I only had five bites, and I caught all five. The water started pulling back toward the north end of the lake and it went from a foot of visibility – when the fish were biting good – to 3 or 4 inches today.

"People say you can't catch them here in dirty water. You can, they just don't bite real well."

Bolton took the power-fishing approach and relied primarily on a spinnerbait the final 2 days.

"I didn't have a real good practice," Williams said. "I didn't get on the flipping bite, so I went out on day 1 with an open mind and tried to build on what I had going. It all worked out.

"I'm happy with how I finished, even though I had just two fish today. It was a tough day."

He said he didn't flip much. "I just wanted to catch a limit today. I was moving, throwing and winding. I flipped a little bit, but my area wasn't right for flipping."

His main baits were a gold-and-black 1/2-ounce Rat-L-Trap and a white 1/2-ounce Strike King spinnerbait. He fished gold blades in the sun and white blades in the mornings.

> Greg Pugh finished 6th. "I feel good with how I finished," he said. "I would've liked to get to the top, but I didn't get the bites the last 2 days. I'm satisfied with where I'm at and just happy to be in the Top 10."

> Jerry Green zeroed on day 3 and changed it up today. He did a little better (one fish) and finished 10th. "I feel great," he said. "It was a lot of fun and a real good learning experience. It's my first Top 10. It definitely felt different – it's a whole different ballgame."