Clausen Rides Again; Can He Do It Tomorrow? 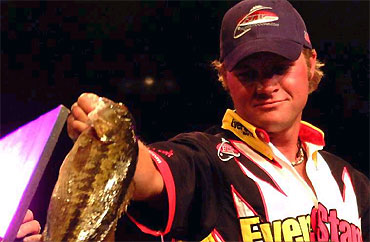 Luke Clausen beat the rest of the field today. Can he do it again tomorrow?

Spokane, Wash.'s Luke Clausen, a rookie on the FLW Tour this year, is hammering the bass at the FLW Tour Championship on Lake Logan Martin. He's had a big bag every day, and had the biggest bag of the day on 2 of the 3 days: day 1 (14-04) and today (14-03). If this was a cumulative-weight tournament, he'd be the man to beat. But he's still the man to beat, even though everyone starts at zero again tomorrow.

With conditions forecast to be similar – sunny with a mild wind, like it was on day 1 and today – it looks like he has a $500,000 tournament by the tail. But he's a rookie who's never fished for this kind of money before. Can he handle the pressure? Or: Will this Luke have a cool hand again tomorrow?

If some of them can light a fire under Clausen like Greg Hackney did today, Clausen just might win. "I was really scared I was going to be a victim of the Hack Attack today," Clausen said. He fished new water like a mad man, and for some reason his topwater and dock-flipping patterns (standard patterns right now) are producing better fish for him. BassFans will have to wait until tomorrow to find out his secret, if he has one. 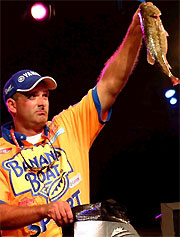 But every day has been different on Logan Martin, and no one is conceding to Clausen just yet.

Vida caught 15 keepers today, and his best five weighed 12-06 (the second-highest weight today), besting Tracy Adams' 8-10. "I caught more than I've been catching," Vida said. "Usually I'd expect around 10 keepers. But the sun came out and the fish got tighter to what I was fishing and made it easier to catch them."

He's fishing two different jigs: a Hildebrandt, and a Berkley Power Jig. "I'm swimming one and fishing the other on the bottom," he said.

Gagliardi had the third highest weight today (12-03) to get past Dean Rojas, who weighed a limit of 9-06. "They didn't bite as well today," Gagliardi said. "I had to move around some. But if it all comes together tomorrow, I think I can catch them again." He said he's dropshotting to catch his fish.

"It's been tough fishing this week. I'm proud I've been able to catch (enough to keep advancing), and that my weight has increased every day."

"I didn't have a keeper at 10:30," Martin said. "I just prayed a lot and caught some good fish later. The Lord took care of me today." He ended up catching 8 keepers.

"Most of my fish are biting after noon. If I can figure out how to catch a good bag in the morning, I'll feel pretty good. I'm throwing jigs on docks, and if I can get some bonus fish in the morning, then a 15-17 pound bag is possible.

"I caught three of my best fish in the last hour on five docks, so I need to spend more time on those tomorrow," he added. "With the sun out, that helps that pattern. The fish will suspend and position on the docks."

> Yesterday he used a jet boat to go way back in a major creek where no fiberglass boat could go. "I was confused about what days we got to use our own boats," he noted. "I'd thought I would get to use the jet boat again today, and let my main-lake stuff rest." But today's competitors had to use FLW sponsor boats, and Martin had to fish areas he'd hoped to save for tomorrow. 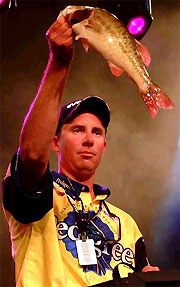 Browne, also a rookie this year, caught 11 keepers today and ended up with 9-08. He barely edged Mark Hardin, who had 9-00. "That was close," Browne said. "I was nervous as we weighed in. I knew it was tight when we were talking in the weigh-in line.

"I caught more (keepers) today than I have been. I'd been fishing the same area every day, but today I moved to where some better fish were. I only got to fish an hour and a half there before I had to go in." He's catching them mostly on a shakey-head jig with a Gambler Icesickle worm, but his better fish hit a Gambler Ninja Jig.

"I'm excited about tomorrow," he said. "I found something today where I got those two bigger fish, and I broke off a 5-pounder there too. I'm going to fish as hard as I can and have fun with it. I'll go catch five little ones real quick, then go to the big-fish spot a lot earlier than I did today." He thinks he'll need 13-15 pounds to win.

Kilpatrick caught about eight keepers today, and his limit of 8-13 was enough to get past David Walker's 7-11. The key for Kilpatrick was throwing the gameplan out the window.

"I thought the sun and wind today would help the shallow dock bite I was on, but it was dead," he said. "About mid-morning, my gut told me to just go practicing, but I waited until 1:30 before I did."

He'd been driving by some areas that looked good to him, but which didn't fit the mold of what local wisdom says you have to do to catch fish this time of year on Logan Martin. But they did fit what he likes to fish down in the Mobile Delta area. "I went over there and culled four times," he noted. "I threw a keeper in the boat on my last cast, and ran back with only 20 seconds on the clock.

"I'm just running to every spot that looks right. They all have the same three ingredients, and when I find them together, the fish are there.

"I may have found the fish I can win on. It's a real Godsend when you find fresh fish this late in a tournament." He plans to work them all day with his homemade jigs.

He thinks maybe only 12 pounds will be needed to win, since "it's a pressure-cooker of an event, and there will be a lot of boats out there tomorrow. Spectator traffic might be murderous. I had 6-7 boats following me when I wasn't even catching anything."

Millsaps caught 8 keepers today, but his best five weighed only 7-12. It was enough to ease past Matt Herren's 3-15, but not what Millsaps was hoping for. "I had a couple 19-pound days in practice fishing humps," he said. "I don't know where they went. The weather's changed, and the water temperature has dropped 9 degrees (from practice). The cloudy skies and cooler temperatures hurt me.

"I feel like I dodged a bullet. I thought I messed up today – I let two 4-pounders get off. It might have even been the same fish twice. I broke one off and went back to the same place 2 hours later and lost another. I must've had a bad place in my 20-pound line. Maybe I can catch one (of them) tomorrow. If I do I may find my jig still in his mouth."

On tomorrow, he said: "I have some areas that I can go to, but I'll have to relocate the ones I found in practice to win." He's catching fish on a Texas-rigged worm, a Blademaster jig, and a Suddeth crankbait, and thinks the winner will have about 14 pounds.

Crews caught five squealers today for 6-14, but inched past Chris McCall's 5-06 to survive another day. "I made it to the final round with low weights again this year," he said. "It's just the luck of the draw, I guess. I had a good bag the first day, so maybe I can catch them again tomorrow."

He's using a Carolina-rig, a jighead worm, and a Luhr Jensen Speed Trap to catch his fish, and has some deep and some shallow areas producing. "My better fish have been off the bank, so I'll crank a bunch tomorrow," he said. "I think I'll need 13-14 pounds to win."

> He noted that "a lot of boats will be on the water tomorrow," including a 60-boat Angler's Choice tournament that goes out an hour before the championship competitors do. "That may cause problems for some guys." 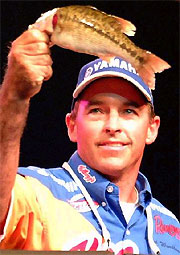 
Lucky for Clark Wendlandt, he gets to start at zero again tomorrow.

Wendlandt's 5-08 limit gave him 21st-best (or fourth-worst) weight of the day, but because Brent Chapman had only 4-07, Wendlandt is fishing tomorrow. Not surprisingly, he said his day today was merely "okay. I had only two big bites and I lost both of them. I'll have to catch all my bites to win."

The weather has been cloudy and then sunny, and the water has gone up and down a few inches, but he said the conditions aren't affecting his bite. "I'm just running and gunning," he said. "I hope it works for me tomorrow. I'll need 12-14 pounds to win." That might be a challenge, since he hasn't caught that much on any one day of the tournament so far.

> Conditions were sunny from the start today, Friday the 13th, which was lucky for those anglers who needed bright conditions to position their fish on docks, brushpiles and river ledges. It wasn't so lucky for competitors who had better success yesterday under cloudy conditions, targeting more scattered open water fish with spinnerbaits and crankbaits. The wind also got up a little today, but most anglers said it didn't really affect them.

> Spectator boat traffic came into play a little today, with competitors having about 5-7 followers each. Spectator traffic may be a new factor tomorrow. It's Saturday, the weather will be nice, only 12 competition boats will be on the water (so more spectators per angler), and the amount of talk the $500,000 1st-place payout has been generating locally might get more people out for a look.

> To see how BassFan Army co-angler Chris Koester did today, click here to go On Tour With him.

> Ranger unveiled their new Comanche Z-Series boat after the weigh-in today. Up close it's a sleek machine. For more on that, click here.

Here's the forecast from The Weather Channel, a little breezier and cooler:

Although places 1-12 are ordered here by weight caught today, they are equivalent as all start at zero tomorrow.

The following anglers didn't win their brackets and won't be fishing tomorrow:

Match-ups that were less than 1 1/2 pounds apart are in red.