Cold Front? Just Shake It Off 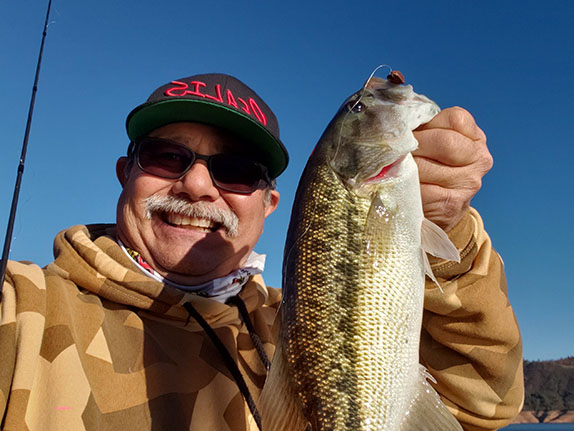 You couldn’t ask for a better endorsement. Sure, there are lots of ways to promote a new product, but none so impactful as "the dub."

Western stick and former Bassmaster Elite Series competitor Greg Gutierrez recalls just such a breakthrough moment for the shaky-head he calls the Frenzy Nail; one that offered a shining example of the presentation’s post-frontal effectiveness.

“In 2016, when the Nail first came on the market, we had a huge storm come into Northern California the week I was fishing the (Toyota) Series event on Lake Shasta,” Gutierrez said. “During practice the fish were being caught on jigs and swimbaits. As the water came up 3 feet, I switched from a jig to the Nail.

“I hammered them and won by a margin of just under 5 pounds."

No stranger to the “jig worm” technique, Gutierrez said he felt confident his bait could hold its own – even in tough weather conditions. However, a dominant performance offered a resounding cheer for not only the Nail, but the technique’s irrefutable results.

In 2013, Gutierrez bought Frenzy Baits from friend/founder Ryan Habenicht, who had recruited him to help with bait design. Three years later, Gutierrez introduced the Nail – a bait that allowed him to maximize his vision of the shaky-head’s potential. 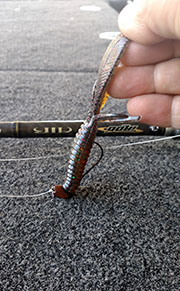 
Gutierrez originally designed the Frenzy Nail for maximizing the action of a Reaction Innovations Sweet Beaver.

Interestingly, his original plan was to create a shaky-head to be used with a Beaver-style bait. Seeking a way to present those enticing creature baits in a static presentation, as opposed to the in-and-out of flipping and punching techniques, he settled on the flat-bottom jig that quickly turned into a killer finesse worm setup.

“I was never really happy with one style, so I carried several different (shaky-heads),” Gutierrez said. “I wanted more of a bait that would stand up. I found that ball head-style shaky-heads and most others would lay back. That didn’t really give them that in-their-face effect.”

Gutierrez also found that round ball heads would not consistently navigate grass or craggy bottom without fouling or snagging. He created his own solution by pouring an existing jighead style and filing it down until he achieved the form that would become the Frenzy Nail.

“This stand-up profile really shows off a bait and keeps it in the fish’s face,” Gutierrez said. “Also, the chiseled face allows the Nail to come through cover easily, while the recessed line tie protects the knot from rocks and quagga mussels.”

Gutierrez said he also wanted a barbed hook keeper that would hold heavily salted baits in place without ripping them on hard casts. Particularly in this slow, methodical presentation, a marred bait alignment means a wasted cast.

“Or, if I get bit and I make a hook set and miss it, I can just kill the bait and it will go back to where I was fishing it,” Gutierrez said. “A lot of times, they’ll eat it (on that drop back). That maximizes my time because I don’t have to worry about a bait balling up on a cast or on a missed hook set.

“That has been one of the biggest time-savers for me. That is key (especially) with spotted bass.”

As Gutierrez explained, the shaky-head presentation is one of his go-to techniques for handling post-frontal conditions and other challenging scenarios. Main reason: easy pickings. Baits moving faster than a fish cares to pursue typically get the eye roll, while something subtle that maintains an enticing, vulnerable position becomes a much easier sell. 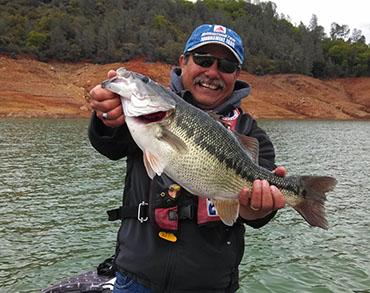 “It’s not a super-aggressive deal,” he said of the bait’s inherently subtle look. “During post-frontal conditions, usually the strike zone gets smaller. The fish are not going to run out 10 or 15 feet to get a bait like a swimbait, a spinnerbait or a jerkbait.

“A shaky-head allows you to get into that strike zone, or close to it and stay in that area for a longer period of time and then, they’ll just ease over to it. Because it’s standing up in their face, they’re more likely to eat it.”

During his Lake Shasta win, Gutierrez saw the storm’s onset shut down the jig bite and severely limit the swimbaits that had been producing. Exemplifying a key drop-back strategy, Gutierrez surmised that with waves crashing the bank, his fish had likely retreated to the first drop.

His intuition proved accurate and he ended up catching a bunch of them by casting his nail into 1 to 2 feet of water and working it off the drops into 10 to 15 feet. As Gutierrez notes, the fish could simply sit below those drops and feed in relative leisure.

Gutierrez fishes his shaky-heads on a 7'1" medium-action iRod with a soft tip but good backbone. As with any buried-hook technique, you have to work that point through the plastic, so a healthy dose of power to complement the presentation sensitivity is crucial.

“I use 15-pound Finns Spin braid with 6- to 10-pound Gamma fluorocarbon leader,” Gutierrez said. “I set the hook hard and that fluorocarbon is super impact-resistant and abrasion-resistant. Also, I can throw lighter line and not worry about the spotted bass' teeth."

When it comes to shaky-head sizing, Gutierrez has tried most weight options and found the 1/4-ounce size his comfort zone. With this weight, he knows he can pin his bait to the bottom and efficiently cover vast areas smattered with wood, rock and grass.

Using Shasta as an example, Gutierrez notes the importance of working with the wind when dragging a shaky head across points. He’ll cast into the wind, work his Nail toward the leeward side and feel for every little depression or hard spot where a fish could be holding before walking the bait into the deeper, protected water.

“The bait is pushed over a windblown point and the bass are sitting down there waiting for food,” he said.

When he’s fishing a post-frontal scenario on the California Delta, Gutierrez expects to find fish holding in the “trough” between riprap banks and adjacent grass lines. The fish tuck into the grass on falling tides and move closer to the warmer rocks when the water returns.

“I’ll pitch the Nail up there, work it down that riprap and walk it down to the base of the grass,” Gutierrez said. “A lot of times, I’ll get hammered right there. My biggest fish doing that was 13 pounds.

“On Clear Lake, when fish are up in 3 to 4 feet, you’ll work the rock piles down to that little grassy area where the silt starts accumulating in about 10 feet. It’s basically the same thing (as the Delta troughs) where I can work around grass and rocks where the Nail navigates quite well.”

In this, and just about any other scenario, a bait that smoothly navigates potentially problematic habitat, holds its ground and shakes its backside in a fish’s face will often earn bites in the toughest of conditions.