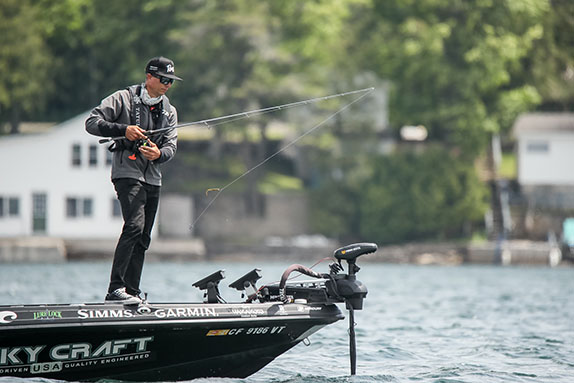 Brent Ehrler made the long drive home from Texas to California with several internal injuries incurred after crashing his mountain bike.

Major League Fishing competitor Brent Ehrler is recovering at home in Southern California from injuries suffered last week when he crashed his mountain bike on a trail in Dallas. He was in Texas for an MLF Cup event and went riding on an off day.

The wreck resulted in a collapsed lung, broken ribs and some extensive bruising. He drove himself home from Dallas and didn't seek medical attention until 5 days later.

"I wasn't smart about it," he said. "I got back one afternoon and just sat on the sofa, then the next morning I went on a walk with the dog and when I got back, I told my wife (Kelley) that I was going to Urgent Care. I'd broken ribs before, so I knew what they felt like."

X-rays revealed what he suspected – and also the collapsed lung. He said that a doctor wanted to rush him to an emergency room immediately, but relented and allowed Kelley to drive him there after learning that the injury was already several days old.

A 7-hour stay at the emergency room included more X-rays, a CAT scan and other procedures.

"What happens is the ribs puncture the lung and the lung spills air into the chest cavity and then the lung can't fully expand," Ehrler explained. "Because of the time that had already gone by, they decided they'd rather wait right now and track it rather than put a chest tube in, which was great because I've heard that chest tubes are miserable. In a way, it's good that I waited because if I'd gone right in they would've put the chest tube in right away.

"I was able to go home that night and now I'm just trying to lay low. I'm in a lot of pain and I'm short of breath. I've walked a few times, trying to get the lungs to start working. It seems like I've got a certain amount of oxygen I can use every day and when I've gone through that, I'm done."

He'll go in for a check-up next week.

"At this point I just need to let everything heal and hopefully it's progressing the right way. I'm thinking that I'll be back to exercising within a couple weeks – that's the game plan, anyway."

The wreck occurred at a park that's renowned for its single-track (a mountain-biking term for a narrow trail, often containing difficult technical features). He hit a section with several consecutive jumps and went over the handlebars when he mistimed one of them.

"I went straight down on my shoulder, my side and my back," he said. "I got up, but I couldn't ride and I couldn't breathe."

He was able to push the bike back to his truck and make the 30-minute drive to his hotel. But after sitting for that long, he was barely able to move after he arrived. Skeet Reese helped him get to his room got him set up with ice packs.

The 44-year-old said he'll be back on the mountain bike as soon as he's fully recovered.

"It's good exercise and I really enjoy it," he said. "I just have to realize that I'm not getting any younger."