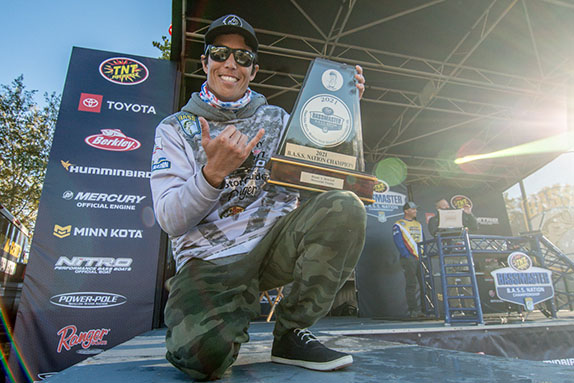 There's some decent bass fishing in Hawaii, where Matty Wong spent the first 24 years of his life. There's just not a lot of it and it's not real diverse.

"I caught peacock bass, largemouth and smallmouth growing up," said the 33-year-old Wong. "I learned through reading Bassmaster Magazine how to Texas-rig a worm and things like that and I had some VHS tapes of guys like Roland Martin and Jimmy Houston. I was one of probably less than 10 kids in Hawaii watching that stuff.

"My home lake, Lake Wilson, is on Oahu. It's about 6 miles long and it's basically a river that was dammed up. It winds around and has bends and it's a little bit similar to the Ouachita River. There's some laydowns, but we didn't have the opportunity to fish hydrilla or milfoil. I always fantasized about what it would be like to fish a rock bluff or a clear reservoir."

The Ouachita, in north Louisiana, is where Wong recently took a huge step toward realizing his goal of becoming a full-time professional angler. He averaged just under 12 pounds per day en route to winning the three-day B.A.S.S. Nation Championship with a 35-09 total.

The victory garnered him a berth in next year's Bassmaster Classic and an invitation (which he will accept) to compete on the 2022 Elite Series.

"I'm hoping to make a run for Rookie of the Year and I'd love to requalify for the '23 Classic so I don't have to go back to the Nation," he said. "I want to be on the leaderboard in at least one tournament and give myself a chance to snag a blue trophy."

Wong said his introduction to fishing occurred when he was 2 years old, holding onto his father's pants leg as his dad fished for tilapia with a bamboo rod on Oahu. He spent a lot of time saltwater fishing and free diving as a youth and was always fascinated by fish behavior.

"I've always been intrigued by what makes them tick – why they make certain decisions and the different traits between the species," he said. "I had a 6-month internship at Coconut Island, which is a marine biology institution, and I thought I might pursue that (as a career), but then I realized how much time it was going to take. I'd rather be in the field; I didn't want to be in a lab having to break down numbers."

A once-aspiring musician (saxophonist) and actor, he moved to California in 2013 with the idea of forging a career in the entertainment industry. While hustling around attempting to make that happen, he dove headlong into bass fishing, spending as much time as possible at a local pond. When his father's best friend from college, a man he called Uncle Bob, passed away, he acquired his first bass boat.

He spent nearly every weekend for the next 2 years on the California Delta, where he learned techniques such as flipping grass, punching mats and throwing a frog and a bladed jig. He relocated to the southern part of the state in 2018 to work as a professional photographer, lighting director and content creator and started fishing Castaic Lake, where the late Aaron Martens developed his legendary light-line game.

"Castaic is a challenging place," he said. "You can (throw big baits) all day and you might get one bite or you can go with micro-finesse. I knew I was in the right place to sharpen that knife and I learned to dropshot there, along with other finesse techniques."

Wong had won some local tournaments over the past several years, but never anything that even approached his B.A.S.S. Nation triumph. In fact, he said his most significant prior angling accomplishment was his 3rd-place finish in the Nation Western Regional at Lake Havasu.

He'll tackle an Elite schedule next year that will be a challenge in many ways. He'll place the order for the "Nation's Best" boat that B.A.S.S. will provide him for the season in the next couple of weeks.

He has sponsorship deals lined up with Megabass (primary) and Lateral Vision, a local clothing company, along with others in the works. A fellow Ventura County Bass Club member works as a financial advisor and he'll take advantage of that gentleman's expertise.

"Trying to turn this into a career comes with the responsibility of mapping out the finances and figuring out what the first year is going to look like," he said. "I want to approach it with the most business sense possible."