Christie's Fall Fab 5 Is Based On Forage 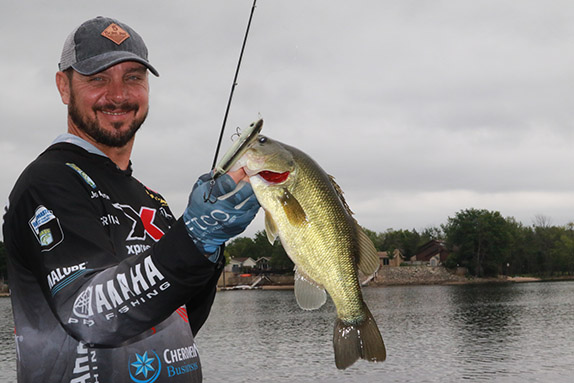 The fall bite is all about baitfish, so Jason Christie mostly uses baits that keep him on the move.

Jason Christie’s not a gluttonous guy. A former college basketball star who keeps himself in shape, the Bassmaster Elite Series competitor from Park Hill, Okla. knows how to moderate his meals.

Fall bass – not so much. That’s why Christie will soon be adopting an angling strategy predicated on exploiting the gluttony. But don’t mistake this for a one-stop buffet where bass can park their backsides and gorge at will.

Rather, Christie stresses the mobility factor necessary for autumn success.

“First of all, I’m going to cover water and if I’m going to do that, I need baits that allow me to fish fast,” he said. “A lot of times, fall fishing can be a little tougher than normal. But if you cover enough water, you’ll find places that have the right amount of bait — not too much bait, not zero bait.”

Indeed, when the calendar passes the Autumnal equinox, Christie shifts his tackle selection toward a lineup that'll help him track down those highly mobile fall bass, take advantage of concentrations he may find and also pick apart particularly attractive cover.

Here's a look at the first-stringers:

Frog: For targeting the matted grass beds that are starting to fragment, as well as pockets of pads or shady overhangs, Christie likes a Booyah Pad Crasher frog. That traditional walking-style offering handles a lot of his fall work, but Christie maintains a diverse arsenal. 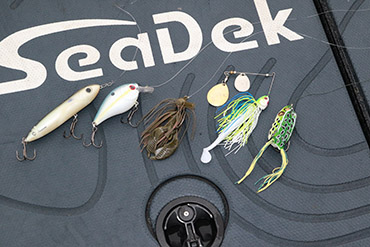 “If it’s windy, if the water’s dirty, if I need to create more disturbance, I’ll throw the popper,” he said.

Christie will tie both baits on 50-pound Sunline FX2 braid.

Topwater walker: For mimicking the lazy saunter of an ambling baitfish, with the ability to accelerate the pace and emulate that frantic fleeing motion, Christie likes a bone-color Heddon One-Knocker Spook. Complementing that enticing baitfish look, this bait features a single tungsten rattle within a sound-intensifying chamber that produces a loud thump. The way this rattle chamber is positioned in the bait also facilitates the classic walk-the-dog motion.

“It’s the rattle; that deep chook, chook, chook,” Christie said of his Spook preference. “It seems like that sound will call them out of deep water.”

Christie will throw his Spook around a variety of cover, from the outer edges of grass beds to laydowns and seawalls. One thing he stresses: Don’t overlook docks.

“I like to throw topwaters around docks to see who lives there,” Christie said. “In the fall, there are no boundaries — you’ll catch them in 2 feet, you’ll catch them busting bait in 30 feet. It’s really just covering water; keeping the bait moving.”

Notably, he’s found that adding a Lindy snap increases the bait’s action and provides a little more head weight to keep the nose down for a bolder, digging action. Also, replacing a loop knot, the clip allows Christie to change baits quickly.

“A lot of times in the fall, you’re fishing around smaller shad because they’ve hatched that year,” he said. “So, a lot of it is going to be smaller blades, like a No. 3 or No. 4 Colorado and a No. 3 or 3 1/2 willow-leaf. For me, the blade combinations are smaller in the fall than in the spring.” 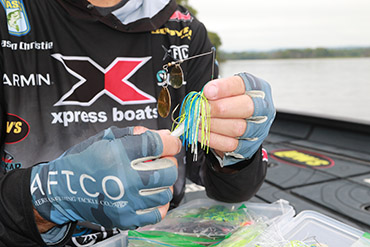 
Spinnerbaits are a critical fall tool and those Colorado blades work best in dirtier water.

As for blade style, Christie said he bases his selection on water color. The dirtier the water, the more he’ll rely on the round blade’s thump, but when he needs a faster pace for clear water, willow-leaf blades get the call.

Squarebill: For banging around rocks and wood, Christie prefers a BOOYAH XCS 200. The bait’s tight action allows for a faster retrieve that draws the reaction bites he’s looking for.

“If the water is really clear, I’ll go to a 100, which is a size smaller,” Christie said. “I’ll throw those two baits around (shallow cover) or under shad. If they’re breaking, I’ll throw the Spook, but if the shad are on top and they’ve already broken, then I’ll reach for a squarebill to go down a little deeper.”

“If I find an area that has a lot of fish, I can flip it around docks, woods and the edge of grass,” he said. “It’s an in-and-out presentation for me. If there’s a word that describes the fall, it’s ‘reaction,’ This time of year, there’s a lot of bait present, so you have to make your bait do something different for it to stand out.

“A lot of times, if I swim the jig, I’ll go to a white or shad color. But if it’s on bottom, I’ll use green pumpkin, black and blue, something like that.”

> Sell what they're buying: “One thing all these baits have in common, except the jig, is that they’re all shad profiles.”

> Keep an open mind: “One thing a person wants to remember is these fish move daily. They’re on bait; that’s their No. 1 priority, so you may catch them one day doing something and the next day, they may be in a totally different area and you may have to catch them doing something else.”