Big Bronzebacks Will Be Abundant In Finale 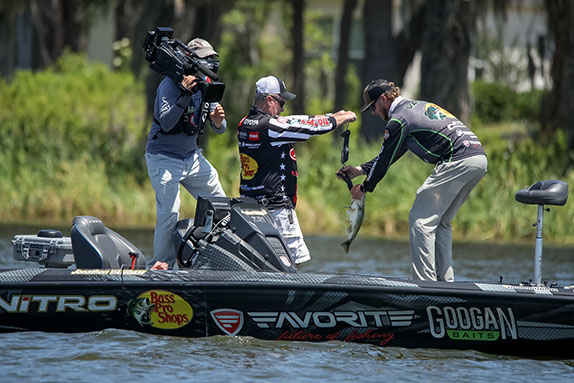 Jonathon VanDam (right) predicts that Bass Pro Tour anglers will need to catch 20 to 25 fish per day at Lake St. Clair to continue advancing in the event.

The MLF Bass Pro Tour is set to wrap up the 2021 season in St. Clair Shores, Mich. this week with the seventh and final regular-season tournament of the season. Competition runs Friday through Wednesday.

The six-day event will feature 80 of the best professional anglers in the world, including bass-fishing superstars like Kalamazoo’s Kevin VanDam, Ott DeFoe, Jacob Wheeler and local qualifier Scott Dobson of Clarksto , fishing for a purse of more than $805,000, including a top payout of $100,000 and valuable points in hopes of qualifying for REDCREST 2022, the Bass Pro Tour championship.

Lake St. Clair has played host to numerous MLF Pro Circuit (formerly FLW Tour), Toyota Series and BFL events over the years, but this event will mark the first time that MLF’s top-level, has visited the venue.

“I’ve been looking forward to this one. It’s going to be fast-paced, big weights and a lot of really big fish being caught,” said Jonathon VanDam of nephew of Kevin and an accomplished angler in his own right with two career wins and more than $650,000 in career earnings. “Lake St. Clair has been fishing really well. The fish should be starting to transition into their fall feeding patterns and I expect that we are going to have a really good week.”

VanDam said he thinks that anglers who do well in this event will dial in on the massive schools of smallmouth that the fishery is famous for, using typical smallmouth tactics.

“The biggest key will be trying to find the quantity and figuring out where those bigger schools of fish are living,” VanDam said. “It can be tough because there is a lot of water to cover out there, and there is fish on most of it.

“I expect we’ll see a lot of typical dropshot-type stuff,” VanDam continued. “I’ll have the Googan Baits Drag N Drop tied on and I think that bait will definitely be a player, as well as the standard tube and even a crankbait could really produce for some guys in this one.”

VanDam went on to predict that an angler will need to average 20 to 25 fish a day to be in very good shape, and that the Qualifying Round winners would likely weigh right around 140 pounds of bass over the first two days of competition.

Anglers will take off from the 9-Mile Ramp, located in St. Clair Shores, at 8 a.m. ET each day of competition. Takeous will be held in the same location beginning at 5 p.m. Fans are welcome to attend all takeoff and takeout ceremonies and also encouraged to follow the event online throughout the day on the MLF NOW! live stream and ScoreTracker coverage at MajorLeagueFishing.com.

As part of the event fans will also be treated to the Bass, Brews & BBQ Festival at Blossom Heath Park in St. Clair Shores, Sept. 9-12. The festival is a chance for fishing fans to meet their favorite Bass Pro Tour anglers, enjoy food and beverages from local food trucks and St. Clair Shores micro breweries, take in the on-the-water action at the MLF watch party, shop at numerous MLF sponsor and local vendor booths and enjoy live concerts from local musicians each day.

The event will feature anglers competing with a 2-pound minimum weight requirement for a bass to be deemed scorable. Minimum weights are determined individually for each competition waters that the Bass Pro Tour visits, based on the productivity, bass population and anticipated average size of fish in each fishery.

The 40 Anglers in Group A compete in their two-day Qualifying Round on Friday and Sunday, with the 40 anglers in Group B fishing on Saturday and Monday. After each opening round is complete, the anglers who finish in 2nd through 20th place from both groups advance to Tuesday’s Knockout Round, while the winner of each group advances directly to Wednesday’s Championship Round. In the Knockout Round, weights are zeroed and the remaining 38 anglers compete to finish in the Top 8 to advance to the Championship Round. In the final-day Championship Round, weights are again zeroed and the highest one-day total wins the top prize of $100,000.

The MLF NOW! broadcast team of Chad McKee, Marty Stone and J.T. Kenney will break down the extended action on all six days of competition from 8:45 a.m. to 5:30 p.m. ET. MLF NOW! will be live-streamed on MajorLeagueFishing.com and the MyOutdoorTV (MOTV) app.