BACK
It's A New Day

Zaldain Will Keep Hunting For Big Ones 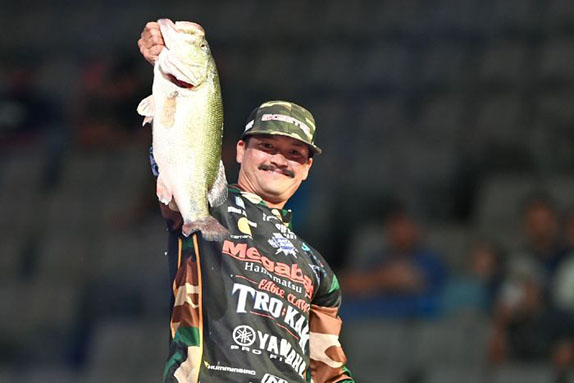 The 7-14 bruiser caught by Chris Zaldain was the second-biggest fish on day 1 of the Bassmaster Classic.

As avid fans of the professional bass fishing game might know, flip-flops are popular at the Bassmaster Classic this week as Lone Star State warmth envelops the Texas countryside.

On a day when stiff southerly breezes and partly sunny skies brought temperatures soaring to near 90 degrees at the 51st Classic being contested on Lake Ray Roberts, flip-flops were also a frequent topic in the aftermath of a day-1 effort that saw Alabama’s Steve Kennedy lead the way with five bass weighing 23 pounds even.

But it wasn’t the popular open-toed footwear made by Simms, Huk and other fishing apparel companies that most anglers were talking about in the Media Center of Fort Worth’s downtown Dickies Arena. Instead, it was how to avoid the infamous Ray Roberts flip-flop, a malady that no Classic angler wants to experience this weekend.

Chris Zaldain, a native Californian turned Fort Worth resident who has a growing body of experience on lakes in his new home state, knows full well the big bass riches that the first-time Classic venue can deliver. After all, he brought the day’s second biggest bass to the scales, a 7-14 giant that got B.A.S.S. emcee Dave Mercer plenty excited on the weigh-in stage.

But Zaldain, who insists he is fishing for many more fish in that size range, and even some bigger and pushing toward the 10-pound mark, also knows that a good day on Ray Roberts can quickly sour into a forgettable day 24 hours later.

“I know one thing about Ray Roberts, it’s a very flip-floppy lake,” he said in describing the on-again, off-again nature of the 25,600-acre reservoir. “Because it’s a flip-flopping kind of lake, hopefully I burned up my bad day today and tomorrow (Saturday) hopefully is a good day.”

Some would love to trade places with Zaldain, since he’s part of a pack of nearly two dozen anglers sitting within 10 pounds of the lead. But he knows that without a better day on Saturday, his hopes for Sunday afternoon will be dashed.

“One day it’s on, and another day it’s off,” said Zaldain. “I love Steve (Kennedy) and hope that he can stay on top of them, but this is the kind of lake where you can crack them one day and go back the very next day with the same thing – the same stretch, the same weather, the same everything – and not catch them.”

Zaldain explains Ray Bob’s flip-flop reputation as being a product of the lake’s smaller overall bass population. While most of the Classic pros are getting their first real experience on the North Texas lake this week, many have remarked that while the reservoir is loaded with some giants, the numbers are considerably less than what is found on other Texas water bodies like Lake Fork or Sam Rayburn Reservoir.

“The population of fish isn’t so great here,” said Zaldain. “So, there just aren’t a lot of them. When you find a few schooled up here, it’s not like you’ll find at someplace like Guntersville since there’s only one or two of them here.”

While he wishes no misfortune on Kennedy as the Alabama pro tries to protect his lead, Zaldain knows that the flip-flop nature of the lake a half-hour north of his Fort Worth home could let the Texan back in the Classic game pretty quickly on day 2.

“Anywhere in Texas, (and even here), a guy in 40th place right now (isn’t out of it),” said Zaldain. “John Cox weighed in like 4 pounds today and like, literally, he could be in the cut (tomorrow) with a 25-pound bag. It’s so possible here. A 30-pound bag is absolutely doable here.”

Zaldain will try and make that happen on a lake that is 4 feet higher than normal and experiencing water temperatures more typical of early to mid-May. He's "swinging for the fences" in this non-points derby that awards $300,000 to the winner.

The key on the event’s moving day is staying focused and keyed in on the subtle differences that can point the way and either make a good day great or a poor day lousy.

“You’ve just got to let the wind and the conditions tell you (what to do),” said Zaldain. “Everything (here) is like points-related. It’s all points, whether it’s a bush point, a rock point or whatever it is. You’ve (got to focus on that) and try to catch as many (good ones) as you can."

Zaldain says for him, tying to win the event he’s dreamed of capturing for much of his angling life, staying in the moment is easy.

“It’s not too hard to stay focused when you’re fishing in the Bassmaster Classic,” he said. “It’s like 8 hours of grinding, yes, but it’s pretty easy to stay focused (when the Classic win is your goal).”