BACK
14.25-Pounder From Conroe 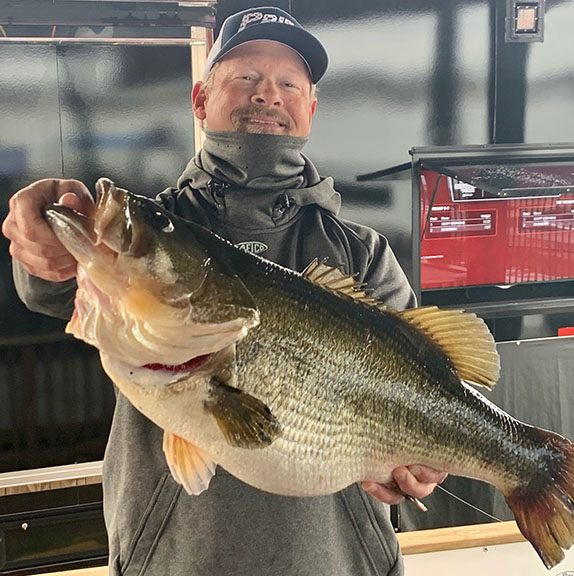 Scott Stephens said the 14.25-pounder he caught recently at Lake Conroe swam in circles like a shark before coming to the net.

Scott Stephens figures he can hold his breath for about 30 seconds.

He knows this because he says that’s roughly how long it took him to land a 14.25-pound bass at Lake Conroe last Friday during the Big Bass Tour hourly tournament and he doesn’t recall exhaling until his son-in-law netted the fish and lifted it into the boat.

The massive fish, caught on a square-bill crankbait over top of a brush pile, was weighed in during the 8 to 9 a.m. timeframe, the first hour anglers were eligible to weigh fish. It was the only bass heavier than 10 pounds caught during the three-day event and is the biggest bass caught at Conroe since the 15.93-pound lake record was caught in January 2009. It is also the biggest bass ever caught in the 22-year history of the Big Bass Tour, which holds events at various lakes around the country every year. The previous record was a 12.83-pounder also caught at Conroe.

“When she bit, I knew it was big,” said Stephens, who has fished Conroe for many years and hasn’t missed a Big Bass Tour event at the lake since its inception. “She came up and almost started circling like a shark. When I brought her up right under boat, she made three strong runs, but I had to baby it. I could see she only had one hook point in her. We netted it on the first swipe. She never jumped. When I got her in, I knew I’d won it.”

Stephens has caught big fish at Conroe before, including 9.35-pounder that took big bass honors in a tournament a couple weeks prior, but landing a giant in the Big Bass Tour has always been a goal. In 2018, his son-in-law, Michael Burks, caught an 11.32-pounder, but finished 2nd to an 11.92-pounder.

“A couple things on my bucket list were to catch a ShareLunker and win this Big Bass Tour,” Stephens said. “I got them both knocked out in one day. It’s a like a dream come true.”

For winning, Stephens and Burks took home a fully-rigged 2021 Nitro Z19 boat along with the $1,000 hourly cash prize.

Facing a slight north wind with overcast skies that spit rain to start the day, Stephens opted to target deep brush. He lost a decent fish on a crankbait right away.

“I knew the fish would be feeding, but we had cold water so I went deeper because of the storm and its impact,” he said.

He has plenty of Conroe’s brush piles marked on his Garmin electronics and by using Pantopix, he was able to pinpoint which piles were holding fish and how those fish were positioned.

“You could see them in the tops of the piles,” he said. “Many weren’t in the mood to feed, though.” 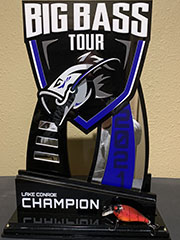 About an hour later, he connected with the giant while casting a Berkley SquareBull 7.5 in the special red craw pattern with a 7’11” Pride Rods composite casting rod while using 12-pound Seaguar InvizX fluorocarbon line.

“She was around the top of a brush pile,” Stephens said, noting the pile was in 18 to 20 feet of water. “I didn’t see her hit the bait. I was just casting to the area. I don’t know if I could’ve gotten that fish in without a net man. She had one hook in her mouth, so there was some divine intervention there.”

The mood in the boat was a mix of jubilation and disbelief. After they calmed down and got the fish in the livewell, Stephens picked up his rod and started casting again. It was 8:20 a.m. Burks, still stupefied by what he’d just witnessed, remained seated.

“It’s what we do, Michael,” Stephens replied.

It wasn’t much longer before they opted to head for shore and get the fish weighed officially. Stephens advised tournament officials that he’d caught a ShareLunker, referring to the statewide program that rewards anglers for catching bass weighing 8 or more pounds. After it was weighed for the tournament, the fish was kept in a tank on a release boat for a few hours before officials from Texas Parks and Wildlife arrived to examine the fish and arrange for its transport to the Texas Freshwater Fisheries Center in Athens, Texas.

“She’ll be in Tank 10,” Stephens said, “so I can go visit her over the next couple months.”

The fish measured 25 1/4 inches and had a girth of 21 1/2 inches. After the fish is done spawning, it will be returned to Conroe and Stephens will be allowed to release it back into the lake.

Stephens, who turns 57 on March 14, said it was just enjoyable to get back on the water after being without power at home because of the winter storm.

“It’s crazy to think what we were doing a week ago,” he said.